Good Chinese Wife, a memoir published by Sourcebooks, is a poignant tale that expats should enjoy about the overlap of China and the West. Susan Blumberg-Kason details her unfortunate marriage to a Chinese music scholar, as they meet while studying in Hong Kong and then travel to his hometown in Hubei Province before eventually settling in San Francisco, California.

The central question posed by their troubled relationship is whether their differences were due to culture or personality. Interracial marriages may have some problems, but are certain individual defects masked by the excuse of culture?

As their relationship begins, Blumberg-Kason appreciates her future husband’s background. She studies Mandarin as a postgraduate in Hong Kong in the early 1990s, and stays there through the time of the handover in 1997; readers familiar with southern China may find it interesting to compare that time with the current era.

The shy student falls in love with Cai, a handsome divorcé and ethnomusicology major. The fact that he raises the topic of marriage on early dates seems to be a source of attraction for her. In that sense, the cultural difference was an advantage.

The book goes over her travels to the Hidden River village in Hubei and subsequent meetings with Cai’s family, and serves as a good introduction to Chinese culture for readers new to the subject of China. Blumberg-Kason is very knowledgeable, and the book is peppered with quotes from Ban Zhao’s two-millenia-old, Instructions for Chinese Women and Girls, which contrasts well with the narrative.

The memoir deals with many hard truths, and Blumberg-Kason can be very frank with personal matters. The first sex scene comes as a shock to the reader, not because of graphic depictions, but because of the realization that the couple is engaged to be married yet they have not even reached that intimate stage. When she does get married, at the young age of 24, their passionless first night together during a honeymoon in a Hong Kong hotel foreshadows more troubles.

Time and time again, as the book progresses, Blumberg-Kason questions herself and accommodates Cai’s behavior; yet he doesn’t seem to care about his wife’s concerns. From the isolating vacations in his home town, to skipping out on going to a foreign-language bookstore in Shanghai and an interest in “yellow films” over his own wife, the reader wonders why she comes across so weak and why she puts up with him.

Blumberg-Kason tries to be patient and understanding, but comes to the conclusion – and feels guilty for doing so – that she cannot live in China after the couple finish their graduate studies in Hong Kong.

Numb, I continued to stand there and wonder if our cultural differences were greater than I could handle. Somehow this summer had gone all wrong…. Was it China, or was I the one at fault? Plenty of foreigners had braved rough conditions in China, but I had opted for the comforts of Hong Kong. Was I just not cut out for the mainland? Maybe I was nothing but a spoiled American. If my own husband could see it, wasn’t that proof? It was hard to know what to believe without the support network of my friends in Hong Kong or those back in the United States.

With Blumberg-Kason pregnant, they move to America, where the situation worsens. Cai does not adapt well to living abroad and constantly complains to her. Though Blumberg-Kason claims he is a good husband during her pregnancy, he grows more distant after their son is born and the book darkens in tone. In particular, when he gives her a STD and then denies it, the situation couldn’t be worse. Always trying to keep the peace, she repeatedly states that she didn’t want to know the truth about his private life.

Arguments over how to raise their son put a further strain on the relationship. Visiting a daycare center they’re considering sending their son to, Blumberg-Kason finds it much too dangerous, whereas Cai thinks it is fine because the owner is Chinese.

The setting sun cast a red stream of light on a small puddle near some of the shrubbery. Three industrial-sized paint buckets stood near a layer of wooden planks covering a hole in the cement. Several nails sprouted from the wood, their points facing the sky. As the tricyclists neared the planks, I winced, hoping the kids wouldn’t stumble on a stray rock and fly onto the boards, nails and all.

Although it soon becomes obvious that their marriage will not work, it takes a long time for the book to reach the point when Blumberg-Kason finally stands up for herself and leaves him. Cai even says to her, “You’re lucky I don’t hit you.” It is a sad state that this is a nonfiction memoir, and that so many real women stay in such relationships for far too long. Perhaps there is a lesson there about not rushing into marriage.

Good Chinese Wife is well written and reads like a page-turner novel, although it does get stuck in details at times. If it were a novel, the passages about student dances and descriptions of clothes and food might be cut due to not being relevant to the plot. But the book is a memoir, which is dense with everything Blumberg-Kason has chosen to share.

This book is recommended for readers interested in contemporary Chinese culture, as well as for anyone who has ever experienced problems stemming from cultural differences. 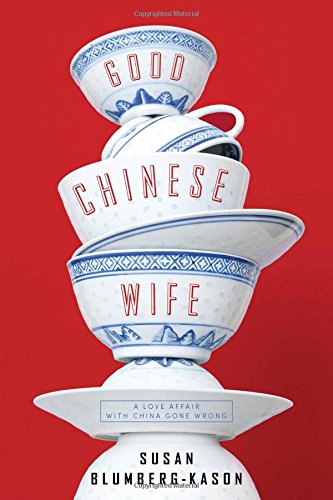 Good Chinese Wife is available at bookstores in Hong Kong and on Amazon. For more from this author, see Susan Blumberg-Kason’s blog at susanbkason.com.

The original version of this expanded review first appeared in the Shenzhen Daily.