Bridging East & West is a fast-paced and fun account of Kathie Wei-Sender’s long, fascinating life, from childhood dangers during the Sino-Japanese War to an arranged marriage and move to the United States, to a career in nursing and then a reinvention as bridge champion mixing with world political leaders. The memoir combines personal dramas, world events, and bridge. I’ve never played the card game but this was not a problem in understanding or enjoying it.

Throughout the memoir, Wei-Sender’s strong personality shines, and readers will not be surprised when she admits. “I must say here that I was frequently called the ‘Dragon Lady’ by my nursing colleagues because I was a strict disciplinarian.” 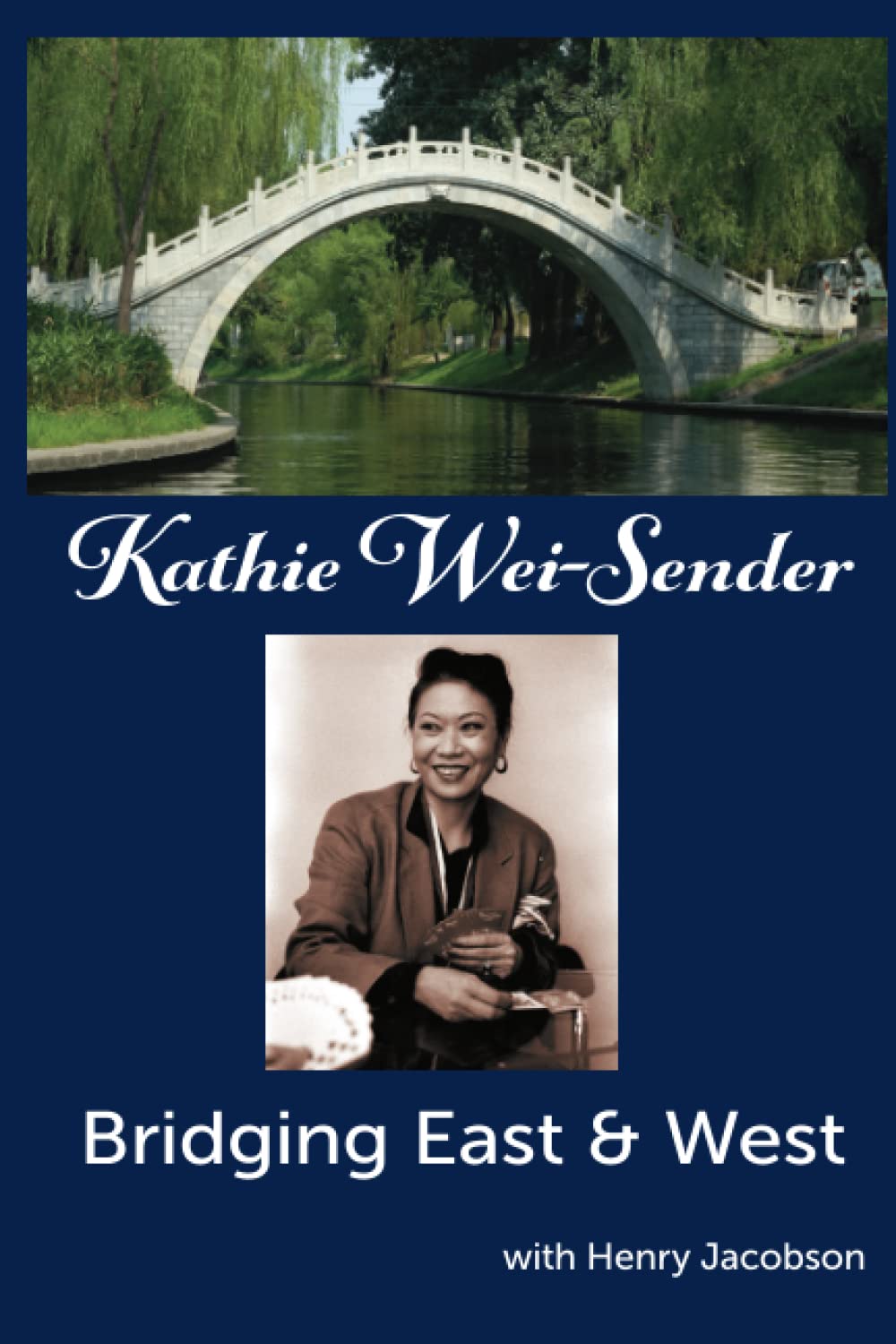 An intelligent overachiever from an early age, she says she was driven to accomplish so much because of a demanding mother. “I needed to earn not only my mother’s respect, but her affection as well. If only I worked hard enough, maybe she would love me.”

The strained relationship with her mother is a thread that runs through the book. These mother-daughter tensions were at a height when a husband was found for the sixteen-year-old girl. Future husband was Chang-Jui, a twenty-six-year-old heading to Columbia University.

I told her that I would agree to the arranged marriage, as long as she would let me enter nursing school. I so enjoyed her outrage at my impudence. I dug my heels in and she finally agreed to the deal. She convinced herself that my career plan was a youthful indiscretion I would soon outgrow… how wrong she was!

The post-WWII years were tough: the Chinese Civil War and high inflation which soon became hyperinflation. Her father was arrested on the suspicion of being an “a communist sympathizer” and accused “of consorting with the ‘enemies of the Republic.’”

Writing memoirs is harder than you might think, memories of our personal past and the background events of our lives not quite as solid as we imagine. Facts and stories merge and morph, unknowingly reshaped by the things we hear, read, and see. An example of that in Bridging East & West is the author’s post-WWII return to Shanghai. The explanatory text implies a city as still being under European control doesn’t match with the history of extraterritoriality ending in 1943.

The Europeans had their own civil authorities and police, and Chinese were often prisoners in their own city. One day not long after we’d moved there, I came upon a nearby park. Eager to run around in wide-open spaces, I approached the park’s entrance. A sign in English and Chinese barred me: “No Chinese or Dogs Allowed.”

This is commonly told story but almost certainly a myth; such a sign has escaped researchers attempts to track photographic proof of it. Interestingly, I didn’t notice a mention of this sign in the author’s earlier memoir, Second Daughter: Growing Up in China, 1930–1949, published in 1984, which concentrates on this pre-PRC period.

But back to the author’s move to the U.S. and the arranged marriage. Kathie’s parents managed to get a passport and work visa for her to leave Shanghai for the United States. “We were extremely fortunate to have friends in high places.” There’s a lovely photo in the book of the young author at the airport about to depart. The intriguing caption reads: “I left China as an 18-year-old and arrived in the U.S. as a 23-year-old.”

The backstory – and the memoir has lots of little gems like this in it, such as of an opium-smoking grandfather – is that her future husband’s brother was against the marriage.

He tried to stop me from getting a passport, using a little-known technicality that prohibited minors under the age of twenty-one from leaving the country unless accompanied by an adult. Thank goodness for Father’s connections! He spoke to another friend, an official even higher up in the Chinese government than the brother and within two days my birth certificate was altered.

The husband tells her, “Katherine, in time you will learn to love me.” While this love would not come and they would eventually divorce, there was at least some affection, and a lot of respect for this scholarly husband who worked as a translator in New York for the United Nations.

The author has her first husband to thank for an interest in the card game of bridge:

During one game, Ambassador Liu, the United Nations representative from Taiwan, turned to me. “Would you like to play?” I smiled and shook my head. Chang-Jui cut in on our conversation. “Kathie, don’t even try. Women are too emotional and undisciplined to ever learn how to play bridge seriously.”

This was like a red flag to a bull, and Kathie retorted: “Is that so?? Well, I bet I could learn to play bridge seriously if I tried.” Chang-Jui snickered. “Okay, I will bet you five hundred dollars that you cannot master the game of bridge in three months.” I quickly accepted.”

She won the bet. It was during her first bridge tournament that she met Charles (C.C.) Wei, her partner in bridge adventures, soon to be her second husband, and someone she calls her “soul mate.”

The second time they met was a “at a combination bridge and mah-jongg party hosted by Madame Chiang,” (as in Soong Mayling, wife of President Chiang Kai-shek). Wei was a well-known Chinese-American shipping entrepreneur and as such:

we attended political and charitable functions where we were on a first-name basis with many congressional leaders. Presidents Ronald Reagan and George Bush invited us to the White House. When Chinese leaders came to Washington, these presidents would seek our advice on matters related to Chinese culture and politics. It was exhilarating!

Husband Wei developed a bridge bidding system called the precision bidding system which helped take his wife to the top of the sport and also propelled, with the couple’s help as non-players, the Taiwan national team to remarkable success – a silver for the underdogs – at a world championship in 1969 in Brazil.

For their contributions to Taiwan’s bridge teams, Charles and Kathie were greeted as heroes when they visited Taipei. “President Chiang Ching-kuo, the son of Chiang Kai-shek, presented me with a special gold medal: a Chinese person had won a world event in bridge! He was so proud.”

The author has had a quite unique experience in terms of cross-Strait relations, having enjoyed friendly high-level interaction with both Chinas: the Republic of China (Taiwan) and the People’s Republic of China. Chinese leader Deng Xiaoping was a keen bridge player and he and Wei-Sender developed a friendship and became a coach for the PRC bridge team. A lot has been written about ping-pong diplomacy but the part bridge played in helping bring the PRC out of isolation was a new story for me.

Wei-Sender first returned to China in 1981, more than three decades after leaving, summoned by her father:

My father was dying. Through contacts in Hong Kong and Taiwan, I had learned about my family’s state of affairs. I finally received a single letter in my father’s spidery but still elegant calligraphy. “You must come now to our home in Hankow.”

She also met her mother on this trip. As for reconciliation, you can read the memoir to find out what happened. The author suffered another loss later that decade, her “soul mate” passing away in 1987, at the age of 71. In time, she would marry again, the third time to a Jewish immigrant from Europe, when she was in her fifties, he in his sixties, and they were married “for 27 wonderful years.”

Bridging East & West is a compelling read, proof that age need not be a barrier to writing a memoir. Kathie Wei-Sender, 91 at the time, ends the book on a moving note:

My blessings abound, however; I live surrounded by the warmth, love, and support of my family and friends. I am grateful I can still enjoy my children and grandchildren, and have a positive outlook on life, although I can’t say I like being old. My voyage continues—and they are my crew.

Bridging East & West is published by Jade Falcon Publishing and is available from various retailers such as Amazon.com.