Jen Paolini speaks with author John Saeki and reviews his The Last Tigers of Hong Kong.

Around the turn of the nineteenth century, Hong Kong stood as the backdrop to a spate of urban developments, transforming from “a barren rock” to a desirable port city in a matter of decades. Western expatriates flocked to this no man’s land inhabited by farmers and fishermen and met an unlikely neighbour from the north—the South China tiger.

“South China tigers are now considered to be functionally extinct in the wild, but in the past, sightings were reported regularly in the local English-language press,” explains John Saeki, journalist and author of The Last Tigers of Hong Kong, in an interview for the book review. On a balmy summer afternoon, we speak about the inspiration behind the work, why the existence of tigers in Hong Kong was not more widely accepted in the twentieth century, and the tiger stories that he remembers most fondly. 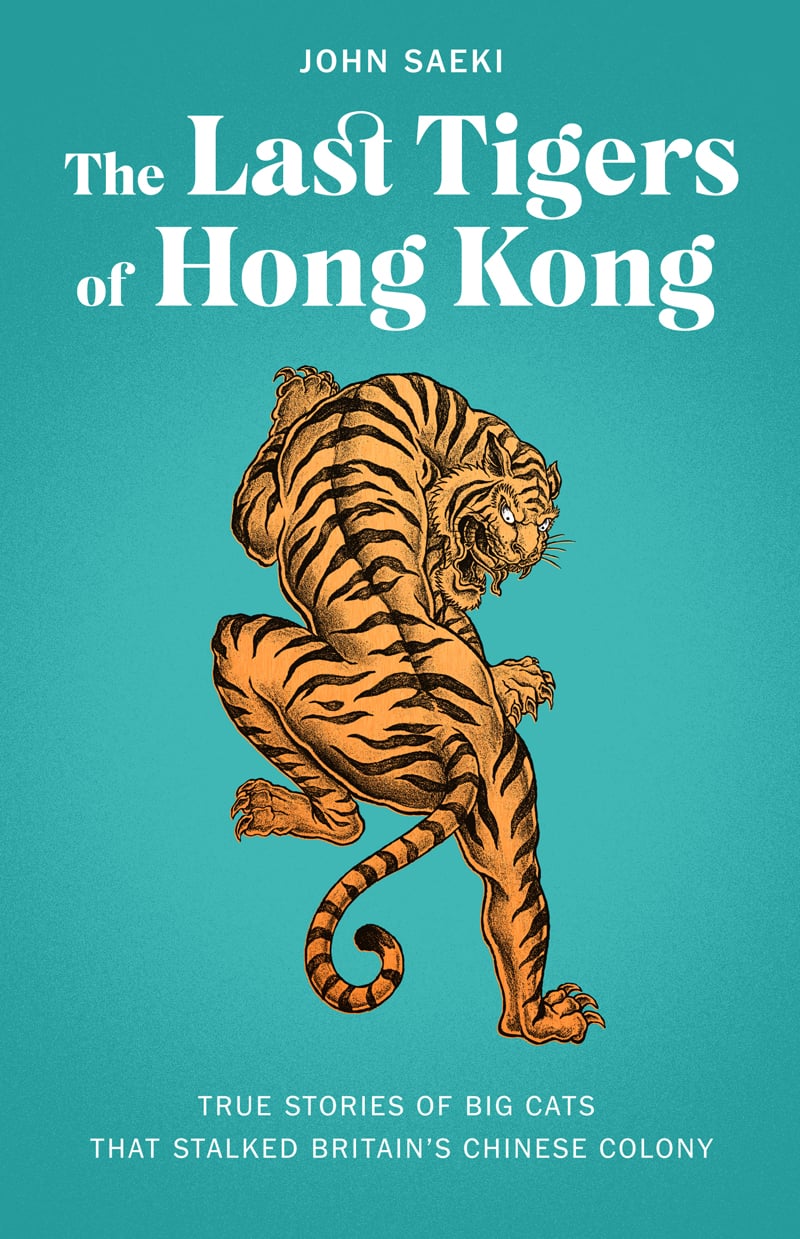 Originally from the UK, Saeki moved to Hong Kong in 1999 expecting dense urban life, but the wilderness beyond Hong Kong Island and Kowloon took him by surprise and triggered a fascination with the animals inhabiting it. Living on Lamma Island, he spent years exploring the city’s green reaches, but it was not until he came across an article on South China tigers—published in a newsletter by the University of Hong Kong’s Department of Ecology and Biodiversity—that his interest in the apex predators prowling Hong Kong was piqued. “What got me attracted to it in the first place is just the fact that it’s an absolutely awesome animal,” says Saeki. “We’ve all heard about the 1915 Sheung Shui tiger that killed two policemen, and then the 1942 Stanley tiger, but I started to discover that there’s more to tigers in Hong Kong than I thought.”

This interest led to the novel The Tiger Hunters of Tai O, published in 2018 by Blacksmith Books. His second book, also published by Blacksmith Books, is a collection of riveting true stories of big cats that stalked the New Territories hinterlands of Hong Kong, and often even ventured into urban communities in Kowloon and on Hong Kong Island. Following their spoors, Saeki delves into hundreds of news clippings from 1900 onwards to sort fact from fiction, presenting his findings in a compelling and entertaining manner that readers will enjoy sinking their teeth into.

The Last Tigers of Hong Kong takes us on a playful jaunt around the former Crown colony through the eyes of big cats, including the 1911 Stanley tiger, who swam across the harbour to Hong Kong Island, mauled livestock, and visited various islands in the archipelago; the 1914 Peak tiger, which stalked the affluent; a tiger with an appetite for frogs; the gods-fearing tiger of 1919 which spooked worshippers at a Kowloon City temple; and, of course, Hong Kong’s most notorious tiger, the aforementioned beast of 1915 which took a large party of British and Indian constables and local villagers to subdue. “One that really took me by surprise was the tiger that became a ship’s mascot,” recalls Saeki, speaking of a young cub that ended up on the British warship HMS Cumberland. He continues: “But the sheer number of sightings that were reported regularly in the press, that was probably the most interesting thing for me. What also fascinated me was the ongoing attitude of scepticism and sarcasm that only changed when the evidence was undeniable, and then it’s kind of like a real knowing. You know, ‘Well, of course, we knew about the tigers!’ but it was always ebbing and flowing.”

Discovering the existence of apex predators in your backyard would be a shock to anyone, and many foreign tradespeople who moved to the burgeoning city seeking their fortunes ridiculed news of tiger sightings, fuelled by the scepticism put forth by the local English-language press, which “loved a tiger story, but just to ensure no one would take them to be fools, they also loved to scorn a tiger claim,” writes Saeki. Members of the native community, however, had always known that the creature lurked in the wild, but their accounts were often dismissed.

Not everyone took the tiger reports seriously. […] There was a racist tendency to treat a local Chinese claim with more scepticism than a claim made by an Englishman. And a sexist tendency to take a man’s word to be of more value than a woman’s. […] If a European, or better still, a British person, a man especially, with a good job, like a clerk, a civil servant, or, best of all, a policeman or high-ranking army officer, reported one—well then, it goes down as fact.

For years, big cats were simply not accepted as part of the Hong Kong narrative—that was a distinction reserved for more “exotic” locales like India and the tropical jungles of British Malaya, where “tigers were reported with fascination and enthusiasm from the beast’s heartlands”—until irrefutable proof was laid before the elite dwellers of the Peak: tiger tracks in their own gardens. “It is impressive how quickly a tiger sceptic can become a tiger expert when he lives at the right address,” writes Saeki. Given the biases of the time, he suspects these reports were just “the tip of the iceberg.”

The tiger reports that made the Hong Kong press tended to be clustered around the few trading posts where foreign correspondents were stationed. It wasn’t that tigers concentrated around Amoy, Canton, and Pakhoi. It was because the vastness in-between was a dark unknown, where a nation of farmers tilled the soil, and wild beasts stalked undetected by the outside world.

Tigers roamed everywhere around Fujian, Hunan, Jiangxi, and Guangdong provinces. They didn’t care about administrative boundaries, and they didn’t do it for the benefit of foreign correspondents.

Educated Hongkongers knew that tigers were all around the region. But the grass-cutters, pig farmers, and cow hands of the colony knew better than that. They knew that Hong Kong was well within tiger country. The tigers weren’t next door, they were in the bloody backyard, and in the coming decades, the weight of the evidence would become undeniable.

From expounding on quirky local lore surrounding the “Lord of a Hundred Beasts” and exploring the Christianity-driven exploits of tiger hunter and missionary Harry Caldwell to detailing how China’s war on tigers in the 1950s drove the species to the brink of extinction, Saeki balances his narrative adroitly between anecdotes and pop zoology, supported by local artist Gary Yeung’s illustrations. With aplomb, The Last Tigers of Hong Kong documents the driving forces that caused the big cats to roam the city and the book stands out as an illuminating account for its uncommon subject matter, rarely explored even under the wider theme of Hong Kong wildlife.

The Last Tigers of Hong Kong is available from Blacksmith Books and various retailers.

About the Author: Jen Paolini

Jen Paolini is a Hong Kong-born lifestyle writer and editor who grew up between Europe and East Asia. She covers travel, culture, and dining and has a background in art direction, illustration, and visual design.