The epic adventure The Rose of Tibet is a stunning work from a largely forgotten writer. Lionel Davidson would make any shortlist for the best thriller writer of the last sixty years whom you’ve never heard of, let alone read. Of his eight novels, three won the prestigious Gold Dagger award from the Crime Writers’ Association: The Night of Wenceslas (1960), A Long Way to Shiloh (1966), and The Chelsea Murders (1978). British writer Philip Pullman described Davidson’s last novel, Kolymsky Heights (1994), as, “the best thriller I’ve ever read,” adding, “now Lionel Davidson is dead, I’m unlikely to read a better one.”

From the plot summary you might think The Rose of Tibet was pulp fiction tosh: Feckless teacher Charles Houston heads to India in 1950 on the trail of his brother – reported dead while filming near Mount Everest – and sneaks into the forbidden land of Tibet. After a perilous journey he arrives at a monastery of a thousand priestesses and becomes embroiled in ancient prophecies, deadly secrets, sacred treasure, and the Chinese invasion.

The novel, however, is better than it sounds. Admirers include Graham Greene (“I hadn’t realised how much I had missed the genuine adventure story until I read The Rose of Tibet.”), Peter Hitchens (“I tend to turn to The Rose of Tibet when I’m feeling a bit out of sorts, because it makes normal life feel so blessed.”), Barry Gifford, and Frederick Forsyth.

As well as gripping adventure, the novel also has romance and, unexpectedly, quite a few laughs. Take for instance the passage where Houston is a prisoner in the monastery, filled with dread at having to spend the night facing “the pent-up appetites of eighteen generations of she-devil. He saw that to survive he would have to exercise the combined talents of a Scheherazade and a demon lover, and he was not feeling up to it.”

It’s a testament to Davidson’s skill that he can inject humour without defusing the tension or distracting from the plot. One of the funniest passages describes the governor of Hodzo suffering a painful sedan-chair journey as he heads to the monastery to interrogate Houston. I won’t spoil the fun by quoting it here (other than mentioning that it involves an overinflated air cushion), and will instead give the lines that first introduce this memorable character:

The governor of Hodzo, at 67, did not account himself a cruel man. In the course of duty, certainly, he had had to exact some cruel penalties. Several hundred tongues and noses and eyes had been removed at his behest over the years. But these, essentially, were tributes to tradition; the governor had the highest regard for tradition.

Peter Hitchens says of the novel, “There is a journey in this book, from relative normality to almost complete terror, which outdoes every fictional adventure you have ever read.” Although that’s a little overstated, in terms of switching gears from plodding to breathtaking intensity I can’t think of anything else to compare to The Rose of Tibet. It’s such a slow-burner that I’m sure many readers skip the preface (don’t do that – make sure you read it) or simply put the book down after the first twenty or thirty pages. The main reason for the slow start is the author’s use of a strange framing structure of a story within a story. Davidson makes an appearance as himself, trying to obtain rights to and verify Charles Houston’s notebooks. Houston has disappeared, and the notebooks describing his adventures in Tibet are now in the possession of an old and dying Latin teacher. The framing devise is, on balance, a mistake; it adds a certain authenticity and, ultimately, suspense, but it makes for a dull beginning and also contributes to a denouement not entirely satisfactory in how much is left unexplained.

There’s an interesting back-story to the framing. In an amazingly honest interview broadcast in 1984, Davidson expressed his dislike for the book and how its unusual structure had come about. When Davidson started writing The Rose of Tibet, his first award-winning novel The Night of Wenceslas had not yet been published and he feared it was going to be a failure. Cash-strapped and discouraged, he set out to make his second novel a bestseller by studying the most popular Victorian authors – the likes of H. Rider Haggard and Robert Louis Stevenson – and deliberately harked back to that older style of bigger, more romantic story.

I … sped into the writing of The Rose of Tibet, which I greatly disliked. I don’t like it now. I think it’s awful. But I certainly didn’t like it when I was writing it. I had done quite a lot – about forty or fifty thousand words – and I simply found that I couldn’t sustain it. It was too exotic, it seemed to me to be too absurd.

Davidson thought the story was “balmy” and needed a framework; deciding on the latter gave him a “totally new lease of life.” In the novel, Davidson works for a publisher who is a thinly disguised version of his real-life one, notable left-wing British publisher and humanitarian Victor Gollancz (who famously published several early George Orwell books and then turned down Orwell’s brilliant account of the Spanish Civil War, Homage to Catalonia). In fact, Davidson used Gollancz’s actual name, and seeing as it was a rather unflattering portrait, the publisher understandably objected. Gollancz disliked the framework and thought the novel would be better without it. Davidson insisted on keeping it, but did change Gollancz’s name to Theodore Links. (Even that concession has a bit of word play in it – “links” means “left” in German, which Gollancz, the son of Polish-German immigrants, would have understood.)

Lionel Davidson died in 2009 at the age of eighty-seven. His life story is a remarkable one of upward mobility, the kind that is hard to imagine happening in our era of credentials. Born in the English port of Hull in 1922, Lionel Davidson’s was the youngest of nine children. His father, a Polish-Jewish tailor originally surnamed Davidowitz, died when the boy was two years old. The mother was an illiterate Jewish immigrant from Lithuania who spoke Yiddish to the children. Although Davidson showed a talent for writing at school, he had to leave early to earn a living. He found a job as an office boy at the Spectator magazine when he was fifteen, and worked his way up in the world of journalism and publishing. Whereas he prospered without the benefit of a university education, his modern counterpart would probably need a master’s degree just to secure an unpaid internship. And along the way from impoverished boy to professional writer and acclaimed novelist, he served as a submariner during the Second World War. Curiously, however, his eventful wartime service aboard submarines never made it into his novels.

The Rose of Tibet remains in print. I must note, however, that the Kindle version I read had an embarrassing number of typographical errors, and I see from the customer reviews on Amazon that the current paperback edition has the same problem. Faber and Faber should be ashamed of themselves for putting out such a shoddy edition of this excellent book. 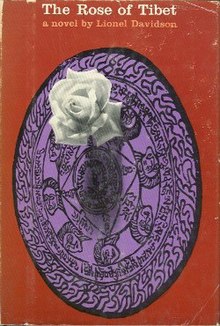