Home/Uncategorised/The Gunpowder Age: China, Military Innovation, and the Rise of the West in World History • Tonio Andrade
Previous Next

Tonio Andrade is one of the best historians currently writing about East Asia, and The Gunpowder Age (2016) is the best of his three excellent books. It expands on the Lost Colony’s comparison of European and Chinese military might during the 1660s, when Koxinga’s remnant Ming forces laid siege to the Dutch at Fort Zeelandia in southwestern Taiwan. In The Gunpowder Age he looks more deeply and broadly into China’s military development, comparing it with Europe’s, and shows us that China was more dynamic than usually assumed.

The Gunpowder Age is a model of what a popular academic book should be: academically rigorous yet readable, measured yet forceful. Andrade writes well (though I personally prefer a slightly more old-fashioned style) and with a novelist’s feeling for narrative drive. He’s fond of posing questions and this works well to signpost important points leading the reader through the material, and, in the case of cliff-hanger questions, getting us to read the next chapter. The author strikes a good balance when answering questions, giving multiple competing interpretations and also his own opinion as to which he considers most likely, but not dogmatically so. Finally, Andrade’s deployment of quotes is perfect; neither overusing them, nor choosing sensationalist ones that lack relevance. 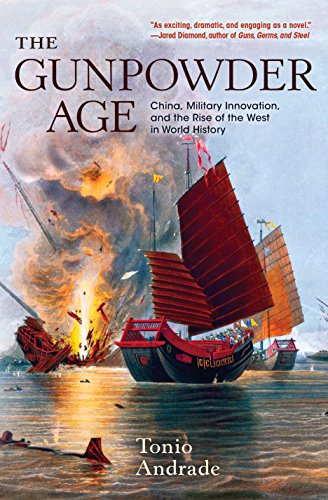 In The Gunpowder Age we explore conflicting views of the Great Divergence, the time when the West pulled ahead of the East. The “traditional” view of historians was that it occurred before the Industrial Revolution, while the “revisionist” view claims it occurred around 1800. Over the course of his research Andrade has moved from his starting position as a revisionist partway to the traditional.

The one-sided victory of the Opium Wars in the mid-nineteenth century helped create a Western perception of China as being economically, politically, and militarily stagnant. Andrade shows that there was a tremendous amount of innovation in China through the centuries, though there were periods of stagnation in military progress: “mildly for 1450 to 1550, and significantly for 1760 to 1839.” The First Opium War (1839–1842) – the West’s seminal encounter with China – came after a long period of stagnation.

China’s military stagnation has often been blamed on deep-seated cultural characteristics, chiefly the conservatism of the aloof and effete Confucians. Andrade believes this is wrong. His explanation can be boiled down to the proverb about necessity being the mother of invention. During China’s long periods of peace and regional dominance, there was no need for military advances. In contrast, for the constantly warring Europeans, innovation was a matter of life and death. The Manchu rulers of the Qing, China’s last dynasty, he says were in part “victims of their own success.”

Even as Europeans were making rapid strides in the science of war, China’s military power was atrophying because of lack of practice. By the outbreak of hostilities in 1839, Qing China had undergone a long period of relative peace, and its armed forces, once among the best in the world, had become weak and ineffective.

However, over the course of China’s history, when the Chinese faced danger, they proved, time and again willing and able to modernize. In the sixteenth century, for example, they quickly embraced European cannons and elements of European ship design.

Andrade dispels the myth of the Chinese inventing gunpowder but not using it for military purposes. They almost certainly invented the firearm, and deployed it in battle long before Europeans did: “By 1380 Ming policies stipulated that 10 percent of troops should be hand gunners; by 1466 the proportion reached 33 percent, a level not reached in Europe until the mid-1500s.”

The early Ming guns were small and used primarily as anti-personnel weapons. Large cannons capable of destroying walls were not then developed as occurred in Europe. Andrade makes the case that the difference in cannons was primarily due to differences between the types of walls built in China and Europe. Chinese walls were far less vulnerable to artillery because they were so massive; moreover, their tamped-earth cores were better at absorbing the energy of blows than were stone walls. The sloping angle of Chinese walls also helped deflect the power of strikes. Chinese walls seemed overbuilt for the practical task of protection, and this stemmed from walls having a strong cultural importance. Walls was synonymous with a city, political authority, civilization; as anyone studying Mandarin soon learns, the same character is used for “city” and “wall.”

Necessity, or the lack of it, was an important factor affecting innovations in artillery during the Ming dynasty. “After 1449, China entered a period of relative peace, while Europe entered a period of sustained, intense, existential warfare.” Whereas European states were fighting for survival, for nearly a century the Ming were supremely dominant, their military actions more like skirmishes than wars. Andrade suggests the Ming stopped improving their guns not because they were turning inward under the influence of conservative isolationists, but because there was no need for better guns. When that need did arise, they were quick to the challenge. Andrade says:

The Ming adopted Portuguese cannons in the early 1500s, Japanese and Portuguese arquebuses in the mid-1500s, and advanced Western artillery in the 1600s. One scholar argues that China’s adoption of such artillery was China’s first “self-strengthening movement.” And it was effective. Chinese artillery technology became in some ways superior to European artillery. Guns helped the forces of China defeat Europe’s two great seventeenth-century imperial powers: the Dutch and the Russians.

A core part of The Gunpowder Age is a comparison of Chinese and European military prowess during what Andrade calls “The Age of Parity,” roughly 1550–1700. He does this in part by examining a theory known as the military revolution model, which sees Europe having supremacy in four main areas: superior fortresses, ships, guns, and advanced infantry drilling techniques. The author believes Europe had an edge with its ships and fortresses.

After the First Opium War, reforms were attempted, though not with the needed urgency or staying power which were required to close such a massive gap. Andrade is right to say that “the Opium War was not in itself significant enough to shock the Qing into the deep-seated reform it needed.” China did not yet fear for its existence; after all, the enemy was fighting for trade privileges, not looking to overthrown the regime, and they could be bought off with relatively minor concessions like the granting of trading enclaves and the insignificant island of Hong Kong. Andrade gives a brilliant 1843 quote from a British newspaper editor dismissing fears that Napoleon’s old warning of awakening the sleeping giant would come to pass as China adopted modern technology and turned it on the Europeans.

The late struggle, was too short . . . and the national humiliation too local, to engender the widely-spread conviction among the Chinese of their inferiority in the warlike, or in any other arts, to the foreigners. . . . Experience tells us that very rarely has the pettiest rajah or predatory chieftain in British India, been content with the first drubbing he has received at our hands. Hence we deem another war with China sooner or later inevitable, in which case we shall, of course, be successful; but then we think the Chinese will be constrained thoroughly to feel and acknowledge their inferiority; and if so, their next defeat will, perhaps, be the precursor of their social advancement.

Imperial bluster indeed but spot on the money. It would take the Second Opium War to make the Chinese take military modernization seriously. The ensuing Self-Strengthening Movement made huge strides in forging a modern military and fostering related industries. History has, however, judged it a failure because China suffered multiple humiliating defeats against Japan. This is a harsh judgment; China didn’t so much do badly as Japan did exceptionally well. When Japan modernized they had the advantage of starting with a new political structure (the Meiji regime of 1867) and thus a free hand, whereas the Qing dynasty would limp on until 1912.

The problem for the Qing wasn’t a lack of technology or know-how. It was a lack of focus. Old institutions drained resources. Rulers balanced interest groups instead of creating a centralized military structure. In contrast, Japan started fresh. In the late 1860s and early 1870s, it swept away old military structures, abrogating feudal lordship and the samurai system. This left it free to focus on new structures.

The Gunpowder Age: China, Military Innovation, and the Rise of the West in World History is probably the standout book I read in 2017. This review doesn’t do justice to the range and depth of fascinating material covered in the book, or to the author’s ability to combine “big picture” history and telling detail. The Gunpowder Age is published by Princeton University Press, and is also available from Amazon.com and other retailers.