Home/Uncategorised/Bury What We Cannot Take • Kirstin Chen
Previous Next

Kirstin Chen’s novel Bury What We Cannot Take unfolds like a dream sequence, following the fictional fortunes of a southern Chinese family torn apart in 1957, eight years after the Communists’ victory and on the cusp of the Great Leap Forward. The violence and trauma visited upon millions of innocent Chinese in the first two decades of the People’s Republic are part of a story that is in danger of being lost since the emergence of China as a global power. Chen, a Singaporean, comes from a community that still holds memories of the terror, and she seems determined not to let those stories die and be buried with the generation who lived through them. 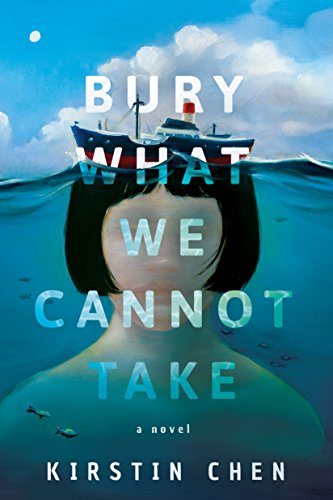 The novel is set in two places dear to this reviewer’s heart – Hong Kong, and Xiamen in southern Fujian, mostly in the sleepy, sophisticated streets of Xiamen’s Kulangsu islet. The islet in the 1950s had lost its status as an international settlement but still housed the wealthy and educated families who had made their fortunes trading with the European powers in the first half of the century. It is ostensibly a story about a family torn apart, experienced principally through the eyes of nine-year-old aspiring pianist Ong San San. She is the daughter and second child of a Kulangsu businessman, Ong Ah Zhai and his wife Seok Koon, both of whom descend from landowners, industrialists and capitalists, established Kulangsu families. San San lives on the top storey of her family’s Kulangsu villa with her mother, her older brother Ah Liam, and Ah Zhai’s mother Bee Kim. Ah Zhai’s father, a successful industrialist, has passed away, although he still casts a shadow over the story. The family’s servant and cook, too, join them in the top floor of the villa, but Ah Zhai himself is in British-controlled Hong Kong, a lifeline for his family’s escape from the PRC’s proletarian terror. The zealous new authorities, who are deeply suspicious of the wealthy and educated, have seized the remaining levels of the family home and re-purposed them for public services, a reality that the wealthy Ongs are still adjusting to. Bee Kim’s frustrations spill over one day and she vandalises a portrait of Mao Zedong – a crime that falls into the category of ‘rightist behaviour’. In thrall to his zealous education, the young and impressionable Ah Liam reports his grandmother to the authorities, beginning a chain of events that cascades out of control and delivers the novel’s primary thrust.

Following the trials of several tired and stressed adults and innocent children, Chen’s novel brings to life the very real tragedies that befell so many Chinese in the wake of the country’s takeover by Communist zealots in 1949. The tale colours Kulangsu and its quaint cross-cultural architecture, which are presented today on the islet and in UNESCO literature as an achievement. By contrast, in Bury What We Cannot Take, those same buildings trumpeted by UNESCO are the scenes of lives abandoned, families split up and chased abroad, and the homes have been carved up for all manner of public function. The streets and squares that today form the backdrop for a million pre-wedding photos, are instead used for public executions. Today Kulangsu is such an oddity that it’s easy to forget that the tourist attractions were once homes that housed families (the Lin Family Mansion, for example), and those families were easy targets for the rampant ideology that took so many lives in the Great Leap Forward and resultant famine, doing so much damage to mainland Chinese society. When Chen introduces them, the Ongs are among those who have thus far survived the turmoil, but their lives have been turned upside down and are spiralling out of control.

In Ah Liam, she presents an idealistic character who has fallen for the proletarian story of the new regime, and genuinely, naively believes he’s fulfilling his duty for the country. San San, the central character, represents the majority of young Chinese of the time – too young to have their say or even understand, but swept away nonetheless on one of the 20th century’s great waves of change. Bee Kim, old enough to have witnessed the nationalist takeover of China in 1911, carries the sadness of a friend lost to the most recent revolution, and it is Seok Koon who bears the burden of having to keep a family together through the turmoil.

Beyond the politics of the novel, Bury What We Cannot Take is also the story of three women and a little girl, and their fraught relationships with the same man – the flawed heir Ah Zhai, responsible for a fractured family and thrust into a series of crises only partly of his own making.

Chen’s descriptions of place are light and sometimes barely noticeable in both Hong Kong and Xiamen. And she indulges in some artistic licence when it comes to the geography of Kulangsu, which she admits to in the notes. At times the children behave like adults in the face of quite extraordinary adversity, making the story less believable in parts. It does, however, create a whimsical, fairytale-like atmosphere, and there are signs that this is a conscious decision. Tellingly, Chen uses the modern pinyin Chinese placenames for Guangzhou, Shantou and, most importantly, Xiamen, but neither Kulangsu nor its leafy streets and peaceful coves are ever mentioned by their Chinese names. Instead Chen uses the English translations: Kulangsu is “Drum Wave Islet,” and San San skips along streets with names like “Dragon Head Road” and she visits “Flourishing Beauty Cove.” This lends Kulangsu the atmosphere of a child’s utopia, something unique among the settings in the book. The final third of the story races away in short chapters that cut frequently between the characters, each chapter finishing on a cliff-hanger that leaves the reader desperate to learn what happens next. The story appears to race to conclusion as both money and time run short for the family, and Ah Zhai’s Hong Kong life unravels.

Late in the second decade of the 21st century, the world has been waking up to the noticeably authoritarian turn that events are taking inside the People’s Republic of China. The tentacles of Beijing’s censorship grow longer and sink deeper into Chinese societies inside the PRC and beyond. As Beijing seems to exercise more control over communications and language beyond its borders, we look to overseas Chinese communities like Chen’s to tell the stories that are suppressed inside China. But the stories of the horrors visited upon the mainland Chinese in the wake of the Communists’ 1949 takeover may soon die along with those who hold the memories of those events. Kirstin Chen’s fictional tale Bury What We Cannot Take goes some way to shining a light on the terror with a story about one family from the tiny islet of Kulangsu.

Bury What We Cannot Take is published by Little A (an imprint of Amazon Publishing) and is available from Amazon.com and various other retailers.

Readers may be interested in reading Robert Barge’s review of another novel set on Kulangsu, Nikki Chen’s Tiger Tail Soup.