Home/Uncategorised/The Real Taiwan and the Dutch: Traveling Notes from the Netherlands Representative • Menno Goedhart and Cheryl Robbins
Previous Next

When I came upon this Dutch-flavored guidebook in Jenny Wilsen’s independent bookstore in Taichung (gone the way of all flesh alas despite my NT$450 purchase) first impressions were decidedly mixed. Beautifully printed and lavishly illustrated, it looked, however, with its multitude of pictures of the author (over fifty of them!) and local food specialties, like a cross between a Tourism Bureau publication and a typical Taiwanese Facebook feed.

I admit I’ve always had a curmudgeonly attitude toward Taiwanese food tourism culture and especially the elevated reverence for traditional local dishes. In our hyper-interconnected world there’s a reason a food is only a local specialty: it’s probably not good enough to spread beyond that particular place. If a dish is sufficiently tasty (beef noodles, for example) or even middling (the likes of Chiayi turkey rice) then it will spread. As a result of this natural sorting, the “famous” local specialties you encounter are usually worse than normal everyday fare. There’s some nostalgia value for Taiwanese customers, but for Johnnie foreigner, the nondescript cookies, noodles, sticky rice balls and other offerings are consistently underwhelming. And it’s not because the modern versions are inferior to the originals. Let’s face it – most of these dishes were never very good; what constituted a treat for an impoverished peasant in the 1950s – when even white rice was something of a luxury – is going to struggle to impress in our current age of 24/7, all-you-can-eat buffetesque overabundance. 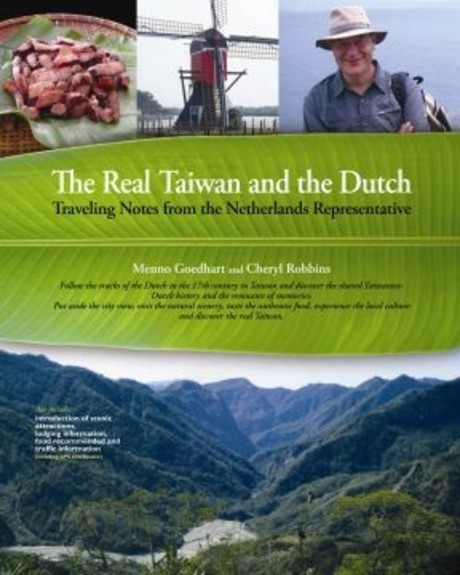 Happily, The Real Taiwan and the Dutch (2010) proved more substantial than I thought it would be. It’s a delightful book, and is highly recommended for travelers, residents, and history enthusiasts. The 270-page guide is dedicated to exploring Taiwan’s contemporary aboriginal cultures and the Dutch heritage from their period of colonization (1624–1662). There are hundreds of photographs, some maps, and lots of practical travel information: addresses, phone numbers, accommodation recommendations, and, as I mentioned earlier, a Taiwanese-level dedication to eating; restaurants and signature regional dishes are given a lot of space.

The book makes a wonderful supplementary travel guide alongside your main Lonely Planet or Brandt guidebook. There’s not much overlap, the authors purposely going off the beaten path. The focus is on independent travelers, in particular those willing to rent a scooter or car. GPS coordinates and names in Chinese characters are given as an aid to navigation. Accommodation suggestions are mostly interesting local B&B places.

The book’s main author Menno Goedhart was, from 2002 until his retirement in 2010, the Netherlands representative at their Trade and Investment Office, i.e. at the de facto embassy. Goedhart stayed on after his retirement, settling in Xinhua, Tainan, in the heart of Siraya territory to further his investigations into the Dutch heritage and continue his work promoting Dutch-Taiwan cultural ties. Although perhaps not immediately obvious, the two nations share more than an episode of seventeenth-century history; they’re both small countries with similar population numbers – Taiwan’s 23.5 million to the Netherlands’ 17 million – and both modern trading nations blessed with educated, outward-looking citizens.

The Real Taiwan and the Dutch covers the core Dutch area of Tainan, the Penghu Islands (strategically located midway between China and Taiwan, the Dutch had settled there briefly before being kicked out by the Chinese), the East Coast, Chiayi, and Pingtung, as well as a chapter on “Other Places” (including Danshui and Keelung, northern outposts where the Dutch built forts). Of Danshui’s old fort, he says the name often used, Fort San Domingo, is wrong. This earlier Spanish fort was destroyed and the current building completely Dutch, so it should be called by the Dutch name Fort Antonio, after Governor General Antonio van Diemen. Sounds reasonable to me, though I’m of course partial to Antonio van Diemen; it was his drive to explore Austronesia which led to Abel Tasman discovering New Zealand in 1642. Note how Fort Zeelandia in Tainan and New Zealand share a common etymological origin, being named after “Zeeland,” the westernmost province of the Netherlands.

Co-author Cheryl Robbins is a Taiwan-based writer/translator. She was working as a reporter for the English-language Taiwan News, when she interviewed Goedhart several times and discovered a mutual interest in the country’s aboriginal cultures. Robbins and Goedhart started doing research trips and writing the book before having found a publisher, but due to some coverage in Chinese-language newspapers on Goedhart’s project, he was approached by Taiwan Interminds Publishing. They published a Chinese-language version at the same time as the English version. (Yes, now all the restaurant coverage and food photos make sense!) No Dutch-language edition was produced, or needed; the English version was sold in the Netherlands, a credit to the exceptional English-language ability of the Dutch.

During Goedhart’s travels he was surprised by how widely the Dutch had traveled around the island. And how many people had a connection to the Dutch, either an oral traditional from the Dutch time and also how many claimed to have Dutch ancestors, something of which they were proud. We was welcomed on his explorations with great warmth, being adopted as a member of the Tsou tribe in Chiayi, made chieftain of the Rukai, and an honorary a citizen of Tainan. He comes across as a friendly chap and makes for a good tour guide.

Although casual in style, the historical information in the guidebook is top-notch. I was amazed (and slightly embarrassed) to learn about an important Dutch site just a 25-minute drive from where I live. Goedhart tells the forgotten tale of Fort Vlissingen, in the village of Haomeili in Budai Township, Chiayi County. Built in 1636, on a sandbar in the estuary of the Bazhang River, it was destroyed in severe flooding in 1644. A replacement fort was built on the opposite bank upon safer ground. Nothing remains of Fort Vlissingen, though Goedhart was able, with the help of an enthusiastic local researcher, to discover the likely site, now marked by a stand of old banyan trees. Goedhart also relates a story the Haomeili locals tell of how a Mazu statue (perhaps dating to the 1580s and the among the oldest in Taiwan) was brought inside the fort for protection during a flood, thus saved, and given the moniker “Governmental Mazu.”

As with Fort Vlissingen, going on the trail of Dutch-era ruins requires a certain talent for DIY augmented reality. Outside of the forts in Tainan and Danshui, there are few physical historical remains to see, so you have to superimpose the ghosts of yesteryear onto the often uninspiring modern landscapes/cityscapes. Not only does The Real Taiwan and the Dutch make the rediscovery of the past a lot easier by providing practical and rich background information, it encourages us to appreciate the people and places in Taiwan today.

The Real Taiwan and the Dutch is available from the Tribe Asia website.