E. A. Cooper served on Okinawa in the 1960s. His combat duty followed in Vietnam with the Third Marine Division, Third Tank Battalion. After his military service, he attended the University of Georgia, studied broadcast journalism and earned a doctorate in adult education. Cooper served as dean of evening administration with Albany Technical College in Albany, Georgia. He retired in 2014.

His semi-autobiographical novel The Okinawa We Lost describes the adventures and misadventures of young marine Timothy Cole, who is fresh off the boat in the GI paradise of Okinawa. Cole finds his first true love – a beautiful Okinawan nightclub hostess called Kimiko, and becomes embroiled in a wider drama of American-Okinawan tensions.

What was the inspiration for writing The Okinawa We Lost?

It wasn’t inspiration as much as it was a nagging concern for the girls who worked in the island’s many bars and nightclubs. Over the years, I couldn’t help but wonder what happened to them as they grew older. My thoughts on the matter eventually led me to make inquiries and, as the saying goes, “one thing led to another.” I would like to add that I’ve read that Okinawan girls now work only in establishments serving Japanese tourists, and that girls have been recruited from the slums of the Philippines to entertain American GIs. Also, I understand that in most cases the Filipinos are confined to housing provided by their employer. If that’s true, it seems to me to be a form of modern day abuse. Apparently, some issues only grow worse. I truly hope I’ve been misinformed. 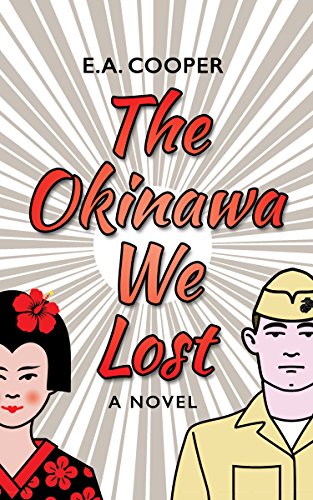 The period detail in the novel is fantastic. Does that come from your old letters, a diary, or did you do some research for the book?

For some reason, probably due to a lack of other talents, I have been blessed with very good recall. I did a fair amount of research, but most of my novel is memory-based. The research did help to validate my recollections and, in some cases, added detail to them. I’ve read that there is a natural phenomenon among people like myself, that while we may vividly recall matters from the distant past, our short-term memory can be faulty, as in “can’t remember what I had for lunch yesterday.” While that’s an exaggeration, I feel there is an element of truth to it.

Can you tell us something about your time on Okinawa in the early sixties?

The answer to that question lies in the novel. Truth be told, I loosely based the novel’s protagonist on myself. The description of work and play in the novel is, for the most part, an accurate depiction of my time spent there. At least, it’s how I remembered it. To some extent, minus embellishments and a few fictional occurrences, the book is close to being a memoir with names changed to protect the guilty.

Have you been back to Okinawa since then?

Not really. I was stationed in Okinawa from February 1963 thru March ‘64 and, a year later, while serving in South Vietnam, I returned to the island for a few days of R&R (rest and relaxation) and then again while in transit in ‘66. I did have an all-expense paid offer in 2016 to return in order to participate in a literature symposium. I knew Okinawa wouldn’t be the same, so I declined the generous offer in order to let my memories survive unaltered by time. Besides, it’s a really long flight, 18 hours one-way from my USA home-state of Georgia.

How do you feel about the continuing American military presence on Okinawa?

I regret it. Americans wouldn’t tolerate an influx of foreign troops and bases on American soil. It’s grossly unfair that we’re still on the island after more than 60 years since the end of the war, still refusing to leave. If we are so bound and determined to maintain a presence in the Pacific, we should relocate our troops and bases to Guam. It’s my understanding that they would be welcomed there, but it’s clear that the U.S. military prefers remaining in Okinawa. I’m sure the cost of relocation lies at the crux of the matter.

Do you have any recommendation for non-fiction books about Okinawa or for a novel set there?

As far as non-fiction, there are several, but I would start with Okinawa: Cold War Island, edited by the late Chalmers Johnson, an expert on Asian foreign policy. Another excellent book about Okinawa is Myth, Protest And Struggle In Okinawa by Miyume Tanji. In the fiction category, I believe that The Teahouse of the August Moon, written by Vern Sneider and published in the early 1950s, remains the most well-known novel written about the island. I think it’s wonderful that Camphor Press has re-issued Teahouse. People born since the novel’s first release may now become familiar with the tale of the early, post-war, military occupation of Okinawa. Naturally, I hope that readers will also take a look at my novel.

The Okinawa We Lost is in many ways a coming-of-age story with a cross-cultural romance at its heart. Any recommendations for novels describing such a romance set in Japan or elsewhere in Asia?

Offhand, I can’t think of any novel except mine that fits all of those categories: coming-of-age, cross cultural romance, and set in Asia. My personal recommendation, while it’s not a coming-of-age story—although age is a factor in the story line—is a cross-cultural romance of sorts. I’m speaking of the relationship between Madam Wu and the ex-communicated Catholic priest, Brother Andre, in Pearl Buck’s Pavilion of Women. Okay, maybe that’s a stretch, but it seemed to me to have undertones of romance, and it appealed to me for its subtle inclinations. Of course, a more obvious choice would be Michener’s Sayonara, but, like Buck’s novel, it’s not a coming-of-age romance, as the main characters are adults with accumulated baggage.

What are some of your favorite fiction/non-fiction works?

For fiction I’ll list, somewhat sheepishly, William S. Burroughs’ Naked Lunch. I can see myself wandering the back alleys of Tangier, looking for a good time. For non-fiction, I’ll go with David Halberstam’s The Best and the Brightest. I actually met and chatted with him. We watched an episode of “Monday Night Football” and quaffed a few beers together. He was a NY Giants fan. His death in a car accident was a shocker. I had hoped to talk with him again. Sadly, `twas not to be.

What kind of feedback have you had from readers?

Overwhelmingly positive, which for me is a disappointment. I’d expected to receive flak from right-wing types, given my disapproval of continued U.S. military occupation. Instead, it seems that conservative, military veterans have overlooked the politics of the book and just enjoyed the trip down memory lane. Hopefully, some of my readers recognized and disapproved of the injustices perpetrated on the Okinawan people and just haven’t commented on it. One can hope.

The novel’s title was originally B.C. Street. Why did you change it to The Okinawa We Lost for this new edition?

The B.C. Street that I mentioned in my novel no longer exists. The nightclubs have closed and been replaced with tourist shops, the once broad street has been reconfigured into two, winding, narrow lanes, and the street is now known as Chou Park Avenue, or Peace Park Avenue. Also, there’s a B.C. Street in British Columbia which may cause confusion for potential readers. And, when listing the book on eBay, because “Okinawa” is not in the title, the novel is not listed with other books in the Okinawa category. I felt that these issues warranted a change in title. To me, the storyline remains relevant, the issues borne out of military occupation still plague the island, but the title met its demise and needed a change.

The Okinawa We Lost is published by Camphor Press. It is also available from Amazon.com and other retailers.