Taking us from the Mongolian steppes to China’s imperial court, The Green Phoenix is an epic historical novel chronicling the life of a remarkable woman who shaped the founding decades of the Qing dynasty. In 1625 twelve-year-old Mongol Princess Bumbutai becomes a consort of Hong Taiji, soon to be the second emperor of the Manchu Qing dynasty. The marriage is a forced one for she loves Prince Dorgon, the half-brother of Hong Taiji. However, in a theme running throughout the novel, it’s duty over love, the greater good of one’s people over personal happiness – well, most of the time.

While there’s sadness in true love being only partially fulfilled, the sacrifice is worthwhile considering Bumbutai’s positive stamp on history. Her son, Fulin, would become the Shunzhi Emperor, and her grandson Xuanye would ascend the throne as the Kangxi Emperor at the age of thirteen, going on to become one of China’s greatest ever rulers. 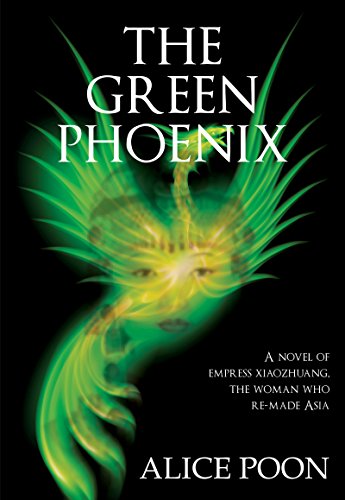 Author Alice Poon obviously loves her characters and Chinese history. She treats the historical story with great but not slavish respect, striking a reasonable balance between accuracy and narrative punch. Some authors tend to give historical female characters too much agency and therefore making them overly modern and relegating the historical element to an exotic backdrop little more than costume and décor. Conversely, strict accuracy can be too complicated and dull, and the cause and effect of actions too indirect.

Poon’s writing style is unusually lush. Personal tastes will determine whether you like the Turkish delight richness or think it’s overheated. Here’s an early passage with Bumbutai riding through the expansive Mongolian landscape.

On the rolling steppe south of the Gobi, burly grey winter had just stepped over the threshold, all set to stay well past his welcome as always. Coming from a distance, a burst of laughter like jingling silver bells rang through the snow-carpeted lakeside marshland. The lake within sight was a dormant sheet of cobalt ice, reflecting a pale blue sky decorated with wisps of cottony clouds. Echoes of the laughter, as soft as snowflakes, fell weightless on the sleepy marshland and melted away. Dreamy silence lingered as though not a wisp of air had disturbed it.

The decorative prose and attention to detail work well when describing clothes.

The young girl was clad in a purple felt tunic with same color leggings, topped by a luxuriously brocaded black-and-purple fur-trimmed deel, and shod in a pair of knee-high soft leather boots. Her silken black hair was dressed into two braids. Round the crown of her head she wore a multi-colored woven band from which red bead strands hung down the two sides of her face and the back of her head. From the richness of the material of her deel, one could tell that she must either be a beki from an aristocratic Mongol clan or a princess of royal Jurchen descent.

Sometimes, however, the writing is overly metaphor-heavy, such as in this sentence from a scene where Dorgon is thinking of his lost love.

In a flash, the image of Fulin appeared to him, twisting and twirling like a vicious tsunami, and tore to shreds the raft of daydreams to which was tied his very existence.

By the end of Bumbutai’s long life, stability and peace have come to the Qing empire. In the memorable closing passage following her seventieth birthday she travels to the remote mountain spot where Dorgon’s life had tragically ended many years before.

Her life had always been lived for other people and never for herself. For her grandfather, for the Khorchin Mongols, for Hong Taiji, for Shunzhi, for Kangxi and for the Qing Empire. Yet for her most beloved Dorgon, she had given so very little of herself. She wanted so much to tell his spirit everything that had weighed on her mind for so long. She was convinced that his spirit lingered still in that place of death because there had never been a proper entombment of his remains, and she chose to believe what she wanted to believe.

I admit to shedding a couple of tears over the closing pages as Bumbutai says goodbye to Dorgon. Another emotion on finishing the book was surprise, surprise at how such a fascinating historical figure has been so underappreciated and underrepresented in fiction. Alice Poon says an early source of inspiration was Pearl S. Buck’s Imperial Woman about Cixi, the Qing’s last Empress. I think the Empress Xiaozhuang story is every bit as compelling.

The Green Phoenix is a moving account of a great woman’s life, one which will appeal to fans of epic family sagas and Chinese dynastic history. There are the familiar pleasures of forbidden desire, royal splendor, court intrigue, and epic battles amid turbulent times, but here with the fresh focus on a less-familiar protagonist.

I found the story easy enough to follow, seeing as it’s chronological, follows a single life, and is based on history. However, the foreign names and complicated imperial relationships can be a challenge, so I was happy to see a list of characters at the back of the book.

Alice Poon is originally from Hong Kong, and the author of the bestselling Land and the Ruling Class in Hong Kong. She now lives in Canada and is working on her next novel.

The Green Phoenix: A Novel of the Woman Who Re-made Asia, Empress Xiaozhuang is published by Earnshaw Books, and is also available from Amazon.com and other retailers.