Home/Uncategorised/City of Devils: A Shanghai Noir • Paul French
Previous Next

City of Devils: A Shanghai Noir is a masterpiece, one that could probably only have been written by Paul French. This narrative non-fiction account of Western gangsters in 1930s Shanghai is I think his best work – even better than Midnight in Peking, which was an investigation into the unsolved 1937 murder of a 17-year-old British girl. With City of Devils Paul French is looking for another true crime bestseller, this time writing about the city he long called home and unhandicapped by a paucity of vital facts. 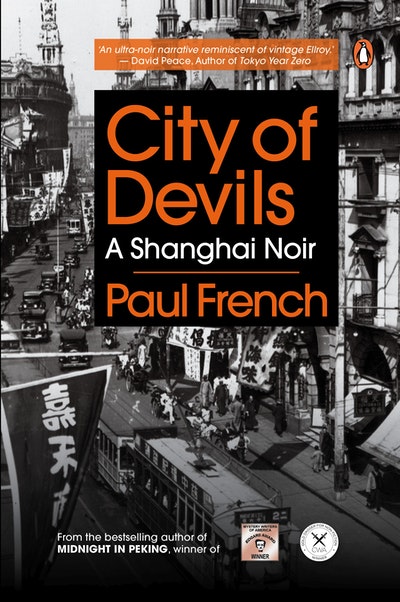 French takes us behind the scenes of Shanghai’s underworld by focusing on the rise and fall of two men; Joe Farren, a Jewish exhibition dancer from Vienna, and Jack Riley, an ex-U.S. Marine and escaped prisoner. Other reviews of City of Devils will outline the basic facts about old Shanghai and what happens to the men, so I won’t repeat that here. I’d rather explore some reasons why the book is so good.

First, we have a magnificent subject: Shanghai in the 1930s, with all the exotic glamour, intrigue, and action, including the Sino-Japanese war and the build-up to World War Two. The danger of writing about 1930s China, especially Shanghai, is that – because it’s such irresistible territory – it’s also overworked territory. Two problems ensue from this familiarity; the material can lack freshness, and then there’s the challenge of satisfying two audiences: those who’ve already read about it and those who haven’t. The solution is to find an aspect that has been little covered and/or unknown personalities, though finding obscure yet important and interesting facets and figures is easier said than done. By concentrating on Farren and Riley and the Western underworld rather than, let’s say, better known Chinese gangsters such as Big-Eared Du of Green Gang infamy, the story is new for both newcomers and the those well read.

A difficulty in writing about career criminals is that they’re – no matter how fascinating – almost by definition unsavory characters. To know them is not to love them, and as the pages turn and the crime sheet lengthens, you feel disgust at the trail of human suffering and unease about your perverse attraction to it. A few years back, I considered writing a true crime book on Taiwan and went as far as drawing up an outline of cases; there was more than enough material but ultimately I decided I didn’t want to spend a few years of my life with criminal scum, nor give them a measure of literary immortality no matter how small. So, how does French handle this problem? He has chosen two main characters who aren’t evil men. Farren is basically just greedy and a womanizer. Riley is violent and ruthless, but not the worst of the worst. His rackets – gambling and drugs – are things that a Libertarian would argue should be legal in the first place. Importantly, French lets us know early on that Farren and Riley will not have happy endings; we can read the story in the comfort of knowing karma will be dealt. In particular, Riley will get his comeuppance. City of Devils begins with the preview of what’s in store for the American. In the opening scene, we find him desperate and friendless, on the run from the police.

Crouched by the window he hears the end, the growling engine of the Red Maria. Men spill out the back, taking up position in full body armour – they’re expecting him to shoot it out. The Municipal Police Riot Squad have come with wide-bore guns, the safety catches flicked off, corporals shouldering ugly Chinese knock-off Mauser M.1896 semi-automatics with broom-handle grips – old-school and nasty. There are huge white boys with the red hair of Ireland, the meanness of Ulster, and the menacing grins of England; oil skin-clad Sikhs standing ramrod straight, hand-picked for the elite squad and armed with .303 carbines. Snipers take up positions, alongside a man with a teargas bomb.

The Young Allen apartment complex is strangely silent. The Riot Squad won’t hesitate. Their standard orders? Shoot to kill, then count to ten. How the hell had it come to this? Jack slides under the bed frame in the hope it’ll offer some protection. He stares up at the rusty springs of the iron bedstead; he can almost feel the men’s fingers caressing the triggers outside. Maybe he’ll be Lucky Jack just once more . . . before it all gets shot to shit.

Readers can continue the story knowing justice will be served, though French keeps us hanging to the end to find out whether Riley will be taken alive.

The passage I’ve quoted above highlights several features of the writing. It’s gritty, bold, caffeinated prose: Paul French unleashed. The subtitle says “A Shanghai Noir” and that’s what it is. With the imagined thoughts, emotions, and minor unrecorded actions of the players, this is obviously far from straight history. Yet with the quality of accompanying factual details, the speculation doesn’t seem unreasonable; and if someone is going to reanimate 1930s Shanghai it might as well be French. You’ll also have noticed the passage is written in the present tense. I’m not normally a fan; it was only mildly jarring in Rob Gifford’s travelogue China Road; in David Mitchell’s historical novel The Thousand Autumns of Jacob de Zoet, I found the present tense so off-putting I never got more than a few chapters in. However, French’s use of the tense works in City of Devils. It matches the cinematic noir quality of the book and the rich level of detail, bringing, I think, an immersive intimacy to the story.

The prose in City of Devils has a mid-Atlantic feel to it reminiscent of Raymond Chandler. That’s not just because it’s a noir book – and like rock n’roll best done in an American accent – or even that one of the main characters is an American. In all his work, French displays a hybrid British-American flavour. There’s the British love of history and tradition (though with some modern egalitarian sensibilities), cynicism and humor; and then there’s the American boldness, a larger than life brashness. French is no shrinking violent in real life and he brings this to the page. City of Devils has personality in spades, perhaps too much personality for some readers. Thankfully, he has shown admirable restraint in several areas; given the author’s knowledge of 1930s Shanghai, he had a huge cast of potential characters, but does well to limit the number. In addition, he does minimal recycling from his other books. For example, French doesn’t draw on his writing (including a biography) about Carl Crow, who was an influential American adman and journalist in Shanghai of the 1930s. Not one mention. Nor does French overload the story with background information. The Farren and Riley stories drive the narrative and don’t feel like mere convenient frames for hanging historical facts.

City of Devils: A Shanghai Noir is a fun, fast-paced ride. I think writing it must have been fun too, though definitely not fast; there’s years of work on those pages, and decades of reading and research behind them.

The book comes with useful maps, contemporary newspaper clippings, great old photographs, and a glossary to help with the treaty port and gangster slang of the era. City of Devils is published by Penguin Books. It’s available from Amazon.com and various other retailers.