British travel writer David Leffman has written numerous guide books, including ones for Australia, China, Hong Kong, Indonesia and Iceland. He is also the author of The Mercenary Mandarin: How a British adventurer became a general in Qing-dynasty China, which tells the amazing story of Jersey-born William Mesny. Mesny ran off to sea as a boy and jumped ship at Shanghai in 1860 when he was just 18. He became a smuggler, a prisoner of the Taiping rebels, a gun-runner and finally enlisted in the Chinese military.
After five years of fierce campaigning against the Miao in remote Guizhou province, Mesny rose to the rank of general and used this privileged position to travel around China – to the borders with Burma, Tibet and Vietnam – writing opinionated newspaper articles, collecting plants and advising government officials on the development of railways, telegraphs and other modern reforms. Mesny eventually settled in Shanghai with a 16-year-old concubine and published Mesny’s Chinese Miscellany, a weekly magazine about his experiences.
David Leffman spent over fifteen years following Mesny’s travels across China, interviewing locals and piecing together his life story from contemporary journals, private letters and newspaper articles. 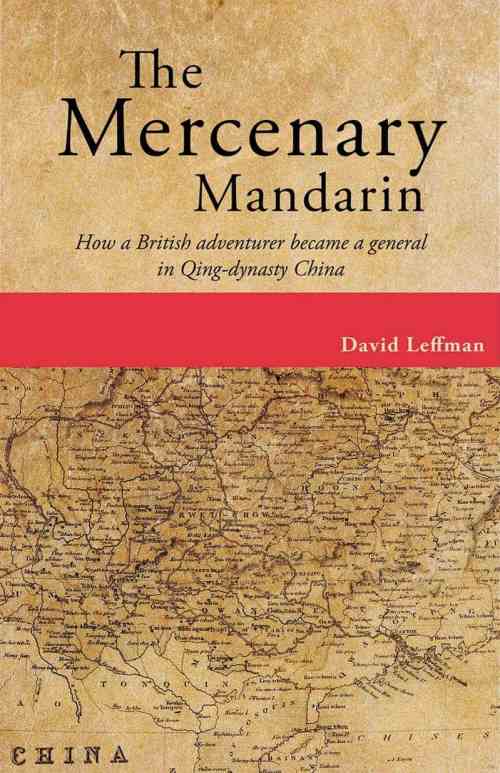 How did you come across the story of William Mesny? When/Why did you decide to write a book about him?
Miao villagers in Guizhou first told me about their nineteenth-century war against the Chinese government while I was drunk with them at a three-day festival in 1998. What really made an impression was that apparently three million people had died in this war, and I had never heard of it. When I began to research the conflict, Mesny’s name kept coming up as an eye-witness who had fought on the Chinese side and then written up his experiences many years later in a weekly magazine, Mesny’s Chinese Miscellany.
When I tracked down a copy of the Miscellany I was a little confused and underwhelmed; it seemed to be a completely random collection of short pieces about long-since redundant aspects of Chinese life – although Mesny also included thrilling extracts about his life and adventures.
About ten years later I picked the Miscellany up again, having spent a good deal of that time travelling China’s back roads as a guidebook researcher, and realised that I had unwittingly footstepped Mesny halfway around the country. I recognised temples, guildhalls and remote villages that had survived from his time, became intrigued, and began to do some archive research. It slowly dawned that I had a story: he had sailed around the world, been a gun-runner, a smuggler, an arms instructor, a prison warder, a prisoner of the Taiping rebels, an advisor to several important Chinese statesmen, a plant collector and a decorated general in the Chinese military.

What travel and research did you undertake for The Mercenary Mandarin?
I followed Mesny around China over a fifteen-year period, unintentionally at first and then deliberately. He spent much of his time in the southwestern provinces of Guangxi, Guizhou, Yunnan and Sichuan, but his travels took him – and me – as far afield as Xinjiang and the borders with Vietnam and Burma.
As for research, I spent months surfing the internet for Mesny-related hits: I’ve uncovered “lost” photos; read a small library of books, period newspapers and the private journals of people who knew him; and visited archives in the UK, China, Macau and Hong Kong. And that’s not counting the Miscellany itself, which runs to about 2000 detailed pages. I also tried to locate all the battlefields where he fought against the Miao in Guizhou, and spent time interviewing villagers about the stories passed down from that time.

Why did it take you so long to complete?
Partly because I was fitting Mesny into rare moments of spare time in between paid freelance jobs, but mostly because I’ve always had to work to tight deadlines and this was a rare chance to set my own pace – and rework the text until I was happy with it.

Why did you choose Blacksmith Books?
I spent months failing to find a UK agent who would represent me, despite everyone agreeing how hot China was as a topic. Some were quite positive about the text, but nobody thought they could convince a publisher that the book would sell. As one agent put it bluntly, “Nobody’s heard of you or Mesny, so there’s no hook”.
Then I remembered Pete Spurrier of Blacksmith Books in Hong Kong – I’d used his hiking guides extensively, and we’d even met once through a mutual friend. His catalogue focuses on regional non-fiction, often involving the foreign perspective of China, which fitted what I had to offer. When I finally thought to approach him he agreed to publish the manuscript fairly quickly.

Can you explain the title, The Mercenary Mandarin?
Well, I was looking for a title reflecting the alliteration of his own Mesny’s Miscellany, and it just popped out one day, very early on in the writing process. It seemed natural; Mesny started his career in China as a mercenary, and later served as a Chinese official, a mandarin. I never really needed a working title.

It’s wonderful that you’ve produced an account of a Westerner who – until your book came out – was unknown to even diehard Old China Hands. How do you think having such an obscure figure as your “lead character” will affect the popularity of the book?
Well, as I mentioned above, it made finding a publisher difficult. But there are so many different aspects to Mesny’s life, which I hope will appeal to a wide range of readers: there are his richly-described travels around China’s remote, little-known hinterlands; his marriage to two Chinese women; his adventures on the battlefield; his detailed observations on daily life in China, seen from both the Chinese and Western perspectives; his plant-collecting activities (he had two new species named after him); his close association with – and descriptions of – several historically important Chinese officials; and his increasingly disastrous career after he settled in Shanghai, where he was ruined through being implicated in an illicit arms deal… the list goes on. And Mesny isn’t entirely obscure. His birthplace, Jersey, even issued a set of six stamps illustrating his adventures in 1992.

What are your writing habits?
I hate being interrupted, and if I didn’t force myself to do other things – eating, exercising, etc – I’d probably roll out of bed at 6am and stop writing around 10 at night. Actually I pretty-much used to do this, but nowadays I’m happy enough if I work eight hours a day. That’s when I’m not out on the road for months at a time, researching travel guides.
My favourite tip to pass on: never make major corrections until you’ve completed the whole first draft – just note where and how text needs to be rewritten and plough on. Otherwise you’ll never finish.

How did you get into travel writing?
I trained as a photographer, but after I’d left school I spent as much time as possible travelling in Europe and Africa. I’d used a few guidebooks and one day thought “I could write one of these”. So I approached a few publishers and got lucky; it was the late eighties and a decade-long travel boom was just beginning. My first guidebook was the Rough Guide to Australia (I’d just emigrated there); then came China, Indonesia, Hong Kong and – as light relief – Iceland. What with side projects, guidebooks for other companies and keeping all these titles up to date, I was pretty busy for the next twenty years.

Is it possible to make a living as a full-time travel writer?
It is, but it’s extremely difficult: to get started you have to be persistent, flexible, and prepare yourself for poor pay and worse conditions. To be honest, nowadays I’d rather edit than write – the money is much better, and afterwards I can travel for fun.

What regions did you cover for the China Rough Guides?
I’ve covered nearly all of China at one time or another, with the exception of Dongbei and Mongolia. My real focus has always been on the southwest though.

Online reviews – such as those on Amazon and Good Reads – seem unfairly harsh for travel guides. Why do you think this is? Does it bother you?
Long before the net existed, I was getting irate letters from readers: they hated my hotel and restaurant recommendations, they hated the country I was writing about, they hated me. In an alien land, you place an increasingly desperate trust in your guidebook to steer you towards a good time, even safety: if it lets you down, you’ll never forgive it – or the author. Nowadays – and occasionally even back then – you also get a lot of negative postings from businesses who can’t accept that you prefer their rival’s services.
Flak doesn’t bother me too much – if you’re prepared to take praise, you have to accept criticism too – though I don’t like letting readers down through genuine errors.

The Mercenary Mandarin: How a British adventurer became a general in Qing-dynasty China is published by Blacksmith Books.

To learn more about David Leffman and his books, visit www.davidleffman.com.