To get a closer, more insightful look at modern China than you do from reading Wish Lanterns, you would probably need to learn Mandarin, marry a Chinese woman, move to China, and live with your in-laws.

Wish Lanterns follows the lives of six young Chinese born between 1985 and 1990. This is the generation with no memory of the 1989 protests. They grew up with the post-Tiananmen bargain of greater personal freedoms and the chance to get rich in exchange for obedience to the Chinese Communist Party (CCP).

The six young people featured are not a cross-section of Chinese society. They have all been to university and spent time in Beijing. We don’t get a factory worker, labourer, soldier, or farmer. But at least they’re a colourful crew: there’s Lucifer, the rock rebel struggling to be a star; military child and engineer Dahai; internet gaming addict Snail; intellectual Fred; dreamer and small business owner Xiaoxiao; and fasionista Mia (who at the age of 17 got her first tattoo – of an AK-47 rifle with the words ‘Bang of Youth’ in English). Although this selection sometimes results in atypical stories – like Lucifer winning a Global Battle of the Bands contest – it also makes for fun reading.

Wish Lanterns does a good job of showing that the characterisation of China’s young generation as often being materialistic, spoilt, and apathetic is unfair. They might not be sweating in the fields or factories as did their parents, but they face a gruelling education system, a tight job market, overpriced housing, and unique marriage pressures. Although there’s some truth to the stereotype of the Little Emperor Syndrome, it’s usually just a short phase restricted to early childhood. As Ash points out, demographics ultimately work against the generation of only children:

Where in early years there are four grandparents and two parents to shower attention on one child (the rule of 4-2-1), in adult life this reverses so that an only child has to provide for two ageing parents and four retired grandparents (1-2-4).

In 1991 the CCP launched a patriotic education campaign and it’s interesting reading Wish Lanterns to see the nature and amount of propaganda in schools, and how much was white noise, how much was absorbed or rejected, and how views change with time and circumstances.

Fred sat through two classes a week, each of the fifty minutes dragging endlessly. Modules included ‘Mao Zedong Political Thought’, ‘Deng Xiaoping Economic Theory’ and ‘Jiang Zemin’s Three Represents’. The dominant historical narrative was that the Communists liberated China after a century of humiliation at the hands of foreign powers. Whether the purpose is to drill political consciousness deeper, or bore the class out of having one at all, is unsure. Fred preferred to stare out of the fifth-floor window at the coconuts dangling outside.

Wish Lanterns gives us a rare ground-level look at dating and marriage. Men don’t have it easy: “There were three ‘haves’ expected of a man: a flat, a car and savings.” Given the skewed sex ratio and the resulting shortage of women, you might think they would be better placed. However, women have pressure to get married in their twenties, which gives a very short window of opportunity after graduating. And given the expectation that women should marry up or at least at the same educational level, being a graduate also shrinks the pool of eligible partners: “One cruel barb popular on campuses summed it up. There are three genders, the joke went: male, female and female Ph.D.”

Alec Ash writes with affection, honesty, and a deep knowledge of contemporary China, especially of Beijing, where he has lived since 2008. Born in England, Ash studied English literature at Oxford, and later Mandarin in China. He writes for a living and is also actively involved in the writing community in Beijing, having cofounded a writers’ group called the Anthill and co-edited a recent anthology called While We’re Here. 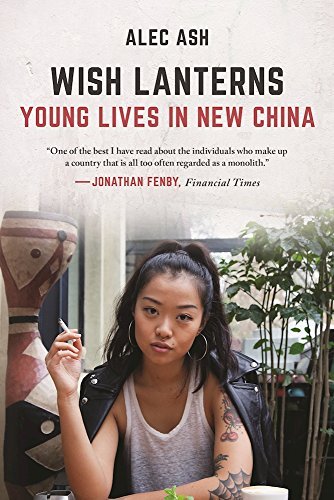 The cover of the U.S. edition.

While the author admirably keeps himself out of the book, his presence is still there in the writing. The experiences of his cast of subjects are told in the third person, an approach which carries the danger of depriving the characters of a distinctive voice. Thankfully, the author’s superb writing largely negates this and the subjects are well served by having their stories told in an efficient and fluid manner. The structure of the book is simple and unforced, and there’s no attempt to overplay narrative arcs.

A strength of the writing is the details in the book that give the colour of place and time, things such as specific television shows watched, music listened to, and social media slang used. Writing about Dahai’s university days:

His favourite haunt was Zebra cafe, named after an oddity of the local dialect in which a zebra – ge banma – sounds like the slang for ‘fuck’. Dahai and his friends holed up there to chain-smoke and play board games set in ancient Chinese warring kingdoms. In his dorm after hours, they roleplayed at Killers, a talking-based group game popular in China at the time. He played computer games too, mostly the shoot-’em-up Counter Strike, in which he liked best to hide in tower windows and wait for the others to come out into the open below, before picking them off one by one. There was nothing more satisfying than a clean Player Kill.

One of the few things I would fault with the writing is the occasional use of punning humour, as in: “There may be no tigers in Hainan, but there are always Tiger Mothers.” When interacting with non-native speakers there’s a tendency to use cheesy puns, and such lines instantly transport me back to the ESL classroom (though like a shell-shocked survivor of the trenches, I may be overly sensitive on this point).

Any book about China’s younger generations carries the promise of a glimpse into the future. Given that the half dozen individuals featured in Wish Lanterns are overall beneficiaries of the status quo, and that they’re talking to a foreign writer, it’s not surprising that none of them are calling for revolution. The take away from the book is that the generation tends to be socially liberal, politically conservative, and above all pragmatic. They see political change as coming slowly, “by evolution, not revolution.” Describing Dahai’s thoughts on the matter, Ash writes:

China would only truly transform when the old guard died and his generation, the post-80s, took over. But it would be a slow change. By the end of 2012 he was thoroughly disabused of the belief that he could better his society. Instead he focused on improving his own life.

Wish Lanterns is beautifully written, funny, and informative – one of the best books I’ve read on modern China.

Wish Lanterns is published by Picador Books. It is also available from Amazon.co.uk, Amazon.com, and other retailers.

You can read Alec Ash’s interview with Bookish.Asia here.