In the lead-up to the fortieth anniversary of Mao Zedong’s death (September 9, 1976), controversy raged in an unlikely place. Among the Chinese community in Australia there was a divisive argument about two Mao tribute concerts planned for Sydney and Melbourne. Australia-based Chinese cartoonist Badiucao expressed his disgust:

Badiucao is one of China’s leading political cartoonists. Perhaps it’s in his blood. In the late 1950s, his filmmaker grandfather was arrested during an anti-rightist campaign and sent to Qinghai province to be re-educated through labor. He died soon after from starvation. If Badiucao were living in China, he’d no doubt be getting his own dose of reeducation in prison. Fearing this, he was determined to move overseas. Since 2011 he has been drawing his incendiary political cartoons from the safety of Australia. He does so under the pen name Badiucao, which he came up with by choosing three random Chinese characters.

As well as the China Digital Times, Badiucao uses social media to spread his cartoons, though this is problematic. His accounts on Weibo – the Chinese version of Twitter – have been shut down dozens of times. He is active on Twitter, but China’s Great Firewall means he can reach only those Chinese Internet users with proxy servers.

The ebook begins with a Q and A, in which Badiucao gives some personal background and his artistic influences. He cites German artist Käthe Kollwitz (1867–1945) and Spanish painter Francisco Goya (1746–1828), and credits Ai Weiwei’s example for encouraging him to be brave with his own artwork. Badiucao has a distinctive style of red, black, and white coloring using a simple woodblock-print style and playing with iconic Communist images from Mao-era propaganda. Watching Big Brother goes through Badiucao’s cartoons explaining the background to each picture (and even providing links to relevant news stories).

The explanations accompanying the pictures are especially useful when a cartoon involves Internet slang and/or Chinese wordplay. Internet censorship has given rise to the creative use of homonyms and near-homonyms, i.e. words that sound the same or similar but have different meanings. “Miao” (Chinese for “cat”) can stand in for “Mao.” “River crab” (héxiè) sounds like “harmony” (héxié), taken from former president Hu Jintao’s platitudes about building a “harmonious society,” and is employed as a euphemism for censorship. Both “harmony” and “river crab” can also be used as verbs, as in “Badiucao’s latest Weibo account just got river-crabbed.”

The following cartoon features several of these wordplays:

Badiucao reinterprets a photo that went viral in November 2014 of Xi Jinping sharing his meal with a soldier in a restaurant. Chinese netizens have mocked the picture, which is reminiscent of almost identical images of previous leaders including Hu Jintao and Jiang Zemin. In Badiucao’s drawing, leaders past are shown handing down items from their own legacies to their successors: Mao Zedong hands Deng Xiaoping his “little red book”; Deng Xiaoping hands Jiang Zemin a tank; Jiang Zemin gives Hu Jintao a watch, which is a play on his guiding socio-political theory of the “three represents”; and Hu hands Xi a river crab, a euphemism for the “harmonization” of society, or censorship. Xi is shown handing a baozi (steamed bun) to his as yet unnamed successor. Netizens gave Xi the nickname Steamed Bun Xi after his highly publicized visit to a baozi shop in Beijing.

Other times, the explanations are for internet memes. With the drawing below of Second World War leaders at the Cairo Conference, we might be familiar with the famous photograph upon which it is based and think it’s a simple substitution of Mao Zedong for Chiang Kai-shek. But there’s more to it and we benefit from the backstory.

At that time, Mao Zedong was chairman of the Communist Party of China and played no part in the Cairo Conference. Yet posters for a movie about the historical meeting showed Mao front and center, and inspired mockery among Chinese netizens when the movie was released in August 2015. Badiucao reimagined the Cairo Conference meeting in 1943 between Chiang, Roosevelt, and Churchill, with an added guest, Chairman Mao.

One of Badiucao’s most recent artworks is the cover for the dark comedic novel Party Members, written by Arthur Meursault and published by Camphor Press. 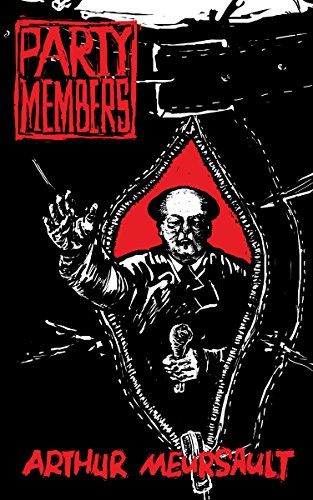 The artwork in Watching Big Brother is striking, funny, moving – a testament to Badiucao’s raw genius – and, with an informative accompanying text, finally made accessible for non-Chinese readers.

Watching Big Brother: Political Cartoons by Badiucao can be downloaded from the China Digital Times website on a donation basis. All proceeds from sales of the book go to supporting Badiucao’s work.