The Widow, the Priest and the Octopus Hunter: Discovering a Lost Way of Life on a Secluded Japanese Island • Amy Chavez

Home/Reviews/The Widow, the Priest and the Octopus Hunter: Discovering a Lost Way of Life on a Secluded Japanese Island • Amy Chavez
Previous Next

The Widow, the Priest and the Octopus Hunter: Discovering a Lost Way of Life on a Secluded Japanese Island • Amy Chavez

It would take a cold heart not to fall in love with this book from its very opening pages, where in evocative yet never overcooked prose veteran Japan writer Amy Chavez describes the daily rhythms of island life in the coming and going of fishing boats and ferries as seen and heard from her seaside house. This introductory “A Day on the Port” is the best passage of writing I’ve read in a long time. (I was going to quote from it but it seems a shame to cut it up – you can read the whole section, pgs. 11-18, on Amazon using the “Look Inside” function.)

Amy Chavez first moved to Japan in 1993 to take up a university teaching position in Okayama, a city on the Seto Inland Sea halfway between Hiroshima and Osaka. After four years of city life, she felt the lure of the countryside, “a yearning for something more soul-enriching.” Chavez went looking for a new home offering flavors of yesteryear, somewhere she could encounter superstitions, festivals and folklore, and be closer to nature. She found all that on the tiny island of Shiraishi (White Rock) and remains there today, a quarter of a century later. As Chavez says, “the briny borders have preserved the island like a jar of pickles,” with traditions surviving decades longer than on the mainland, and some particular to the island, such as an adoption system called fude no oya (“ink brush parent”). 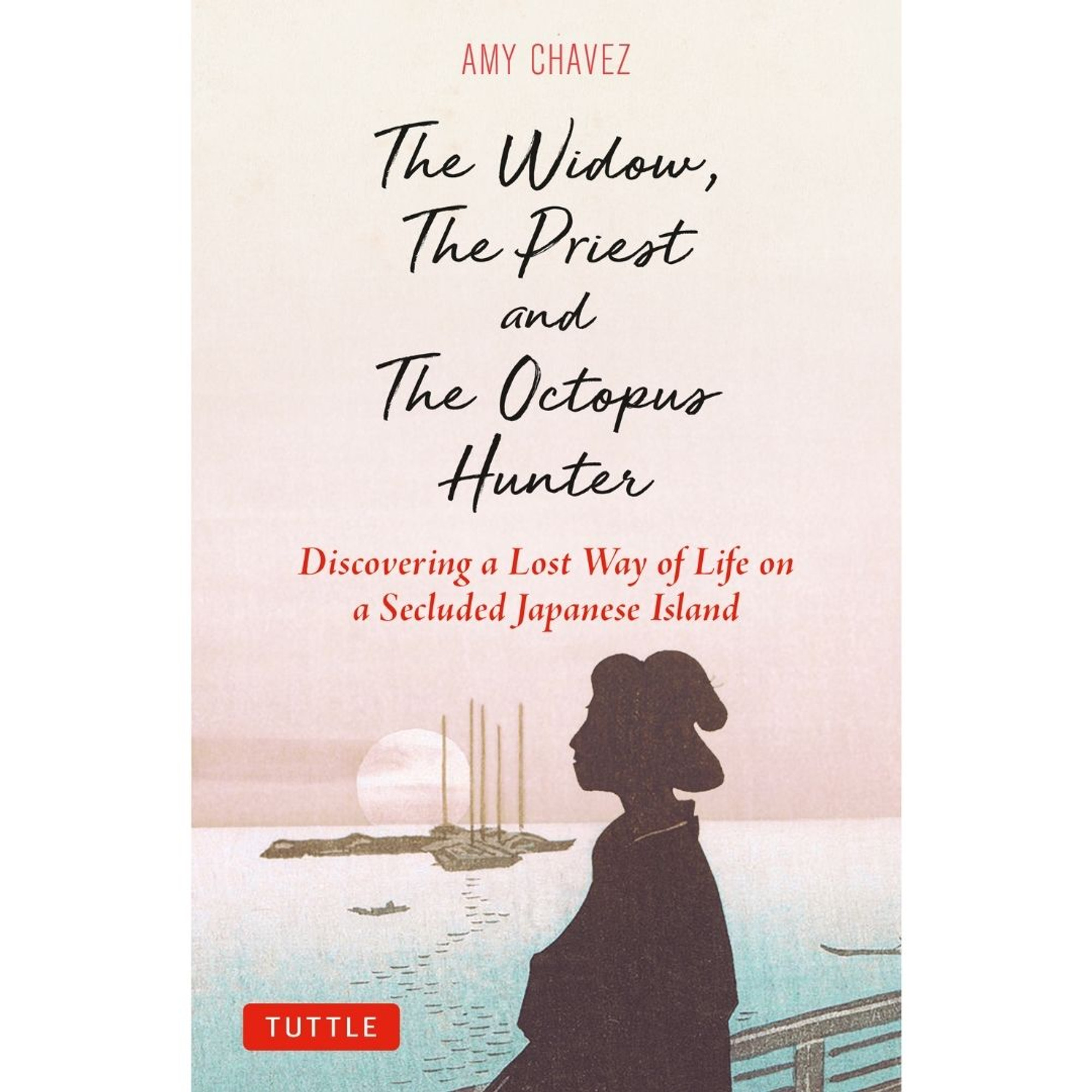 When Chavez took up residence on the island, she rented a house from an elderly woman named Eiko, who was leaving the island and also leaving many of her cherished possessions. There was some mystery about those and her life, and Eiko’s story provides a thread running through the book.

What I didn’t know at the time was that Eiko, the grandmother, born in the ninth year of the Taisho period (1920), had married one year before the end of World War II. Her husband had been immediately drafted into the Imperial Japanese Army and the newly married couple were separated. He would soon die in battle, never to meet the child she was carrying. When the baby was born, Eiko was already a widow. Her son – my landlord – grew up with no father, no siblings, and almost no extended family, while most of his peers came from large families of eight to ten children.

The Widow, the Priest and the Octopus Hunter shines a light on a largely forgotten group of people who suffered from the Second World War, the war widows like Eiko.

When Chavez took over Eiko’s home, it was “brimming with the old lady’s possessions,” and in common with the feelings of many islanders, these family mementos were not especially treasured. In fact, islanders are rather casual about old belongings. They throw things out, or they burn them:

Twice a year the local temple holds a Buddhist goma fire ceremony, believed to have a spiritual cleansing effect, where people can burn items too sentimental to throw out with the dirty garbage. Photos, letters and talismans will be blessed by a yamabushi mountain ascetic priest before they are turned to smoke and journey up to the gods for safekeeping. In the elaborate fire ritual, the yamabushi dons dear skins, blows through conch shells, and releases arrows into the sky from hand bows. As a stack of pine logs is torched, the yamabushi slashes a sword in the air to evoke the deity Fudomyo-o, remover of obstacles and destroyer of evil, and the locals chant the Heart Sutra synchronized to the passing of a large juzu prayer-bead rope around the perimeter of the fire. In the finale, possessions are eagerly flung into the flames like ingredients into a soup pot. Only the most precious family items are ever kept back by the heirs, and if the family members have been estranged from the island, perhaps not even those.

Eiko’s story was a catalyst for Amy’s book as an act of preservation and remembrance (and to satisfy her own curiosity). During the course of a year she interviewed dozens of islanders and transcribed the recorded conversations. And then she translated them into English. This was a “painstaking process” which required the help of a research student, a Japanese language teacher, and a Buddhist priest to make sense of the “accents, customs and antiquated vernacular of locals who have been living for almost a century in relative isolation.”

The result is over thirty fascinating, intimate portraits. We get to meet the Pufferfish Widow, the Octopus Hunter, the Tombstone Maker’s Wife, a Buddhist Priest, the Cargo Ship Captain, the Stonecutter, and many others. These names are not just memorable chapter titles, or a clever way to distinguish similar surnames, but how the islanders are known by each other. These informal names also reveal the important industries of the island: fishing, quarrying, shipping, and tourism – or, more accurately, formerly important industries, as they have all been on the wane for many decades. Today the main source of income is pensions.

Shiraishi’s population was about two thousand in the 1960s, but had fallen to only 430 at the time of writing (2021), with “most of them elderly, some well into their nineties.” The island’s elementary school had closed three years before. There was still a junior high school but when the author spoke to both of the students (yes, the school had only two students) it was weeks away from closing. The island’s rapidly-aging community is about to fall off a demographic cliff. There are some stories of island returnees and of newcomers, which give glimmers of hope, but the general trend is obvious; the community will all but disappear within a generation.

At least Chavez’s book will immortalize the lives and lost ways of the island. To be of lasting value, however, a book needs to be read. For this to happen, it needs to be very good. The Widow, the Priest and the Octopus Hunter is much more than good. It’s an instant classic, an easy entry in my top-ten Japan books.

Though a small island has inherent exotic color and romance, and a long-term foreign resident makes the perfect guide, how far do these elements carry a book? Writing a full-length work about a small island and its inhabitants is actually a daunting challenge. Have you ever visited a village, a small town or island, happily explored it and then felt your feet get itchy on the third morning? And then there’s the people – the island community basically resembles a retirement home: think fuzzy recollections;  meandering memories, stories with little relevance for outsiders; photo albums, snapshot after snapshot of people, a blur of names and relationships. There is an considerable skill and sweat in making all of this into a highly readable work. It has been done by the skillful selection of anecdotes, the interweaving of interesting background details, bringing out the individual characters of the people, and immersing the reader in the island by taking us along the back roads and into people’s homes so that we feel that we are there. Also, the framing of a year – the cyclical passing of seasons and rituals – works well, and the measured use of some threads, such as Eiko’s story and also the author’s time on Shiraishi. So, superb writing craft and done with a light hand you don’t see the nuts and bolts of the construction.

And perhaps the book is so effecting because of a pervading sense of melancholy. A poignancy hangs over the chapters; all those lives upended by the war, and the island’s population slowly dying. I like happy endings but there’s no denying that sad ones are more memorable.

When these children off the early twentieth century pass away, they will not be replaced by sons, daughters or grandchildren because they have all moved to the cities. Only the boulders and mountains on this island will be witness to what once was.

The sadness is tempered by the author’s upbeat nature, the active lives and gratitude of the old people, our happiness at the opportunity to meet the diverse cast of individuals, and the book itself – the act of making it and the finished product itself are tributes to the island and islanders.

The Widow, the Priest and the Octopus Hunter is published by Tuttle. It comes with illustrations: photographs old and new, and line drawings.

From her island home, Amy Chavez has written extensively about Japan (including a column for the Japan Times for twenty-three years). She founded and runs the excellent Books on Asia website, which features reviews, interviews, and podcasts on books related to East Asia. I recommend signing up for their newsletter.