The United States vs. China: The Quest for Global Economic is a sober, sensible warning about the potential dangers of various possible futures that lie ahead as China matches the United States in economic might and overtakes it in the coming decades. The China challenge will be different from the ones presented by the USSR and Japan last century. They weren’t really in the same league as the United States, but China is. In fact, it’s the first real challenge to American supremacy.

We’ve all heard of the Thucydides trap, the high likelihood of war when an emerging power is set to replace an existing great power. Bergsten introduces us to an economic version of this called the “Kindleberger trap,” named after economic historian Charles P. Kindleberger, who argued that the Great Depression of the 1930s resulted from a failure of global economic leadership. Great Britain, was no longer able to act as world economic guardian, and the United States, the new economic power, was unwilling to take the helm. Countries around the world erected trade barriers, investment flows dried up, and, as a result, the economic collapse of Wall Street spread. A replay of this is possible if the United States and China descend into an economic Cold War and attempt an aggressive decoupling. 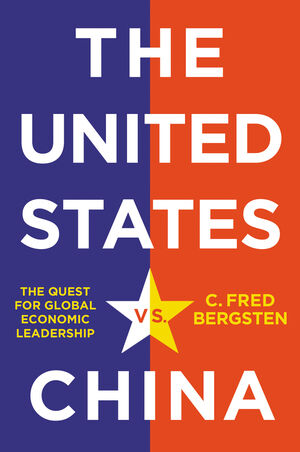 The United States vs. China is, though a timely book warning of imminent danger and prescribing immediate action, one that is based on a long-term perspective. The author has been a participant and observer of the entire rise of China, from the darkest days of Mao’s Cultural Revolution through to the present. (He was, for example, economic deputy to Dr. Henry Kissinger at the National Security Council from 1969 to 71.)

This is an academic work yet accessible to the non-specialist reader. The prose is clear and the contents proceed in a logical fashion, with sub-headings, questions, and highlighted text to make things more readable. There is useful background and concise summaries of relevant important works on the subject.

The most thorough analysis to date of China’s intentions concludes that “Beijing’s ultimate objective is to displace the United States order globally in order to emerge as the world’s dominant state by 2049” (Doshi 2021). According to reasonable economic projections, China will by then account for about one-third of the world economy, and its per capita income would be about double the global average (Yang 2020).

Bergsten often starts chapters and sections with answers to basic questions, for example, what economic power is, how it’s measured, and whether this power actually translates into a capacity to lead and a willingness to do so. In terms of this last question, the willingness to be a global leader, Bergman says that the incumbent power, the United States, “may be losing its will, while the rising power does not yet have full capacity (and may not want to assert true leadership either).” China will probably:

try to maintain for some time its current strategy of seeking to obtain the best of both worlds from the present international economic order: preserving the open system but exploiting its weaknesses and gaps to pursue its own national strategies when that seems advantageous.

China has had some regional leadership success such as with the Asian Infrastructure Investment Bank (AIIB) but mixed results with the more ambitious Belt and Road Initiative (BRI). Beijing favors bilateral over multilateral relationships, i.e. “partnerships” to “alliances,” and “probably prefers to keep international institutions relatively weak to protect its own sovereignty.”

The United States and China may be on their way to a two-power world, what Bergsten calls a G0 scenario, that is, no clear global leader. This will produce a global “vetocracy,” (a dysfunctional system of governance whereby a power no single entity can acquire enough power to make decisions and take effective charge), with adverse effects for the global economy.

Various other possible scenarios are explored. Containment of China, however, is not an option the author says; it is too large and powerful, and few countries would join the United States in any such attempt. He asserts this approach would be counterproductive, hurting the US economy and alienating allies.

Bergsten proposes what he calls “conditional competitive cooperation” between the two powers, making for a G-2 World, i.e. co-leadership of the world. “Competition would characterize the day-to-day interactions between the two economies. Conditionality would require both countries to implement the leadership commitments they make to each other and to fulfill their international obligations more broadly.”

Despite the title, The United States vs China, the book takes a global approach, looking at middle-power countries and various alliance blocks. He mentions Japan as a positive example of:

a rising power that was not involved in writing the rules of the post-war system but achieved many of its national goals by working within the rules and norms of that system (Lipscy 2020). Japan symbolized how the system in turn could accommodate a newcomer and elevate its influence and status, although its periodic struggles to achieve those results are also instructive.

The book tries to take an objective look at the US-China situation. Although the constructive engagement argument that China would become politically freer as it becomes richer is now much (and deservedly) derided, Bergsten highlights some successes. He writes that China helped stabilize the world economy during the Asian financial crisis of 1997 and the global financial crisis a decade later, has helped keep inflation low, and driven world growth. He’s not pro-China as such; he also mentions the harm China’s rise has caused and its unethical practices, making it clear that China’s dominance would not be a good turn of history, unlike that of Britain’s and then the US’s in the twentieth century, which he characterizes as “benign hegemonies.” Some readers might bristle but if we apply that all-purpose “Compared to what?” measure then it’s a fair assessment.

Moreover, major economies, including China, should continue defending the current system, preventing its gradual demise, or, worst-case scenario, collapse. This will buy time for moving to a system where there is “conditional competitive cooperation” between the United States and China.

In this G2 World, China would be granted more say in running international institutions such as the IMF but also be held to greater account. Personally I remain skeptical regarding the PRC changing its wicked ways; this is a country where every company is under the ultimate control of the Chinese Communist Party.

As a Taiwan resident married to the country, I’m not happy when I see suggestions like Bergsten’s regarding separating “economic (and global commons) issues from the more contentious security and values topics.” A policy of treating Taiwan, the South China Sea, Hong Kong, Falun Gong, the Uighurs, and so on, as irritants to profitable trade, well, it moves us from the realms of economics to morality.

I’m a China hawk, so rather than hear Bergsten’s sobering assessment and his prescriptions based on the hope Beijing can follow the rule of law, I’d much prefer a rousing call to economic arms and a strategy to free the Chinese people from their long PRC bondage. Alas, as unsatisfying as acceptance of China’s power status is, and the resultant need for interaction, this is the cold hard truth. Taiwan provides a case in point; despite being in China’s target sights, it still has important economic links with it. Even in my household, complete decoupling has not proved possible. I’ve tried to put my foot down when my Taiwanese wife covets ChiCom appliances, and had some success, but lost the battle on boycotting Xiaomi’s excellent robot vacuum cleaners.

No matter where you sit on the China-engagement spectrum, you will find Bergsten’s intelligent arguments of merit and practical use; whether you find yourself nodding in agreement and glad to be armed with such persuasive points, or furrowing your brow while attempting to formulate sound rebuttals, you’ll come away with a more informed and nuanced view of options for the China–U.S. economic relationship.

The United States vs China is published by Polity Press, which is putting out some of the best books on contemporary China, the likes of Elizabeth C. Economy’s The World According to China, David Shambaugh’s China’s Leaders: From Mao to Now, and Aaron L. Friedberg’s Getting China Wrong. Don’t be put off by the minimalist book covers.

The United States vs China is especially recommended for policy makers and journalists, and would be a great assigned university reading.