Aaron Friedberg would be justified in adopting an “I told you so,” attitude to the West’s belated waking up to its failed engagement project with China. In articles and books such as Contest for Supremacy (2011), the American political scientist has long warned about the China threat. However, in Getting China Wrong he does not take a triumphalist lap of honor.

Contrary to what some critics have claimed, engagement was not merely a fool’s errand, a careless and self-evident blunder with an obviously unachievable aim; nor was it simply the handiwork of greedy “globalists” in search of profits. Rather it was the product of a unique set of historical circumstances that prevailed at the end of the Cold War.

One of those circumstances was the euphoria at the end of the Cold War, when the juggernaut of democracy seemed unstoppable. After all, during what has been called the “third wave” of democratization, the number of democratic states had grown from thirty in 1973 to fifty-nine in 1990. Yes, China had bucked the trend in 1989 with Tiananmen and the crackdown that followed, but for the optimists even that setback gave signs for hope: student protesters had called for democracy, even built a “Goddess of Democracy” inspired by the Statue of Liberty. Surely it was just a matter of time before this young generation replaced the old hardliners.

In fact, the Tiananmen Square massacre, because of the threat it posed to budding business connections and potential (China always seems to be about potential rather than actual profits), “served to mobilize and solidify a powerful coalition of business groups that successfully fended off immediate threats to their interests and, in the process, helped to transform economic engagement into the central pillar of post-Cold War US China strategy.” 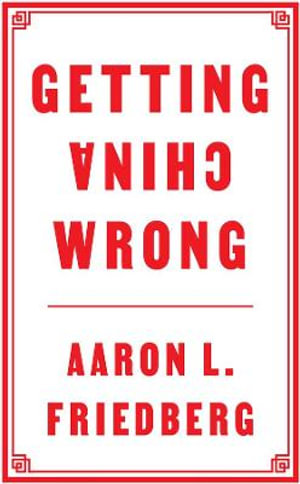 Economic engagement with China was supposed to have produced a liberal, market-oriented, status quo nation. Integrating China into the global economy was supposed to have weakened the state’s grip on the economy. A richer, freer China would produce a middle class who would demand political reform. This kind of optimism was at a peak with Beijing’s accession to the World Trade Organization (WTO) at the end of 2001. A decade later all these hopes were looking foolish.

Getting China Wrong explains the disconnect between the expectations and the reality. Friedberg says that engagement failed to achieve its objectives in large part because Western policy-makers “underestimated the resilience, resourcefulness, and ruthlessness of the CCP, misjudged the depths of its resolve to retain domestic political power, and failed to recognize the extent and seriousness of its revisionist international ambitions.”

Friedberg is good at stressing that China’s leaders were never onboard with the West’s hoped-for liberalizing effects of engagement. They saw The West’s engagement as an attempt to weaken and subvert China from within and to contain it from without. The CCP regime has, for decades, been single-minded and persistent in working to make sure these fears have not been realized. What’s different now is that China’s growing strength and self-confidence has translated into a more aggressive face.

Getting China Wrong examines American policy from the late 1980s through to the early 2000s in greatest detail, which covers the presidencies of George Bush senior and junior, with Bill Clinton’s in between. The greatest errors fell during the Clinton presidency but Friedberg is not partisan on attributing blame. There’s plenty of that for both sides of the political aisle.

Leaders in Congress and the White House were subject to intense lobbying efforts paid for by American business and Beijing. And it was not only Washington politicians who were targeted.

For decades, starting in the early 1970s, the CCP worked tirelessly to shape the perceptions and behavior of Western political, business, government, and intellectual elites. The methods employed varied widely, from flattery and financial contributions to bribery and blackmail, but the basic goals remained constant: to persuade those targeted that engagement was working.

The sales pitch worked so well not only because it was done on a huge scale, and involved self-interest for the target, but because it also fell on receptive ears. A new century was coming, globalization and IT were changing the world, and democracy was spreading. China was opening up just as American technology seemed unstoppable. Engagement with China would boost the country’s move to free-market economics. Greater choice in the economic realm – more personal freedom over where people worked, lived, traveled – would lead to demands for greater political freedom and choice.

President Clinton is a good example of the optimism of the time surrounding the new Information Revolution. Friedberg quotes Clinton on this: “In the new century, liberty will spread by cell phone and cable modem. … We know how much the Internet has changed America, and we are already an open society. Imagine how much it could change China.”

Like many, Clinton saw the Internet as unleashing irresistible forces of freedom, as in his famous dismissal about the CCP’s crackdown on the Internet. “Good luck! That’s sort of like trying to nail jello to the wall.”

As Friedman explains there was supposed to be another, more indirect way technology would drive political freedom: “economic growth would be increasingly reliant on innovation, which would depend in turn on the free exchange of ideas and information.”

Hindsight is, of course, 20/20, but the idea that the CCP would allow China to liberalize was mostly wishful thinking. Leninist regimes do not stand down unless they are forced to do so. The CCP’s leaders have made their own survival a priority; even incremental progress – an election here, an outspoken newspaper there, a reminder to follow the communist’s own manifesto – has been crushed.

Friedberg is good at stressing that China’s increasing authoritarianism is not due to Xi Jinping, who came to power in late 2012, steering a new authoritarian course. That might be comforting for politicians, academics, and others who got China wrong, but it doesn’t bear scrutiny. Xi Jinping is different in degree but not different in kind. “Contrary to the way in which he is sometimes portrayed in the West, however, Xi does not represent a break from the past.” The difference with Xi, is that he feels “emboldened to express those ends more openly and to pursue them more forcefully than his predecessors.”

And a lot of what Xi is expressing smells like unrepentant communism.

In 2017, Xi had one of his favorite slogans (also borrowed from Mao) inscribed in the CCP constitution: “Party, government, army, society, and education. East, West, South, North. The Party leads everything.”

It seems simplistic to the point of stupidity to say that the Chinese Communist Party are communists, yet this has to be said; they believe in communism, in the dictatorship of the state, or as Xi and Mao would say “The Party leads everything.” Many China watchers spend decades studying the trees and are blind to the forest being a communist one. The CCP were and remain communists. Not agrarian reformers, not nationalists, not pseudo capitalists, not consultative authoritarians.

The West is waking up to China, but there’s still a way to go: many Western observers still refuse to face the fact that the PRC wants to “displace the United States as the world’s predominant power,” and to spread its system of government.

Finding fault with past policies is, of course, easier than providing solutions for moving forward, so it’s fitting that this book about “getting China wrong” has a small but excellent section about “Getting China Right,” and this alone is worth the price of the book. Friedberg succinctly lays out various approaches and the dangers involved.

Friedberg is happy that democracies have begun to face up to the unpleasant reality of China, but he says they still lack a sufficient sense of urgency. Enough already with the patience and mild pressure. He advocates sustained pressure on the regime.

“Rather than increasing the risk of war, a firmer and steadier approach to dealing with China can actually help to reduce it.”

A soft Western approach may cause Beijing to underestimate the capabilities and backbone of the democracies and thus encourage a miscalculation that leads to war. Friedberg thinks concerns that a tougher approach against the PRC will empower CCP “hardliners” are “misplaced.” I agree and also with his assessment of the mythical CCP dove:

“The notion that there were doves nestling quietly in the Party’s ranks was always dubious, and there is certainly no evidence that any currently exist.”

Friedberg ends his book with a moving call to retain a component of the failed engagement experiment: the moral argument that China’s citizens are entitled to universal rights and freedoms. “That is still the case and democratic leaders should not shrink from saying so, lest they appear through their silence to have accepted the inevitability of perpetual CCP rule.”

Getting China Wrong is a concise, readable, and compelling look at the failure of United States’ engagement with China. Written with expert knowledge and experience, it never strays into hyperbole or partisanship, and stands out from comparable titles by managing to be immensely reasonable yet still packing an unequivocal punch. It is published by Polity Press.