Home/Reviews/At the Teahouse Café: Essays from the Middle Kingdom • Isham Cook
Previous Next

Isham Cook’s writing was recommended to me by Arthur Meursault. I’d previously chanced upon Cook’s website but been put off by the pervy content. When I say “pervy,” I don’t mean that Cook is the sort of chap you wouldn’t want pet-sitting your llama, or that his bedroom drawers are likely full of sixteen-century Hungarian spanking implements and Japanese sailor-style school uniforms. Rather, I mean perviness as in a preoccupation with sex and an unfiltered frankness when writing about it. “Not really my cup of tea,” I explained to Meursault, (himself the author of a book unfit for the eyes of minors and single women). “Yes, Isham likes his whores,” Meursault acknowledged, but suggested I have another look. I browsed through the various book titles – Massage and the Writing, Lust & Philosophy, The Exact Unknown – and settled on his most recent and least sexual one, At the Teahouse Café.

Funny, assumption-challenging, and above all unique, the book consists of fifteen essays on a variety of subjects, including China’s Great Firewall (a really funny sendup of official propaganda), the concept of face, Chinese universities, poor service in stores, Beijing’s canals, and yellow fever. There is no real overarching theme; as Cook explains in the must-read preface, the essays simply reflect his interests. 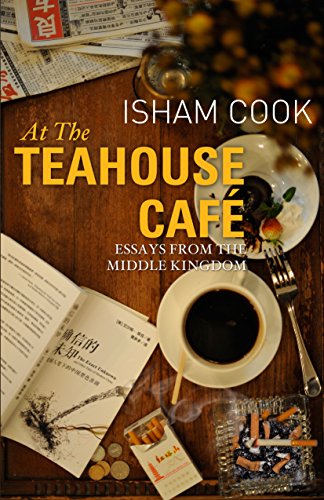 Isham Cook steels his wonderfully iconoclastic opinions with a deep knowledge gained from two decades in Beijing and a mountain of reading. His riffs on China are eloquent and erudite – not the boorish ranting of a drunken barfly – yet no less cutting. In a chapter comparing the noise encountered on public transport in China and Japan he writes: “Riding Japanese trains is like being in a Zen garden on wheels.”

Here he is musing on the annoying and overloud music often encountered in coffee shops:

Like “elevator music” in the West, all music is Muzak to the Chinese. They don’t listen to it so much as expect it provide an atmosphere on demand. Putting the same few tracks or a single CD on repeat mode for the entire day is as logical to them as lining a room with wallpaper of the same pattern.

Sometimes the assertions are thoughtful analysis, other times tongue-in-cheek:

My theory as to why so many Chinese shout at each other even in quiet places is that it’s an ingrained response from centuries of life on the farm, when people communicated by yelling across fields, and they remain forever stuck in yelling mode.

As you would expect from a collection of essays on varied subjects, your favorites will depend on your interests. Being musically inept (and resenting anyone who isn’t) I didn’t enjoy the passages on music so much, especially when he talked at length about harpsichords. In addition, the tone is not entirely consistent throughout the whole book. The chapter on Beijing’s neglected canals and moats is, for example, drier than the others, though fascinating. He writes: “The ghostly network has disappeared into the woodwork to such a degree as to render it invisible, not amenable to conscious awareness in the city’s psyche, despite being right out in the open.”

Cook laments the wasted potential and imagines a more liveable city with these waterways resurrected. It should be a real possibility in a country with such a proud hydraulic past and a technocratic leadership of engineers.

My favorite chapter is the devastating The ventriloquist’s dilemma: Asexual Anglo travelogues of China. Despite disagreeing with the validity and fairness of some of Cook’s assertions, I found the essay irresistible. It will change the way I read and write about China. In the chapter, Cook puts the following four recent China non-fiction books under the microscope: John Pomfret’s Chinese Lessons, Rob Gifford’s China Road, Liam D’Arcy-Brown’s The Emperor’s River, and Peter Hessler’s Country Driving.

According to Cook, foreign writers frame their books in a predictable, patronising way, and says that their authorial voice is contradictory. Referring to D’Arcy-Brown’s book:

But what I find more salient is the mysterious co-existence of disparate voices proceeding from the author. On the one hand, the laid-back backpacker in dirty jeans, the white guy with the easy rapport among the locals, roughing it and hanging out with truck drivers and waitresses. On the other, the grand statements in the style of erstwhile imperialist men of letters—the “oracular murmur” (Adam Mars-Jones on Henry James)—summing up exotic lands for our edification. Perhaps we are so used to the voice of authority that we take it for granted, are scarcely conscious of its strangeness whenever the informal writer assumes it. Or is it the other way around? Is it a backpacker mouthing truisms about China in a weighty voice or a literary poseur trying on the outfit of a backpacker?

Cook has a problem with foreign authors’ allergic reactions to romantic possibilities with Chinese women, in particular with prostitutes.

The traveler who sleeps on filthy coal barges and plays cat-and-mouse with the Chinese police is aghast at the chance of sex with a Chinese woman. …

But to bring up the possibility, to tease and titillate the reader, to create suspense on the precipice of moral degradation, by all means! Here we see the limits, the bourgeois constraints imposed on the contemporary travelogue, the red line repeatedly skirted but never crossed in the polite world of Anglo publishing.

In defense of the four authors, I have to say that Cook treats their being married as a minor detail, and it’s worth noting that Cook is – unlike the authors – writing under an alias. Regardless of how much you agree with his arguments, however, I think this chapter alone is worth the price of the book.

You can purchase At the Teahouse Café and Cook’s other books from Amazon.com and other online retailers. The Kindle book is a bargain at just $3.99.

You can read his blog at ishamcook.com.

Arthur Meursault’s review of The Exact Unknown is also worth reading.