Tales of Ming Courtesans is a moving story about the strength of female friendships. The novel, set in the tumultuous last years of the Ming dynasty, follows the fortunes of three girls, all victims of the flesh trade, who, through their beauty and talents, become celebrated courtesans. They form a sworn sisterhood and remain loyal to each other despite trials of injustice, mistreatment, betrayal, not to mention the cataclysmic events of the time.

The three main characters were all real-life women: Liu Rushi (1618–1664) was a poet, Chen Yuanyuan (1624–1681) became the concubine of Wu Sangui (the general who infamously allowed the invading Manchu army through the Great Wall at the Shanhai Pass), and Li Xiangjun (1624–1654) was a famous singer, whose doomed romance with a young scholar was immortalized in the play The Peach Blossom Fan. 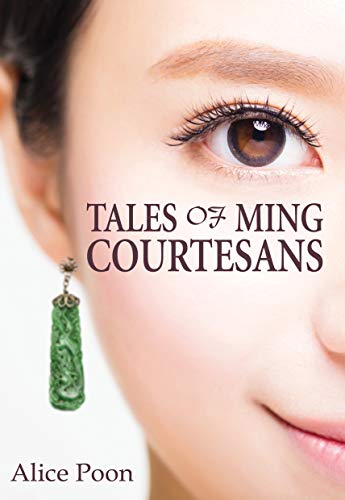 The novel is beautifully researched. The late Ming was a high point of Chinese literature, and with these women moving in literati circles (perhaps, more importantly, being the subject of male desire), there’s a lot of good written material to draw on. (Be sure to check the excellent bibliography at the end of the book if you wish to do some follow-up reading.)

Tales of Ming Courtesans highlights a surprising intersection of two seemingly different worlds; those of literary scholars and women entertainers. As explained in the novel:

The Qinhuai pleasure district in Nanjing was renowned for the exquisitely beautiful and talented courtesans and performers who resided in brightly furnished brothels that hugged the willow-fringed southern shore of the Qinhuai Canal. After the Manchu invasion, though, the place was reduced to only a shadow of its former glamorous self; just a sorry relic for the nostalgic few. But in those more prosperous times, it was like a pilgrimage site attracting young scholars and officials from all over the country.

The Nanjing Examination Court, where scholars took civil service examinations, was located on the opposite shore.

Tales gives a wonderfully detailed description (you could build a film set from it) of the courtesans’ home: the Villa of Alluring Fragrance. It’s an ornate two-storey timber building with a “signature jasmine-scented verandah and billowing lilac silk curtains,” overlooking a canal teeming with “flower boats” and its back to the bustling Bank-note Vault Street. The courtesans perform on “a raised stage, brightly lit by ceiling-suspended lanterns, where nightly performances of opera singing or pipa playing take place. Each padded seat is separated from the next by a wide armrest which serves as a side table to hold drinks and plates of sweetmeats.”

Descriptions of clothes are another strength of the novel, and they help you picture scenes in your imagination: “Both young men were neatly attired in loose-fitting pale green cotton robes with wide sleeves, their hair covered in a dark blue square cloth cap with two long bands streaming down the back, the most stylish clothing for scholars.”

As well as drawing on historical fact and folklore, Poon has added some characters and episodes of her own creation. One of these is Jingjing, Rushi’s daughter. It’s 1664, the year of Rushi’s death and Jingling is reading her mother’s memoir. Combined with various oral accounts, the memoir allows Jingling to piece together the stories of the three “sisters.” It’s a clever framing device, holding the book together and allowing for multiple points of view and for useful repetition of main points. It also adds an extra narrative arc as Jingjing gradually uncovers a secret about herself.

Tales of Ming Courtesans is an enjoyable read despite the suffering endured by the women. The main characters are likeable and appealing, in personality and fortitude; they are not beaten down by their humiliations and heartaches. Their desire for social justice sometimes seems overly modern, but admittedly, these women were hardly typical. Moreover, they were socialising with young disgruntled literati who were openly questioning the status quo – particularly corruption and the influence of court eunuchs – as their personal fortunes fell and the dynasty was in its death throes.

There are occasional instances in the novel when words or phrases seem anachronistic – a mention of women “hooking up” with men of their choice jumped out at me, as did use of “a mobster” and “goons,” words I think of as twentieth-century Americanisms.

Overall, however, the prose is good, fitting for the time and context. The lush style and emotional language suits romance, and it’s important to remember these are poetic-minded teenage girls experiencing love and heartbreak, and life and death matters, and growing up all too soon. (In Yuanyuan’s words, “I was nearly fourteen, a marriageable age.”)

Here’s Rushi on seeing love-interest Zilong for the first time and the pair looking at each other:

When he was seated his deer-like gaze swept around and then nestled on me. Almost paralyzed by his fervid stare, I couldn’t but lock eyes on him. … Entrancement and inquisitive wonder chased each other across his face as he kept up his impassioned gaze.

There’s someone slightly odd about the wording, the way certain words are paired, though often difficult to put your finger on. The wording is different from what a monolingual writer, born and raised exclusively in English would write, and I believe this enhances the novel. It gives the prose a subtle otherworldly feel, an exotic touch that makes it all the more believable that we’re hearing something from a distant time and place. Credit goes to editor Graham Earnshaw for smoothing out the writing.

Poon’s descriptions are often beautiful. This scene-setting passage for a boat cruise ends on a memorably lovely five-word sentence.

Feathery clouds wheeled across the pale blue sky. The sun’s warm rays gilded everything they touched, dappling the crystal clear water with silvery patches. The murmur of waves lapping against the sides of the boat was in chorus with the sonorous rustle of willows. The landscape strummed in harmony.

The darker aspects of the women’s stories are handled tastefully, happening off page. The book is never sleazy, voyeuristic, or exploitative; instead, it is a feel-good read with positive themes about human resilience and friendship.

Alice Poon is a Hong Kong-Canadian historical novelist who has written about women in the Ming-Qing transition period before. Her debut novel The Green Phoenix: A Novel of Empress Xiaozhuang, the Woman Who Re-made Asia (2017), also published by Earnshaw Books, was very good (reviewed on Bookish Asia here) and I think Tales is even better.

Poon is doing readers a great service in giving voice to some of the female figures in Chinese history; more specifically, giving them top billing rather than cameo roles. Chinese history has been written with a heavy male bias, so female accomplishments and life stories have been ignored. There are countless fascinating subjects awaiting a willing pen.

Tales of Ming Courtesans is published by Earnshaw Books.