Home/Uncategorised/Taiwan: A Travel Guide for Vegans • Jesse Duffield
Previous Next

Duffield does a good job of explaining the differences between Buddhist vegetarianism and Western veganism, and of dispelling some common myths. These include “There are a lot of vegetarians in Taiwan,” and that “Fake meat is vegan.” The fake meat – worth trying even by the carnivorous just to experience the ingenuity behind creating such tasty substitutes – sometimes contains dairy products, egg, and even meat products. He recommends avoiding all fake meat products, with the one exception being at the Loving Hut chain, which manufactures its own fake meat from raw ingredients.

Taiwan: A Travel Guide for Vegans aims to be a complete guide rather than just an eating guide supplement, but has limited accommodation listings; the assumption is that visitors will find places online through sites such as Booking.com. It’s also important to note that the book does not cover the entire island. There’s information on Taipei and northern Taiwan, and also for Taroko Gorge on the East Coast. On the western side, the southernmost entry is for Lion Head Mountain in Hsinchu County, an area of temples in the mountains included by the author “because it offers a unique combination of Buddhism, hiking and a stunning sunrise (on the right day).” 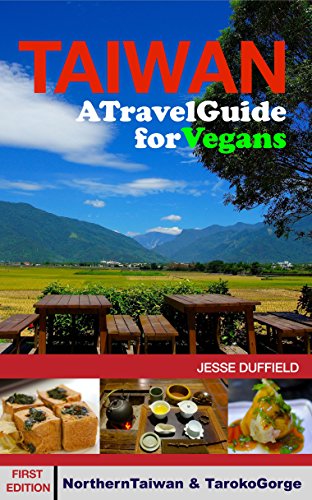 The guide was originally published in 2015 and has been periodically updated since then. It’s obvious from the detail and the practical usefulness of the descriptions that the author has – as he states early on – visited everywhere he mentions in the guide. Duffield, a teacher from New Zealand, is a long-term resident in Taiwan, where he teaches science at an international school.

I agree with Duffield’s assertion that Taiwan is “one of Asia’s most under-rated tourist destinations.” It has great scenery, culture, and people who are “exceptionally friendly and welcoming to visitors.” The country is also good value: “infrastructure almost comparable to Japan and prices almost comparable to Thailand.” However, the author is not a blinkered cheerleader, and he doesn’t pull punches about the ugliness of the urban areas, or in dismissing restaurants not worth eating at. We get straightforward warnings such as: “There are no good dining options in….” or “none worth trying unless very desperate.” In these cases he gives suggestions on places to eat or stock up on food en route. This kind of straight talk in regular guidebooks is rare these days. But it’s just what is needed in sifting the wheat from the chaff.

The guide is self-published, which shows in the personality of the author coming through, reminiscent of the early days of guidebooks. Alas, it also shows in the sloppy punctuation – missing commas and semi-colons, and hyphens where there should be en-dashes – though this doesn’t detract from the utility of the book.

Duffield’s ethical eating philosophy extends to other areas of tourism. There’s an emphasis on hiking and cycling, museums, historical sites, and temples. Like me, he prefers Bao’an Temple to the better known Longshan Temple, “whose famous courtyard is used more by photographers than worshipers.” The author reminds visitors to Bao’an to be respectful: “It’s acceptable for tourists to wander around the busy goings-on of the temple, but I recommend being very discrete with cameras, and not photographing individuals at worship.”

Duffield’s favourite short hike in Taiwan is the Siaocukeng Ancient Footpath Trail, which goes from the old mining town of Jiufen over a mountain to Houtong, “offering spectacular views over the bay and Keelung Mountain.”

Not surprisingly, what sets the guidebook apart are the listings for vegan restaurants, which he says “are magnitudes of ten better in the quality and originality of their cuisine than vegetarian restaurants.” After reading the guide, I’m keen to try a few of them, such as Fruitful Food, an upmarket buffet in Mingyao Department Store (a short walk from the Taipei MRT Zhongxiao Dunhua Station, Exit 3). For all the recommended restaurants, he gives a good general description of the food on offer, and all the details you might need: price range, hours, location and how to get there, whether bookings are advisable, and any relevant internet links.

Hats off to Jesse Duffield for producing this guidebook. When you’re travelling overseas and struggling with the language and unfamiliar eateries and dishes, it’s hard enough being an omnivore. But being on a restricted diet like a vegan one must be really tricky. The guidebook is sure to be of great benefit for vegan and vegetarian visitors.

Taiwan: A Travel Guide for Vegans is available from Amazon.com.

To learn more about the book visit the author’s website.