Where I live, a bicycle is a necessity of life. It’s the only sensible way to get around a city like Amsterdam with its winding canals and ditto streets. Everyone here rides: men in three-piece suits, women in stiletto heels and kids on their way to school.

Bikes are the main characters in The Stolen Bicycleby Wu Ming-Yi, a novel set in Taiwan. And this is only befitting for a country once called The Bicycle Kingdom.

If you live in Japan, Europe, or North America and own a bicycle, there is a good chance that a number of its parts were manufactured in Taiwan. From ultra-light carbon fibre frames and the latest electric, smart and green technologies to various bike components ranging from tires, pedals, chains, saddles, grips, and even bike carriers for vehicles, Taiwan’s bicycle industry remains a global leader despite recent declines in exports and sales.

The narrator Ch’eng calls himself a bike fanatic. That is to say, a collector of antique bikes, bike parts and store signs of defunct bicycle repair shops. His quest is to find his father’s Lucky bike, lost since the day he disappeared. Along the way, Ch’eng meets other cycle fanatics, a photojournalist with his own missing father and stolen bike, a woman who makes butterfly collages and another named Shizuko who ties the threads together. 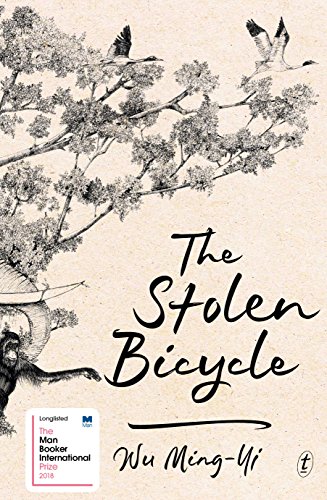 Bike Notes connect these many narrative strands the way tire rims give purpose to their many spokes. There are seven Notes with illustrations of vintage bikes. Take the 1915 BSA Territorial Modele de Luxe 1A with its rifle mounted on the down tube. Bike Notes IV gives us the history of war bikes.

Armoured units used bicycles in combat as early as 1898, when the Americans suppressed riots in Havana. The military use of bicycles may go back even earlier – for instance, to Italian bicycle messengers in 1875. Bicycles in Warlists some of the advantages of war bicycles. For starters, bicycles were as fast and agile as cavalry, but didn’t have to eat, drink, shit, piss or sleep like a horse. A bicycle also won’t kick or bite. Even more important, a bicycle unit doesn’t consume gasoline like a motorcycle unit. And riding a bike is much quieter than riding a horse or driving a vehicle.

During WWII, the Imperial Japanese Army deployed the Silverwheel Squad to conquer Singapore. Sixty thousand soldiers and ten thousands bicycles attacked from the border between Thailand and Malaysia. The soldiers deployed whatever came to hand. They found vines to quench their thirst. They learned to make war from the boughs of a banyan tree. They captured Indian mahouts to harness the strength of their elephants. The jungle became an instrument of war.

When the war was over, those elephants were taken away from their jungle home. They became the spoils of the victor. In one of the most beautiful passages in The Stolen Bicycle, the elephants are marched out of the jungle headed for distant destinations. Not all of them survive.

When the matriarch collapsed, the other elephants all stopped in their tracks and gathered round. They stroked each other’s backs with their trunks, humming with incredible tenderness.

[…] The magnified multi-layered echo sounded to the soldiers both mournful and warm. They sensed the elephants’ sorrow, and sorrowed for themselves. They remembered lovers and loved ones in distant lands, dead comrades, severed arms that had once gripped penises and guns, and eyeballs that would never grow back.

These elephants can smell a human dream by holding their trunk over a sleeping person and breathing in. In one such dream, battle erupts around a banyan tree. A soldier falls. The worms and the dung beetles and the crows close in.

Unlike in the waking world, these scavengers swallowed even the bones, leaving only the eyeballs of their prey. As a result, in the clearing around the tree were dozens, no, hundreds eyeballs, all glowing like pearls in the scrub, each reflecting the jungle as a curved world.

WWII was a pan-Asian war. The Philippines, Singapore, Malaysia and Burma. Taiwanese fight for the Japanese Imperial Army. Indians war on behalf of the British.

The Stolen Bicycle is a pan-Asian story. It’s told in the Taiwanese of the author’s childhood and the traditional Chinese characters of its original publication. It includes Tsou, an indigenous dialect, Japanese and English to display all the variegated layers of Taiwan’s rich geology.

In the world I grew up in, the word a person used for ‘bicycle’ told you a lot about them. Jiten-sha (‘self-turn vehicle’) indicated a person received a Japanese education. Thih-bé (‘iron horse’) meant he was a native speaker of Taiwanese, as did Khóng-bȋng-tshia (‘Kung-ming vehicle’), named for an ancient Chinese inventor, Tan-ch’e (‘solo vehicle’), chico-t’a-ch’e (‘foot-pedalled vehicle’) or tsu-hsing-ch’e (‘auto-mobile vehicle’) told you they were from the south of China.

Taiwan is Wu Ming-Yi’s home and he is its preeminent author. When The Stolen Bicycle was long-listed for the Man Booker International Prize in 2018, it was the first such work by a Taiwanese author. Taiwan was understandably proud of its native son and his translator Darryl Sterk.

Then the government of China intervened. China wanted the Man Booker committee to change Wu’s country of origin from Taiwan to Taiwan, China. It has long been a tenet of Chinese policy to insist that there is only one China of which Taiwan is an integral part. The Man Booker committee eventually kowtowed to China, following a trend already set by airlines.

In the ensuing international backlash, Wu Ming-Yi stated merely that he had made his wishes known to the Man Booker committee. In the end, the Man Booker honored Wu’s request. Today, he is identified as an author from the sovereign state of Taiwan.

The Stolen Bicycle is a tale of Taiwan. It is about war and bicycles, butterflies and elephants, banyan trees and Lucky bike stores. It is a tale that could only be set in the Bicycle Kingdom. And only a Taiwanese author, steeped in his country’s rich past, could have written it.

Karen Kao is a published novelist, short story writer, essayist and poet. Her debut novel, The Dancing Girl and the Turtle (Linen Press 2017), is the first of four interlocking novels to be set in Shanghai. For more information on Karen and her work, please visit her website at www.inkstonepress.com.