It’s been sad watching the decline in popularity of the travelogue over the last quarter century. I remain hopeful, however, that there can be a renaissance of the genre, because a good travel book is an inherently wonderful blend of fun and fact. This satisfying mix of escapist pleasure and digestible knowledge has no need for a reinvention, but a new twist of style or subject is always welcome. Such is the promise of Osaka! Osaka!, an account of an elderly American resident trying to bond with his mixed-raced teenage son by dragging him to the city’s museums and historical sites. 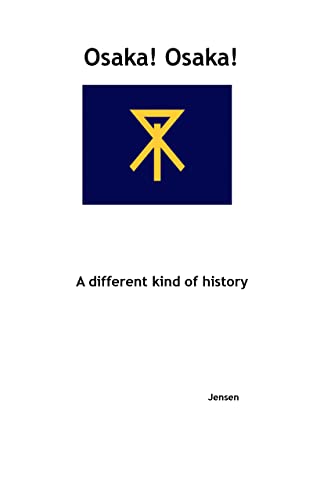 Jensen went to Japan in the late 1990s to teach English. He’s honest enough to admit that despite some interest in the country, he was mainly there for the Yen. His plan was to work, save money, and leave. But as often happens with life’s plans, cupid intervened…

I met my wife. It was a blessing. A few years later we decided to marry. I am a lucky guy, but being an immigrant, an older father, and the father of bi-racial children can be challenging, which is why I drag Joji on these excursions. I keep thinking, despite evidence to the contrary, that he will enjoy them, that we will grow closer, perhaps, deepen our mutual understanding.

Jensen is a good-natured but rambling host as he shows us around Osaka. There’s some humor in cultural misunderstandings and differences, but thankfully, this is not overdone. An advantage of an account written by a long-term resident rather than a by a visitor is that we don’t get the tiresome “weird Japan” schtick.

Some of the humor comes from the son-father dynamic. For example, they have contrasting ideas about traveling between points A and B. As Jensen is struggling to find his destination, he comments: “Being a little lost is normally okay with me. Sometimes I kind of like it. Today I wouldn’t mind it, if my 15-year-old son Joji weren’t here. Being lost, even a little, is not okay with him.”

Jensen’s approach to history is similar to his learn-as-you-go navigation. He often starts with saying he knows little about a historical building, area, or event, but then sets out to remedy that, which makes for an easy introduction for readers unfamiliar with Japan. They can learn along the way with the author. Jensen’s breezy informal retelling of history will not be to everyone’s taste but he does draw on and cite some academic works.

Jensen started the book project as a “bonding exercise” but also from the desire to learn more about the city and to tell people “what an enthralling place Osaka is. No one outside Japan knows. No one knows anything about Osaka.”

Indeed, it is little known, and little written about. For instance, I’d not previously read of the World Exposition held there in 1970, yet Jensen makes an interesting point that it was as much a showcase for Japan’s post-war renaissance as the 1964 Tokyo Olympics. “The Expo may have been as important as the Olympics because the focus was on technology, not athletic prowess, so Japan was better able to show the world how far it had come in twenty-five years.”

Jensen does a good job of describing the major role Osaka played in Meiji-era Japan. The cotton industry was especially important. In fact, the textile industry was Japan’s largest manufacturing industry, and its major source of export earnings. It was an industry based on the labor of girls from the impoverished countryside.

By 1900, according to one estimate, about 800,000 women were employed by the textile industries. By and large, however, they were not women, but underage and impoverished rural girls, who were seen as “docile” and “obedient” and thus could be paid little and controlled easily. Upon recruitment, a fee was given to the girls’ parents, which enabled many struggling families to pay the rent and have some money for living expenses. In practice, this was more like a loan from the factory-owners that the daughters paid off by having their wages tapped. The result was very similar to indentured labor.

Although Jensen has a fondness for Osaka, he’s not blind to the reality that it’s “largely treeless … enormous, gray, concrete, and full of people.” Still, the positive qualities of the people and culture make it more livable than you would think. “I will say, if you are going to live in the middle of 20 million people, make sure they are Japanese.”

Being well organized has some pedigree in the city. Jensen relates how, centuries before, society was divided into various classes:

The members of each group had a specific set of rights and were required to perform certain duties, and this extended all the way down. Beggars were no exception. From the 17th century, licensed members of the beggar fraternity had an official right to seek alms in specific neighborhoods. This city was organized!

For a modern expression of organization, it’s hard to go past the rail system; as Jensen says, Japan has “the cleanest stations and the most efficient trains.”

He draws on an interesting paper by Hashimoto Takehiko, who claims that Japan’s renowned punctuality is a recently acquired characteristic, not part of the national character from ancient times.

According to Hashimoto, however, it is the result of the introduction of clocks during the Meiji era. Prior to 1873, he says, daily life was framed by the variable hour system of “seasonal time.” In contrast to a system that divided the day into fixed hours of equal length, seasonal timedivided every 24-hour period into day and night, and then divided these into equal time units called koku. The long days of summer were 6 koku as were the short days of winter, and each was marked by the ringing of the official gong.

I really don’t know what to make of it. That the society, the whole thing, changed into an efficient, punctual, time conscious place since around my grandmother’s birth, is just mind-blowing. The Osaka to Kobe line was Japan’s second railway and began operations in 1874, one year after they started running on clocks.

Osaka! Osaka! suffers from the balance of Japan versus Osaka history, leaning too much to the former, which is a pity. There are already plenty of books on the history of Japan, not so Osaka. Additionally, the writing is often not of a professional standard, the content unstructured, and the tone too folksy for a general history (though the book is fairly labeled as “a different kind of history”). It’s a self-published work and it shows. The writing would be fine for a blog, but for a book it needs tightening. There are numerous asides such as:

The Spanish empire was at its zenith when Toyotomi built his castle. The potato had arrived in Europe but was not yet fried in the French manner. That wouldn’t happen for a while, and it may have been in Belgium, although that’s a dispute I’d rather not stick my nose into.

The author includes some dialogues with his students in which he corrects their English. I don’t know whether this is pet peeve territory for me and if other readers find it funny or not. Anyway, here’s an example when he is asking his students about an iconic canal in Osaka:

“When was Dotonbori dug?”

“Lord help me,” I think fighting off a chuckle. “Yuka,” I say looking to a girl sitting in the middle of the room. Her hair is also dyed a light brown and is pulled into a ponytail. She sinks as if shot.

“When was Dotonbori dug? “I don’t know too.”

Despite the book’s flaws, I’m glad I read it. I’m reminded of what that great man of letters Samuel Johnson said about travel in his Journey to the Western Islands of Scotland (1775): “All travel has its advantages. If the passenger visits better countries, he may learn to improve his own, and if fortune carries him to worse, he may learn to enjoy it.”

Not an exact match for history-travel books, but the point remains: even with flawed ones, you can come away with inspiration for travel or writing. Jansen’s wanderings have given me a better idea about Osaka, a list of places I would like to visit, and some follow-up reading to do. It’s also made me think about the use of video for Camphor Press titles, because Osaka! Osaka! has a rather innovative feature. Links are provided to YouTube videos of places mentioned in the book, with labeled Google map images and photos. Perhaps it’s an obvious idea to supplement books with video content, yet seldom done.

Osaka! Osaka!: A different kind of history is available as both paperback and ebook on Amazon.