Home/Uncategorised/Massage and the Writer • Isham Cook
Previous Next

Whether you’ll enjoy Isham’s Massage and the Writer depends on how open-minded you are. If you’re conservative – either of the traditional “thou shall not covet thy neighbour” type, or the more malignant PC liberal type that views any intimate encounters between white men and foreigners as some kind of residual colonialist blight – then you’ll hate this book. Luckily for Isham, I have no problem with frank observations about sex. The sexual market, after all, overrides all other markets and is the silent background charger to so many other social interactions. Handled well, commentary about sex can be some of the most all-encompassing social commentary possible. 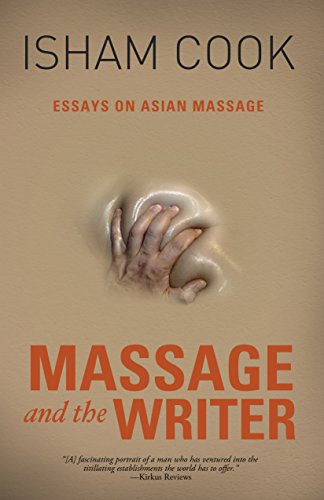 Like his At The Teahouse Cafe (reviewed previously on Bookish Asia), Massage and the Writer is another collection of non-fictional essays that originally started life on Isham’s blog. Whereas At The Teahouse Cafe was generally focused on China – albeit with a few diversions into Isham’s more primary interests of sex and massage – this time the focus is 100% on the author’s experiences with massage in a variety of countries and situations. The essays take us on a journey through China, America, Japan, Southeast Asia and beyond. Isham is very “open borders” on where he’ll stick his dick, and it’s not confined to women either; there’s a memorable paragraph about sucking off a young man in a Turkish sauna and a whole chapter on men massaging men.

Smaller than the Cagaloglu, the Cesme exudes the same dusky primeval atmosphere. Several bathers lounge about inside. I pan myself with hot water from a marble sink in one of the chambers adjoining the hot area, each with its own mini cupola. A strapping young man enters the chamber and washes himself opposite me. Bathing etiquette requires us to tie a towel over our groin, but he lets an erection pop out. He walks up to grab a bottle of shampoo behind me. My mouth snaps onto his cock. A pair of older men poke their heads into the chamber to watch. The guy wants to dry-fuck me. I’m not into that and he leaves, whereupon the older dudes enter and sit against the wall just inside the chamber. They gesture at me to move over to where the young guy was sitting. I don’t understand what they’re getting at. They play with themselves under their towel and encourage me to do the same. Oh, I see, they want me to jerk off directly facing the entrance so I am visible to those passing outside the chamber to lure them inside for group action, or something like that. The young guy reappears, only to disappear again when he sees the old guys there. They too get up to leave and I’m left alone to make sense of the mysterious goings-on.

If that type of paragraph is off-putting to you as a reader, then you might as well stop now. For those that appreciate good writing though, there’s plenty to enjoy within this book.

In At The Teahouse Cafe, Isham used a number of devices to use as a lens in which to view Chinese society. A badly-made Black Forest Gateau exemplified the chabuduo nature of anything manufactured in the Middle Kingdom; the forgotten canals of Beijing a symptom of China’s headstrong rush into thoughtless modernity at the expense of its heritage. In Massage and the Writer we have a complete change of direction. Here Isham takes just one theme – massage – and uses it to view a number of different cultures. The author believes that massage is one of the truest windows onto a nation’s soul. We learn about the constant threat of litigation and false rape threats when attending a massage school in the US, the open-planned massage rooms of Myanmar where nobody is ever alone; and how Islam in Malaysia results in massage services being “outsourced” to non-Malays. China, though, remains Isham’s main focus of interest, and he reminds us that the sex industry is an integral part of the foundations of the Chinese economy. Anyone who is more than a casual visitor to the country would do well to bear this in mind.

Handjob masseuses in the bigger cities earn anywhere from 2,500-10,000 yuan a month, depending on the number of daily customers; intercourse can double or triple that. It is a lot more than what the rest of the service industry earns, which is rarely over 500 yuan a month for putting in the same twelve to fourteen-hour workday. This includes the many service workers employed by the bathhouses as cooks, attendants, servers, masseurs, maids and teenage girls doing nonsexual and foot massage. Like their sisters in sex work, reflexology masseuses and restaurant waitresses hail from the countryside, but unlike them they choose to remain “pure” and use their virginity value to marry up into a better household or attract a husband who can buy or build his own house. Yet visit any Chinese village, and chances are the newly constructed cement-and-tile houses you see were made with money sent home by the sex worker of the family.

For this reason, I found the whole book fascinating, enlightening and insightful. Sex is an important part of most cultures, whether we wish it to be or not. With this particular topic though, it really depends on the reader’s own leanings whether they will enjoy it or not. One man’s five-star review will be an expat magazine’s one-star review – and for the exact same reasons. Isham may have called his other book The Exact Unknown, but the reason why you won’t see Massage and the Writer reviewed in, say, TimeOut Beijing is a very “exact known”: fear.

Isham is a university professor by trade, and his books reveal the very best of what a good university professor should be. Before the mind-narrowing curse of political correctness took complete control of Western campuses, it was the responsibility of a good professor to broaden his students’ minds with challenging, if sometimes uncomfortable, reading material. This book is a great example of such material. Certain writers on expat and literary magazines and blogs would do well to step out of their self-imposed “safe space” and see what Isham has to say.