Lust & Philosophy is Isham Cook’s first novel and radically different from his other books. Isham’s previously published works were anthologies of either short stories or critical essays, but this time he has attempted to create a full-length semi-autobiographical novel with academic references so deep you’ll need an excavator to get to the bottom of them.

This is a bizarre novel, and your mileage will vary depending on your own personality. The plot is a meandering stream of consciousness that begins with Isham’s attempts to track down an attractive but elusive woman he spots intermittently around the Haidian district of Beijing. I’ve lived in the same area of Beijing and I had a lot of fun walking down Memory Lane with Isham’s descriptions of cafes and bars that I also knew well in the early 2000s. If you’ve ever been a student or teacher in Beijing’s university district then you will enjoy the references to places like Sculpting in Time Cafe and the Korean Wudaokao area. After a few relatively sane chapters describing Isham’s ploys to arrange a meeting between himself and the attractive stranger, the story soon spirals off into a history of Isham’s childhood and relationships whilst simultaneously detouring into lengthy observations on philosophy and literature.

It’s not an easy book to read. It’s a stream of consciousness rather than a real plot. How well read you are will also determine your enjoyment of the novel. As an example, here is a fairly typical chapter opener for one of the more prosaic sections:

The French poststructuralist Jean Baudrillard was fond of demystifying society’s sacred cows by showing that they are actually a parody of the real thing (though the parody is no less “real” than the real thing). For instance, why go to Disneyland for some silly entertainment when you can enjoy much more of the same in all of America itself, the real Disneyland! Similarly, however grim the reality of prison life, is its internal organization any different or all that much worse than the constraints and pressures of normal working life, the real prison? What is a mental institution but an exaggerated instance of the psychological distress and lunacy operative in the institution of the family, and what is a brothel but a funhouse mirror of tawdry domestic sex life? The spiritual refreshment people get from going to church seems almost respectable compared to the imposing power of the Church of the Mass Media to mobilise the masses in myriad daily consumption rituals and fanatical worship of things like cosmetics and spectator sports.

These philosophical detours can be fun if you are familiar with the wide range of topics that are covered. And there is a broad range of topics indeed. In just one chapter we are taken on a description of the Indian city of Varanasi; travel habits of the Japanese; public nudity; the career of Julie Andrews and the paradoxes of museums.

There are more than a few parallels between Lust & Philosophy and Hermann Hesse’s Steppenwolf. Isham even gives us a little literary clue – his company name that he uses to self-publish his works is called Magic Theatre Books: a sly wink to Hesse. According to the biography presented within Lust & Philosophy (I have no idea whether the childhood tales Isham narrates about himself are real or not), Isham goes through a period of wandering and homelessness just like the protagonist in Steppenwolf, and like Steppenwolf this novel transforms into an almost-mystical overview of one man’s life that travels back and forth between time and space. Once you understand what Isham is trying to achieve here, the plot makes a lot more sense, but the average reader will most likely be at a loss as to what the hell Isham is writing about. His audience, accordingly, will be extremely niche. People hardly read books anymore, let alone allegorical German ones.

Lust & Philosophy will most likely lose some readers due to its challenging nature. However, if you persevere with Isham, the rewards are there. The prose of Lust & Philosophy is some of his most beautiful work and there are a number of deep thoughts and threads to be found within. There are a few structural issues with the story’s narrative, but I believe the author is working on these for a revised second edition. Do persevere. If the reader is willing to invest some time into reading the book carefully, and doing some individual research on the philosophical detours that Isham takes, then they will take away something of value from Lust & Philosophy. 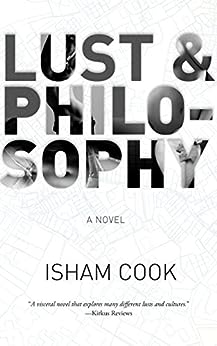