Of the handful of Taiwan adoption memoirs, the stand-out is Lucky Girl (2010) by journalist Mei-ling Hopgood.

Mei-ling was adopted in 1974 from Taitung, in the then relatively remote southeast of Taiwan, by an American couple from Michigan. She had a happy childhood, with two adopted boys from South Korea as playmates and adoring parents, and felt little desire to trace her roots. Mei-ling assumed she had escaped poverty and was grateful. 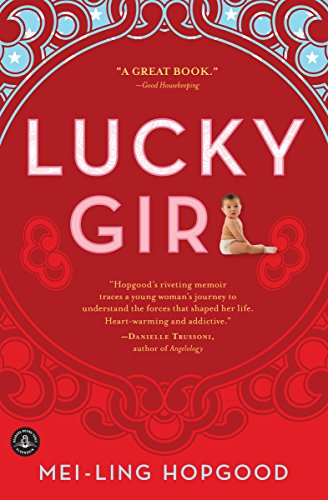 The go-between who had made the adoption happen was a young American nun from Detroit (a relative of a friend of the Hopgoods) called Sister Maureen Sinnott. Maureen had arrived in Taiwan in 1967, and after two years in Hsinchu spent studying Mandarin with fellow nuns and priests, served as a midwife in St. Mary’s Hospital in Taitung.

Sister Maureen was contacted by the Hopgoods asking about the possibility of adopting a child, and, indeed, there were parents – with five girls already and unable to afford another – looking to give away a newly born sixth girl.

The bureaucratic hurdles took about eight months, during which time Maureen took care of the baby. The girl was given the name Mei-ling (Maureen’s Chinese name). Maureen kept up occasional correspondence with the Hopgoods through the years, and spoke with Mei-ling when she was in her early twenties. Maureen asked if she should make enquiries about the family. Mei-ling didn’t sound enthusiastic, so the nun didn’t follow up. Later Mei-ling asked Maureen if she had written to the hospital. Maureen took the question as a request to write; she did so and learnt that both parents were from Kinmen, the father (59) a farmer and the mother (54) a housewife. She had eight siblings: six sisters and one adopted brother in Taiwan, and a sister given up for adoption to a couple in Switzerland. The family was delighted to be reconnected and asked Mei-ling to come for the approaching Chinese New Year (February, 1997). In fact, they were scarily keen, bombarding her with letters, e-mail, faxes, and phone calls, and the father in particular displaying little filter for social niceties.

The request that I buy my big brother clothing came in the second or third letter I ever received from my Chinese family. My introduction to this family, whom I had not heard from for twenty-three years, could be summarized like this: Hello Mei-Ling. We are your birth family. We missed you. Please come back to Taiwan. And, oh, yes, please buy clothing for your fat brother.

She was also asked to bring “fish oil” for her birth father’s digestive problems. Plebian and unfiltered but also generous, the father repeatedly offering to pay for Mei-ling’s airfare to Taiwan. She decided to go back at the end of March, 1997, paying her own way but accepting the ticket fare for Sister Maureen, who came along for moral support and translation help.

The entire family, whom the author refers to as the Wangs, were waiting for Mei-ling at the airport. It was an overwhelming reunion, a loving embrace by a large, noisy family. Despite the language barrier she quickly bonded with her sisters, though wasn’t quite sure what to make of her blustery father and docile mother.

Her time in Taiwan was a feeding frenzy; as a foodie she didn’t mind:

In Taiwan I fit right in. Eating is an event, a vital part of the culture. People greet each other, not by asking, “How are you?” but “Have you eaten?” When my family was not eating a meal, they were snacking. When they were not snacking they were talking about the next meal. We ate beef noodles, whole white fish, spare ribs, shallot pancakes, rice porridge, eel, frog, dim sum, and tofu. We had shrimp dumplings, pork dumplings, boiled dumplings, and pan-fried dumplings. We had sushi, sashimi, fish ball soup, and spring rolls that you wrap in lettuce and eat with your hands. We drank soy milk, bubble tea, orange juice, guava juice, and the occasional Taiwan Beer. We snacked on Chinese star fruits, kiwis, apples, and sweet bean cakes. We ate in kitchens, in dining and living rooms, at Japanese and Hong Kong restaurants, in cars, on benches, and during walks.

Mei-ling was impressed by how developed Taiwan was and also how middle-class her sisters were; they were all educated and working.

what struck me most was the realization that my siblings were not merely the children of a poor farming family, as I had believed. If I had an image of my birth family at all in my head, it had been in black and white and dismal. They would be gaunt, wearing ragged clothes and probably standing in some barren field with a shabby, straw-roofed hut at their backs, a stereotypical portrait of third-world poverty. I mean, that was why they had given me up for adoption, right?

The family had been poor but that was not the entire story. Between that 1997 reunion and the publication of Lucky Girl in 2010, Mei-ling would make several further trips back to Taiwan, gradually learning more about her family, quite a lot of it rather dark and related to her biological father’s determination to have sons. The father was one of nine sons, six of whom had died in childhood. In his mind, the survival of the family required a male heir to support and care for the parents in old age, to carry the family name and bloodline, and to worship the ancestral line.

In 1965 the mother gave birth to a boy. Unfortunately, he was sickly and had a cleft palate. The mother believed the father knocking a hole in a house wall had somehow injured the baby; according to this widely held superstition, house repairs during pregnancy can cause such deformities. The facial defect could have been remedied with surgery, if they’d been able to afford it. Instead, within a few days of his birth, the boy “died.” The grandmother and father, deciding the child would face a miserable life and thus was better off dead, laid the boy on a bed and withheld nourishment.

When the family moved from Kinmen to Taitung in 1972, they met an impoverished couple who, unable to feed their baby son, gave him to the Wangs. Misfortune struck again in the form of a severe fever, which left the boy mentally slow.

The quest for a worthy male heir continued but the mother kept producing girls: Mei-ling in 1973 and then another girl, who would also be adopted, this time by a couple in Switzerland. (Mei-ling describes how she tracked down her long-lost sister).

The book is full of further revelations, including the father’s bringing a mistress into the house: “Ma was upset and angry, but she didn’t stop her husband, nor did she leave. She still felt to blame for not being able to give Ba a boy. Meanwhile, he told his daughters that they were to call this woman auntie.”

This “auntie” fails to bear a son, and so the father brings a young boy born to another mistress into the family. Mei-ling says that: “While Ba’s behavior sickened me, Ma’s submissiveness, and ultimately her resignation, broke my heart.”

And Mei-ling wondered about the role of the grandmother:

I got the sense that this woman, who bore nine boys — three of whom survived — was the mastermind behind the family madness. She had the final say behind so many key decisions: when to give and not to give a child away, when to adopt one.

The question of keeping or giving away a girl was a mixture of harsh practicalities and superstition. The grandmother insisted the family keep the fourth daughter as she had a red mark on her head like a successful Chinese emperor: the girl would likely bring luck to the family. Similarly, the youngest girl, born three years after Mei-ling, was kept as she was born in the auspicious Year of the Dragon.

Mei-ling writes with great humor, passion, and fairness. Lucky Girl is by far the best Taiwan adoption story available in English; it’s fascinating material, satisfying in terms of narrative arc and the mysteries solved, and it’s very well written. Unlike most adoption memoirs, it’s a story which will appeal to all readers. And despite some darkness, it’s an uplifting book: Mei-ling’s reuniting with her family is not just the gaining of a new family and culture but a look at the possible life she might have had. She comes away from it more appreciative than ever of how lucky she was:

I realized that I had been given a unique gift, one that I thought was only given to make-believe characters in novels or movies, like George Bailey in It’s a Wonderful Life. I had been given the real-life privilege of seeing how my life could have been had I stayed in Taiwan, and that realization filled me with a confusing mix of remorse and relief.

The book is dedicated to her adoptive parents: “For Rollie and Chris”

Lucky Girl is published by Algonquin Books. It is also available from Amazon.com and various other retailers.