On Amazon (but not the book itself) this self-published teaching memoir has the subtitle: “I spent one year teaching ESL in Asia, so you don’t have to.” Similarly, a black-hearted reviewer might be tempted to write that he read the book so you don’t have to. However, my policy on Bookish Asia is to ask the question: What would Roger Moore do? To quote Sir Roger from his 2008 biography, My Name Is My Bond, on the subject of working with Grace Jones: “I’ve always said if you’ve nothing nice to say about someone, then you should say nothing. So I’ll say nothing about Grace Jones.”

In other words, I don’t write negative reviews. So, I’ll put aside my concerns about the boring and irrelevant passages such as the one describing the author’s pre-departure drive from Florida to his parents place in New Hampshire (not since especially uneventful stretches of the Precambrian Eon have there been comparable levels of dullness), and I’ll ignore the non-information in sentences such as this reference to 7-Eleven convenience stores: “Someone told me that Seven was owned by a Japanese company. I have not bothered to corroborate this.” 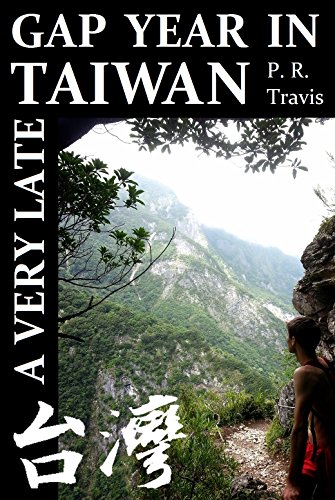 The “Very Late” in the title refers to Travis being thirty-one when he embarked on his “gap year.” Dropping out of his doctoral program to see the world and get laid, he accepted a job teaching English to children at Gloria English School, a chain of nearly twenty cram schools in Taoyuan County in northern Taiwan.

In scenes that will be all-too-familiar to many foreign teachers, Travis had a hard landing in Taiwan. His accommodation was substandard and the twenty hours a week of classes he’d been promised never materialised. After three months he was still working (and getting paid for) about twelve hours a week. Legally, a school needs to provide a minimum of fourteen hours so he was justifiably upset.

An introvert by nature, Travis found that he was not really suited to teaching, at least for Taiwanese cram schools, where the foreign teacher’s role is as much about entertainment as education. He also hated the horrible traffic, the filthy air, and his “urban wasteland” surroundings.

Travis doesn’t hold back on his opinions, and we get an unvarnished look at the life of a newbie teacher on the island. It’s funny at times, the kind of funny when you wince and think “Oh God, no!” There are also some good observations that a long-term resident like myself often misses. Describing the madness on the roads, he notes, “meter men on mopeds drive the wrong way from parked car to parked car,” which had me hitting my forehead for having become desensitised to this obvious irony of people breaking traffic rules while enforcing the traffic regulations.

And then there were the difficulties of daily life – getting around on buses and ordering food – that came from not being able to speak any Mandarin. To his credit, Travis enrolled in Mandarin classes; he certainly had the free time, if not the money. Despite being frugal and that rarest of creatures in Taiwan – the foreign teetotaller – he was struggling to make ends meet. He had arrived with too little money, and suggests any prospective teachers arrive with US$3000 to cover their initial expenses.

Travis’ lack of money makes for some excruciating episodes. One weekend he heads down to the city of Taichung for a date with a girl he’s met online. Rather than spend money on a hotel, he stays with a couchsurfing host. When the date goes nowhere, the author consoles himself that he wouldn’t have wanted a girlfriend who was a NT$300 (US$9.50) bus ride away. And then there is a shopping trip:

One day I went to Carrefour to look for a coffee mug, which I thought I had seen before for 1 USD (30 NTD). But when I found it, it turned out to 39NTD. Reducing my lifestyle to the barest necessities, besides granola and artisanal homemade yogurt, 39 NTD was more than I could afford for such niceties as a ceramic mug. I had been drinking out of jam jars for the last four months,…

I’ll give the author the benefit of the doubt and assume he has a very dry sense of humour and is knowingly sending himself up. How else to explain the “artisanal homemade yogurt”?

After about three months in Taiwan, Travis decided he would not see out a year. However, leaving took a little longer than planned as he’d acquired a local girlfriend. Even though her help and companionship made his stay in Taiwan much less of an ordeal, he still felt compelled to leave. Two months short of completing his year contract, he left the country, feeling “overwhelming joy.” He lived with his parents for about half a year recovering “through the zen of carpentry and writing.”

Travis decided to give Taiwan another try, this time hoping to find work in Taipei and preferably teaching adults. He spent two months looking for a job before throwing in the towel. His inability to find work in Taipei is a valuable warning for prospective teachers. The jobs you’re likely to land are in the least desirable places.

Although I can’t honestly give A Very Late Gap Year in Taiwan a blanket recommendation – the writing is too bloggish and the content too trivial – I still think it might be useful for prospective teachers and new arrivals. And the e-book (there’s no paperback edition) is only one dollar, so you can’t complain about the price.

A Very Late Gap Year in Taiwan is available from Amazon.