The ruins of Angkor are Southeast Asia’s most spectacular historical attraction. Still awe-inspiring despite the tourist hordes, they have inspired surprisingly few novels.

Angkor is the main setting for Samuel Ferrer’s The Last Gods of Indochine, a historical drama combining two storylines separated by six centuries; one story is set in 1294 during the last days of Khmer imperial glory and the other in 1921 during the period of French colonial rule. Though bridging these storylines obviously requires a bit of supernatural magic, the fantasy elements are generally restrained (think karma and reincarnation rather than time travel and sorcery) and there’s a nice historical grounding to the book. 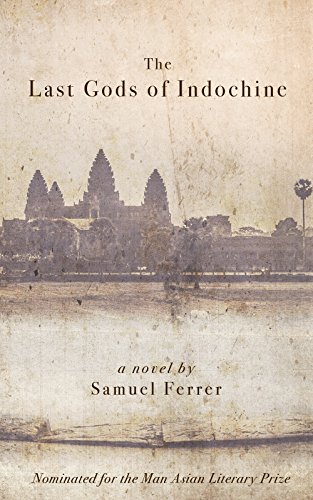 A prologue takes us to the jungles of Laos in 1861 where French explorer Henri Mouhot lies on his deathbed, delirious and wracked by malarial fevers. Mouhot is a real-life figure, the man credited with discovering Angkor Wat (or, more accurately, bringing its existence to the attention of the West).

Chapter One starts in 1921, sixty years after Mouhot’s death. His English granddaughter, Jacquie Mouhot (a fictional character), has been invited to Angkor Wat for the opening ceremony of a reconstruction project. After visiting her great aunt in Paris to learn more about her grandfather, she sets off alone to Cambodia by ocean liner to Singapore, then Saigon, and by steamer up the Mekong to Phnom Penh, and finally up the Tonle Sap to Seam Reap. The travel section takes its time and the pacing will be too slow for some readers, though I think it helps build suspense and gives a flavour of the era. Along the way we learn Jacquie is haunted by her hospital service as a volunteer in the First World War and suffers from terrible nightmares.

The chapters of The Last Gods of Indochine alternate between the characters Jacquie and Paaku, a Cambodian boy living at the end of the thirteenth century. The humble teenager discovers that he has powers and is perhaps destined for greatness. Unknowingly enmeshed in political intrigues, he becomes a central figure in a brewing sectarian struggle.

Soon after arriving in Angkor, Jacquie realises she has a special connection with Paaku. When shown some bas-reliefs, she is stunned to recognise a scene featuring the boy.

Jacquie refocused. Dear Lord, she knew this boy. She could see details of his face not carved into the stone. She knew him from a place well behind her own eyes, where his story has been slipped in as anonymously as a letter under the door. This was the boy from her dreams.

The ties between Jacquie and Paaku and the various plot strands of the separate stories are brought to a clever and satisfying resolution. The novel also has a most welcome section at the end noting which characters and events were fictional.

The author has an artist’s flair, the prose full of memorable phrasing. Here’s the first paragraph of Chapter One:

The glassy surface of the Seine River flowed with civility, sundering in two at the Ile de la Cité. Like a citadel, tall walls rose from the water to join with its residential part. A quaint reading park, tucked away at the base of the islet where the water parted, contained a small garden and a pair of trees. With their autumn blending, the willow and plane tree held each other like an elderly couple. Golden leaves butterflied between them.

The phrase “flowed with civility” is lovely, and original – I had never before read it applied to a river. It’s made even better being paired so well euphonically with the preceding “glassy surface of the Seine” and the following “sundering” (though, unfortunately, that last word’s suggestion of violence clashes with “civility”). “Like a citadel,” is also good, and “tall walls rose from” is a pleasing sequence of long vowels, but the sentence ends badly with “residential part.” It sounds awkward and echoes problematically in the next sentence with “park” and “parted.”

Now consider the last two sentences of the quoted passage. “With their autumn blending, the willow and plane tree held each other like an elderly couple,” is a beautiful description; however, it’s the second simile of the short passage, so the question arises: does adding a metaphor, admittedly an evocative one, “Golden leaves butterflied between them,” make it a shade too rich? A matter of taste I guess as to whether you like chocolate sauce on the cake.

Sailing to Saigon we get: “The noon sun gnawed upon the deck of The Majesty’s Lion.” That’s an inventive, effective use of “gnaw” and, once again, a usage I’d not seen before. I always enjoy coming across such wording and make a mental note to myself for possible use in the future.

On the same leg of the voyage we have this lovely sentence: “Wide-brimmed hat set low, white dress flapping in the wind, she was even starting to enjoy the pushing and pulling of the petulant sea, watching waves reach up and curl back their white knuckles to knead sunlight into water.” I love the imagery of “white knuckles” and “knead sunlight” and also the beat of the “w” sounds throughout the sentence. Brilliant but arguably a bit busy; is it a fraction overdone with the alliteration of “petulant”?

Here’s another lyrical passage describing Jacquie’s arrival on the outskirts of Seam Reap:

Clouds leached the color of dusk, and under a sky smeared as if by the hand of Monet, the steamer glided towards a buoy not far from a flooded forest’s edge. The chugging of pistons slowed to a tick and rainbows of grease appeared on the water behind the engine. The last and very short leg of the journey would soon come to an end; only the flooded forests separated them from the town of Siem Reap. The town spat out its anchor, smacking the water and pushing pastel light around in waves. The passengers waited. Tall gothic shadows elongated the deck. At the forest, bats flew upwards as if caught in a single funnel of wind.

Some great wording there – I especially like the “bats flew upwards as if caught in a single funnel of wind” – though perhaps in sum a little overcooked. I’d remove the “as if” simile in the first line of the quote, not just because we get one later, but because the sentence contradicts itself: if the colours have been leached, then the sky does not look like a Monet painting.

Personal preference of course, but this is the kind of poetic flourish you might pen at night with a hand loosened by a few bottles and which might require a toning down in the sober morning. Conversely, the author’s dialogue is sometimes rather pedestrian and would have benefited from more bottle.

But I’m being overly picky. Alas, all editors are thus cursed, reflexively drawn to possible changes when they should be enjoying the story. And it is a remarkable story well told. Samuel Ferrer’s ambitious debut novel is a stunning work of imagination and deserves to be better known.

The Last Gods of Indochine is published by Signal 8 Press and can be purchased on Amazon.