Home/Uncategorised/Japan and America: A Contrast • Carl Crow
Previous Next

Japan and America (1916) is a forceful warning about Japan’s diplomatic duplicity and its expansionist plans. Carl Crow (1883–1945), an American newspaperman based in Shanghai, was vehemently anti-Japan, but his strident tone seems justified given how subsequent events unfolded. He ends the book with a prophetic prediction:

In their hearts the Japanese believe themselves the superiors of the Americans in everything except wealth. They believe they are destined to play a very large part in the affairs of the world and to dominate the Pacific. The ambitions of the powerful military and naval clans, and what are believed to be the economic needs of the country alike call for a program of expansion and aggression which will eventually bring on a clash with the United States.

Despite the title, much of the book is about China, a country and people for which Crow had great affection. Unlike many fellow expats who pined for the good old dynastic days of the Manchus, Crow was sympathetic to the young, more nationalistic Republican China. Combining curiosity with common sense, he was an insightful observer of the times. He was outraged by Tokyo’s bullying treatment of China and frustrated by the success of the Japanese propaganda machine, which he had seen first-hand, having worked in Japan for eighteen months, 1913–1914, for the American-owned daily English language newspaper, the Japan Advertiser.

Just as today when traveling between Japan and China, a century ago travellers were struck by the contrast of cleanliness, order, and politeness in Japan with the chaos and dirt in China. Seeing as North Americans usually reached China by steamship via Japan, it was a comparison that was often made. Crow was adamant that these first impressions were misleading.

There is the surface Japan, the country which the tourist sees, and the country which slowly and reluctantly reveals itself to the disillusioned foreign resident. There is the Japan of the wistaria and smiling faces and beautiful scenery which enchants the tourist who does not stay long enough to learn that it is but the outer shell of a nation which, according to a well-known authority, “reeks with every species of moral filth, abomination, crime and corruption.” So are there two Japanese people, the polite obliging fellow traveler or casual acquaintance who will walk blocks out of his way to show a tourist some point of interest, and the officious and sometimes insolent official understrapper with whom the foreign resident often comes in touch. While Japan is the paradise of the tourist, it proves a very nerve-racking place for many foreign residents.

In so far as these different aspects of the country are natural, we can have no quarrel with them. Rarely does the tourist view of a place coincide with the view held by the foreign resident. In China the old resident is the one who expresses the highest regard for the Chinese, while the tourist who does not remain long enough to learn the solid worth of the people often goes away with the impression that all are dirty and nearly all dishonest.

In Japan and America, much of Crow’s ire is directed at Tokyo’s Twenty-One Demands. This was an infamous set of demands pushed upon the Chinese government in January 1915 (two months after Japanese forces – with minor British assistance – had captured the German enclave at Tsingtao, and in the process flagrantly violated Chinese territory). The demands, which were divided into five groups, would have placed much of China’s economy under Japanese control, and turned the nation into little more than a puppet state. The Chinese government and public balked at the conditions, and under pressure from Britain and the United States, Japan dropped the controversial fifth group of demands. On May 25 China and Japan signed a revised – though still onerous – agreement containing thirteen demands.

There is not in the entire record, from the time Japan entered the war until the conclusion of the new treaties with China, a single act of Japan which does her credit. But the most startling phase of the entire procedure was the attitude of the Japanese people. Knowing the extent of the demands on China, knowing the entire lack of provocation, and knowing the extent to which these acts violated Japan’s treaties and pledges, there was not one word of protest from a responsible Japanese quarter. Not one Japanese said a word in China’s behalf or raised a voice in defense of right against might. … It has not occurred to any Japanese that the entire attitude of the government is wrong and barbarous. On the other hand every Japanese, of high and low degree, has aided to the extent of his abilities the fulfilment of the government’s ambitions, has gloried in the humiliation of China and the exaction of unjust agreements which add to the prestige and power of Japan. Such an exhibition of national callousness, of the complete blindness of a people to the most elementary principles of right and justice, has not been seen in modem history. It reveals the Japanese character as nothing before has revealed it and shows that we must throw into the dustbin of discarded ideas all those roseate and imaginary conceptions of the Japanese people with which we have been fed by deluded observers.

Carl Crow had first arrived in Shanghai in 1911 to work for the newly founded China Press, the city’s first American-owned newspaper. As well as writing for and running newspapers, Crow opened the first advertising agency in Shanghai, and wrote numerous books, including The Travelers’ Handbook for China (an abridged version of the 1921 edition has recently been published by Camphor Press). His bestselling title, 400 Million Customers, came out in 1937, the same year that he left Shanghai for good, fleeing just as the attacking Japanese army was moving into the city. 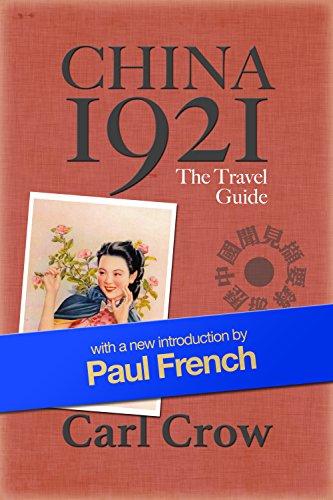 Japan and America: A Contrast is in the public domain. You can read it online or download an ebook file for free from archive.org.

Prolific China specialist Paul French has written extensively about Crow, including a biography published by the University of Hong Kong Press: Carl Crow―A Tough Old China Hand: The Life, Times, and Adventures of an American in Shanghai