Ed Lin’s Ghost Month (2014) incorporates several quintessential Taiwanese elements – religious superstitions, gangsters, night markets, and betel-nut girls – into a murder mystery. It’s set during the seventh month of the Chinese calendar (typically falling in August), a time when the dead roam the world of the living. The spirits – euphemistically referred to as “good brothers” and not “ghosts” – are placated with offerings of food and ghost money. Superstitious despite its modernity, Taiwan takes the month seriously; house sales fall, weddings are avoided, and grandparents warn against going swimming because of the water ghosts.

The protagonist of Ghost Month, Jing-nan, runs a food stand in a Taipei night market. It’s a good choice of fiction setting as night markets capture the flavors of the country: the neon color, noise, good-natured bustle, the local tolerance (enjoyment even) of crowds, the Taiwanese love of food and snacking, and their entrepreneurial spirit. One of the largest and better known night markets is the Shilin Night Market in the Taipei district of Shilin, and this is where 25-year-old Jing-nan has his food stand. 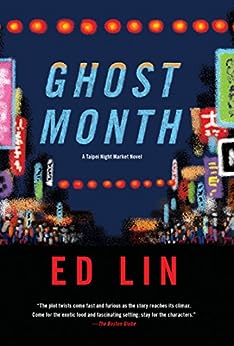 Though Ghost Month has tremendous local color and is a likeable and well-written enough story, it opens with what I think an impossible plot premise. Jing-nan sees a news story about a scantily clad betel-nut girl who has been shot dead, and he realises it’s his wife-to-be, Julia, whom he’s not seen for seven years. Yes, seven years. Jing-nan and Julia were high school sweethearts. On graduation they both headed to university in the United States, but on opposite coasts, Jing-nan to UCLA and Julia to NYU. They agreed not to contact each other until Jing-nan was ready to marry her, and he would ride in unannounced, a knight on a white horse to carry her off to be wed. While at UCLA Jing-nan learnt that his father had cancer, and so returned to Taiwan; compounding things, his mother was killed in a car accident on the way to the airport to pick him up. Jing-nan’s dying father asked him to take over the family food stall at the Shilin Night Market (and also inherits his grandfather’s old gambling debts). The years went by and he was never ready to marry Julia. And with her murder, it’s now too late. But he is determined to get to the bottom of the murder, despite being warned off by the CIA and gangster heat.

This seven-year black hole just seems so implausible: in the first place that the couple would agree to an excruciating open-ended arrangement and not contact one another through the years, and secondly that Jing-nan had not a single piece of news on Julia during that time from old classmates or mutual family acquaintances.

Jing-nan’s food stand consists of “five solid tables set up with sturdy chairs, all under a roof,” with the unlikely name of Unknown Pleasures after English post-punk band Joy Division’s 1979 debut album. Jing-nan is a big fan and there are numerous mentions of the band throughout the novel.

That’s a good description but the repeated music references seem more like a measure of the writer’s age than the character’s. This is not the only authorial projections going on here. It’s worth noting that the author’s Chinese name is “Jing-nan.” The character of Jing-nan is I think overly Americanized considering his brief stay there. In some ways he’s playing the role of tour guide for readers. Ghost Month is packed with digestible cultural, historical, and political information on Taiwan, which makes it a good choice for visitors and new arrivals to Taiwan. The explanations do inevitably slow the pace of the narrative, especially in the first half of the novel, but they will be of interest to many.

Ghost Month presents Taiwan as a more dangerous place than most foreign residents will recognise it as; entirely reasonable for a crime mystery and there really is a fair bit of crime behind the surface calm. Author Ed Lin incorporates his background reading (he recommends the excellent Heijin: Organized Crime, Business, and Politics by Ko-lin Chin in the glossary – it “will leave you slack-jawed” he says) into the story. For example, we learn about the jiaotous, who are pseudo-gangsters rather than real ones, local enforcers who run a few blocks, and whose “money comes from running the local temple – a major source of tax-free income – and bars and nightclubs.” Taiwan has larger, organised gangs (triads if you will) such as the Bamboo Union and the Four Seas. For the gang in Ghost Month, Lin has taken the precaution of an invented name, Black Sea.

From two-bit gangsters to food vendors to real estate developers, the author presents a whole cross-section of society. Helping out at his Unknown Pleasures stand are an aborigine and old mainlander, and a friend and fellow vendor is a Hakka. The novel emphasizes the ethnic divide between benshenren (native Taiwanese) and waishenren (Chinese who came over with the KMT); although very useful to newcomers imagining a monolithic Taiwanese population, the focus on this is slightly dated. The benshenren-waishenren dynamic perhaps reflects author Ed Lin’s family background; he’s a first generation American to a Taiwanese father and a mother from northern China (whose father was a KMT officer), with the homeland frozen in time to some extent, and the diaspora more polarised than the people back in the home country.

Lin came to Ghost Month having written a series of crime mysteries about a Chinese-American policeman set in New York’s Chinatown in the 1970s. Ghost Month is the start of his Taipei Night Market series. A sequel called Incensed (2016) is set during Mid-Autumn Festival (Moon Festival) with Jing-nan looking after a troubled teenage girl as a favor for his gangster uncle.

Ghost Month does not quite work for me as a Taiwan old-timer, it is one I still recommend for visitors to Taiwan. It is published by Soho Crime, and is available from Amazon.com and various other retailers.