When writing a travel book, you ideally want some kind of framework; whether it’s a river journey from source to mouth, the seasons of a year, retracing an explorer’s footsteps, or a pilgrimage to religious sites, you want something to hold the whole together. Formosa Moon has the brilliant setup of pairing a Taiwan old-timer with a newbie, and presenting this in parallel, alternating commentary. Veteran travel writer Joshua Samuel Brown is showing his partner Stephanie Huffman – on her first trip to Asia – around Taiwan before they settle down in Taipei. It’s important that she like the place, which adds a bit of edge to the travels. The framework is more than a gimmick designed to look good in a blurb – Brown and Huffman’s adventures are an intimate slice of real life with meaningful consequences for the authors. Soon after becoming a couple in Portland, Brown made it clear that he loved Taiwan and planned to return: the country and him came as a package. Four years later after living together, the (unmarried) couple left the United States for Taiwan.

The places visited and the activities engaged in by the forty-something couple reflect their – and especially Huffman’s – interests. So on top of the usual attractions like temples and night markets, there’s an emphasis on arts and crafts, puppets, and a few feminine twists such as a spa treatment at the Grand Hyatt. In the case of the last, it’s not a place Brown would normally have chosen for himself. Of the three-hour “Calm” couple spa session, Brown says:

I count among my phobias mild claustrophobia and fear of cannibals, so being seasoned, wrapped in plastic, and set on a heated table isn’t my idea of an ideal date. Furthermore, I’m not a “three-hour spa treatment” type of guy, or indeed a three-hour anything kind of guy. I had a hard time sitting through Lord of the Rings.

Woah! A dig at The Lord of the Rings! Blasphemy to any patriotic New Zealander. Brown better not plan on writing a travel guide to my home country anytime soon.

Brown writes about Taiwan with wit and affection, which is not always an easy combination – humor, almost by definition, involves some cruelty. Huffman is good-natured, too, and gives a positive spin to her adventures. As readers we’re rooting for her to be able to keep up with Brown, professional traveller on his home turf, which she does indeed do.

After traveling down the beautiful East Coast, they take the ferry from Taitung to Green Island, a notoriously nausea-inducing crossing which lives up to its reputation. Huffman writes:

What followed over the next forty-five minutes was a challenge in meditation.

Boat up, boat down, breathe in, breathe out… ignore retching sounds, ignore odor of vomit…

Time seemed to have been suspended. I thought of looking at my phone to see how much longer we had left of the ride, but quickly realized that to do so would be to court vomiting….

With the help of seasickness tablets, they made it to the island with breakfast intact. However, on their return voyage Brown “lost his turnip cake halfway across.” Later in the book, Brown’s kryptonite – motion sickness – makes another appearance. On a trip to the remote aboriginal village of Smangus, the winding mountain road proves too much for Brown’s breakfast.

We piled back into the car for more climbing and switchbacks through some of the most beautiful country and on one of the worst roads I’d been on yet in Taiwan. Josh managed to not vomit again, but I knew he wasn’t feeling well. He wasn’t talking, which is highly unusual.

The two Americans attend a weiya for the East Coast National Scenic Area staff. A weiya is a company dinner party held before the New Year vacation, often involving enforced cheesy camaraderie and horrors of horrors – karaoke. It’s a good setting for cultural observations and some caustic asides, but instead we get an unexpectantly moving passage from Brown about his love of Taiwan. He explains his choice of song, an old Teresa Teng classic called “The Moon Represents My Heart,” with heartfelt sentiments of love and gratitude.

Once it drew me into its gravity, this strange and alien land I’ve chosen to call home for long stretches has been the one true constant in my life. Taiwan has granted me a near-constant reprieve from my most feared nemesis, boredom, but at times she’s driven me half-mad. Taiwan has been my muse, the source of inspiration for much of my creative output as a writer, while at the same time never quite letting me forget that the language in which I write is not the lingua franca of the place about which I write. I have loved Taiwan for nearly all of my adult life. At times this love has shone as brilliantly as the moon over Kenting during the Mid-Autumn Festival, at others far less brightly, like a crescent moon during the long rainy season in Taipei,…. So when I sang it was this love for Taiwan, waxing and waning, but always present, that I felt.

One of the more remarkable parts of Formosa Moon is a fortune telling episode of Brown with a Madame Chen in Tainan, who warns of the couple’s financial incompatibility for marriage. What Brown thought would be a light bit of fun and good local color for the book, gets rather intense.

“You two shouldn’t get married,” proclaimed Madame Chen, which I found quite a blunt statement coming from either a Taiwanese person or a person in the nominally New Age industry. I was taken aback.

Brown presses for clarification, assuming that she’s referring to them getting married in the near future.

“No,” she said. “Ever. You can stay together, for the rest of your lives even. But you should never make yourselves financially bound to one another. To do so will court disagreement.”

Huffman returned to Madame Chen the next day without Brown and on top of repeating the previous warnings the fortune teller added some interesting new predictions.

After that, a bit worn down by being on the road for a month, and with Chinese New Year approaching – a good time to avoid travel – Brown and Huffman took a break from traveling and headed back to Taipei to see an apartment which had become newly available. Thus begins the second part of the book “Settling In and Further Excursions.”

Their home in New Garden City, a green hilly area to the south of the city, seems ideal, especially with a nice apartment at a bargain price. They’re away from the bustle, pollution, and madness of Taipei City. But not the noise, which has them referring to their Garden Road location as “Dog Lane.” Brown writes:

The price was a series of morning wake-up calls in the form of high-pitched yapping from the poodle schnauzers at the end of the street, bellicose barking from the nasty mastiffs three doors down, all echoed by indeterminate dog noises from the dozen or so other canines on Dog Lane. The first dog alarm generally began at dawn before dying down for a while until some other trigger caused one of the dogs to bark, in turn causing all of the dogs to start over again.

They were sometimes quiet during the day, except when they weren’t, and largely quieter at night except when one of them caught the scent of a stray or some other animal intruding into the neighborhood, or when someone on the block coughed in their sleep, sounding off the bark alarm yet again.

Funny stuff. As I suggested before, humor requires an element of suffering. Apart from the noise, the couple – Huffman especially – also found the location too out of the way and the lifestyle isolating. Huffman writes “Life in New Garden City was becoming increasingly stressful. As the sun rose earlier, so did the canine orchestra. Even with earplugs, we were not getting a full night’s sleep and fatigue was setting in.”

Rescue came in the form of her acceptance to a master’s program in East Asian studies at National Chengchi University, which necessitated a move into Taipei. I wonder how she will feel about Taiwan after her two years at the university. The book ends with her accurate observation that: “Taiwan is never boring, and if there’s one thing I expect, life here will continue to be interesting. The adventure continues.”

Formosa Moon is a singular book, a quirky mix of memoir, travelogue, and practical travel information. It’s well written, immensely likeable, and informed. I started the book thinking the switching of the text passages between the two authors would get old by the end, but it didn’t. Nor was it ever confusing: there are circular portrait icons of Brown and Huffman marking each change of the baton. The pairing of new eyes with an old Taiwan hand works beautifully. Of course, having a good idea and executing it effectively are two different matters. This is where Brown’s writing talents come in. He has a good nose for anecdotes, story hooks, segues, and funny phrasing. 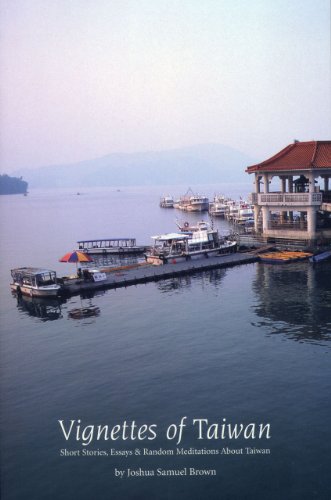 Brown first came to Taiwan in 1994 to teach English, and his Vignettes of Taiwan (2006) describes his first decade on the island. That book lead to his working on various Lonely Planet travel guides, including the one for Taiwan. If you’d like to read more of his Taiwan travel-related writing, have a look at the online journal for My Taiwan Tour.

Formosa Moon is published by ThingsAsian Press. It is available from Amazon.com and various other retailers. It’s worth noting that the US$18.95 price is outstanding value for a lavishly illustrated color paperback of 330 pages.