Establishing a winery in an exotic locale is the kind of project we might daydream about, but one we have the good sense not to actually pursue. Englishman Chris Ruffle didn’t have such sense. Rather, he made his mission even harder by doing it in China, and from scratch, and, to top it off, building a Scottish-style castle at the winery. The highs and lows of this adventure are told with great honesty and humour in A Decent Bottle of Wine in China. 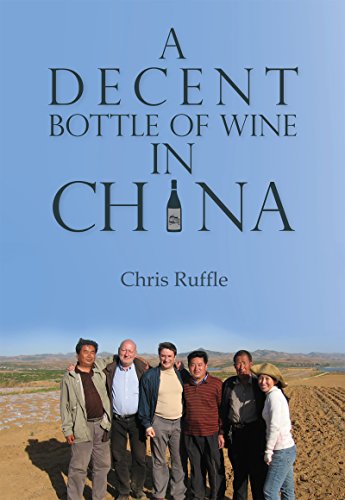 The idea for the vineyard came from a chance encounter in 2004. Ruffle, who at the time enjoyed a glass of wine but was very much a novice, was visiting a winery in Shanxi province. French winemaker Gérard Colin mentioned a valley in Shandong, which he thought would be ideal for a vineyard. Later that year, Ruffle found and secured an ideal location in the area. He rented 14 hectares for the vineyard and secured a lease of 10 hectares for the castle.

While the project was something of a whim and Ruffle had no background in wine, he did – as a successful Shanghai-based funds-manager – know China and have deep pockets. With typical self-deprecation, Ruffle explains the origins of his engagement with the country:

My involvement with China was not the result of any far-sighted plan, but merely of youthful rebellion. Tired of being asked what I wanted to study at university, I picked the strangest subjects I could think of: Chinese with Philosophy.

He studied Chinese at Oxford, “one of only four students in my year in the whole university, in the late 1970s.” In 1983 he went to Beijing to work for a metals-trading firm. He worked as a financial analyst during Japan’s booming late 80s, then did stints in Taipei and Hong Kong. Since 2002 he has lived in Shanghai, where he runs a fund management company called Open Door.

Ruffle planted vines in 2005 and had his first harvest in 2007. Unseasonal rains damaged most of the grapes, and the wine made from the remainder was barely drinkable let alone saleable. 2010 was another disastrous year; a wet summer and mismanagement meant that not a single grape was harvested.

Ruffle began to have doubts about his dream project. Was the area – with so much summer rainfall and high humidity – suitable for wine growing? Was it really possible to manage the vineyard remotely from Shanghai “given the local incompetence and graft”? Ruffle’s Taiwanese wife had fewer doubts; she knew it was a slow-motion train wreck:

… after her early support she had now come to regard the enterprise as a hopeless money pit. However, in fairness, it should be said that she has the same view of all investment in China. Her grandfather, a landlord in Jiangsu, had his ancestral land confiscated by the Communists; it was 300 mu in area, exactly the same as our vineyard.

On top of the weather woes, there were staffing problems; the local workers had no experience with grape growing and there was a high turnover of foreign managers. Moreover, bureaucratic wheels required greasing with countless expressions of goodwill (read: bribery or mutual assistance depending on how legalistic you want to be). Ruffle describes an exchange with an official:

“If there is ever anything we can ever do for you, you have only to ask.”

“Handbags,” she said, setting aside her clipboard.

Apparently the key is to leave the original invoices inside, to show that they are real brand-name handbags, and not fakes.

A reoccurring theme of the book is Ruffle’s naivety and misfortune in repeatedly getting ripped off. Take his cook, for example, a Mrs. Zhao, who Ruffle and his wife let stay in their Shanghai home to escape her violent husband.

[about US$2,860] to allow her chronically unemployed husband to offer a taxi service, and start to provide for their two daughters, we were delighted to help. She would gradually pay us back out of her salary. Yes, you guessed it. After we handed over the money, we never saw her again.

It’s not just the locals taking advantage of him or letting him down. He mentions helping an unemployed friend, but being betrayed and ending up $400,000 out of pocket. Ruffle writes, “Truly, no good deed goes unpunished.”

Ruffle comes off as a likeable eccentric, and yet – about two-thirds of the way through the book – as stories of being wronged build up, you start to wonder if something is amiss. Before writing this review, I actually made a couple of enquiries on the grapevine, and didn’t hear anything bad, so I’ll give Ruffle the benefit of the doubt. However, I think some of the author’s minor grievances should have been edited out so that the reader isn’t left guessing.

We had our first paying guests at the farmhouse. My university friend Lindsay, accompanied by her unpleasant boyfriend from Hong Kong, visited Mulanguo. Apparently the boyfriend had thought he was spending the weekend amidst the bright lights of Shanghai, rather than stuck in rural Shandong, which probably accounts for his ill-humour and heavy drinking.

The book has an almost autistic candidness in showing the author’s mistakes, and also those of others, a rawness that comes from the book using so much of Ruffle’s diary. This sometimes results in the jumbled tenses and time phrases. There are also letters and emails quoted in their entirety, which would be better suited to a blog than a book, and there’s a needlessly long passage on a castle restoration in Scotland.

Despite these shortcomings, I highly recommend A Decent Bottle of Wine in China. It’s funny, revealing and well written. The author’s persistence and optimism are uplifting. What sets the story apart from most other China books is the deep look it gives you of how things work on the ground. Setting up and running a business is a hard education, something the foreign reporter, teacher, company employee never gets. Writers can, for example, live in a Beijing hutong or in a remote village for a few years and imagine they’re getting the authentic low-down, but they don’t have enough skin in the game. Let them sink over a million dollars of their own money into a project and see how everything goes.

Today, the castle is up and running as a hotel and restaurant: have a look at the pictures on Tripadvisor if you’re curious. The winery is producing a variety of reds and whites. The first wine to be bottled was a Marselan/Merlot blend from 2009. It was bottled in late 2010 under the wonderful name Treaty Port Vineyards, (in homage to the nearby city of Yantai, which was once a treaty port known as Chefoo). It’s a brave name choice – Camphor Press toyed with the name Treaty Port Press before deciding it was a too place- and time-specific, and also slightly incendiary. Ruffle wisely used a different Chinese name (Denglong Hongjiu, or roughly “Rising Dragon Red Wine”)

Though the operation hasn’t yet reached the break-even point, Ruffle is optimistic that Treaty Port Vineyards has a bright future. Regardless of the balance sheet, it’s been a hell of a ride and quite an education.

I have learnt a lot from the project. About wine and architecture, about how the Communist Party works and about the Chinese countryside. I have got tangible satisfaction from seeing people appreciate what I have created. I have enjoyed a front row seat through an incredible period in China’s development.

A Decent Bottle of Wine in China is published by Earnshaw Books.

It can also be purchased from Amazon.com, Amazon.co.uk, and other retailers.