Home/Reviews, Uncategorised/City of Protest: A Recent History of Dissent in Hong Kong • Antony Dapiran
Previous Next

Even for those of us familiar with Hong Kong, the Umbrella Movement of 2014, which saw supposedly apathetic Hong Kongers occupying the heart of the city with mass sit-in protests, came as a big surprise. It shouldn’t have. Antony Dapiran’s City of Protest: A recent history of dissent in Hong Kong explains how these protests did not materialise out of the blue. They were, in fact, part of the city’s rich legacy of political dissent, one stretching back to the 1960s and particularly intense since the transfer of sovereignty to China in 1997.

Dapiran writes with such reasonableness and no-fuss clarity that you not only come away from this quick read with a thorough understanding of Hong Kong protests past and present, but imagining that you already knew most of it and had things figured out in the first place – you just needed some framing and the odd gap filled in. 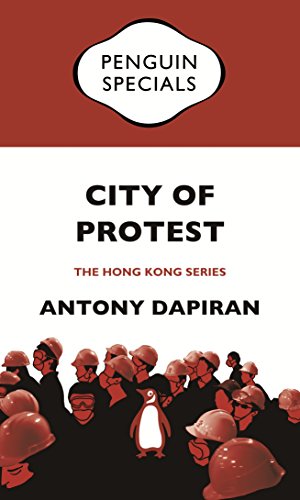 The main reason for the high number of protests in Hong Kong is, according to the author, their efficacy:

Hong Kongers are renowned for being pragmatic, and there is indeed a pragmatic reason for protesting in Hong Kong: it often works. In many cases, protesters’ demands have been met, most notably overturning the Article 23 anti-subversion legislation in 2003, forcing Chief Executive Tung Chee-Hwa’s resignation following protests in 2004 and scrapping the Moral and National Education Curriculum in 2012.

Another reason for the prevalence of public protests is that they have become part of Hong Kongers’ self-identity, with the freedom to voice one’s opinions a proud contrast to the crushing authoritarianism in China.

Daparin’s historical survey of protests starts in 1966 when the Star Ferry Company raised fares. The following year the city was rocked by leftist riots, driven by a mix of internal and external forces. Over the border, of course, China was a year into the chaos of the Cultural Revolution, and around the world revolution was in the air. In Hong Kong there were industrial protests and strikes organized by unions, and in the summer the city was hit by terrorist bombings.

By the time the disorder was brought to an end in the September of 1967, fifty-one people had been killed (including ten police officers) and 832 injured. Police reported over 8000 suspected bombs, of which over 1000 were genuine. Almost 2000 people were convicted of various offences, including rioting, unlawful assembly and explosive offences.

Daparin says that despite the deplorable violence of the 1966–1967 protests, they were:

the catalyst for the wide-ranging social reforms implemented in Hong Kong in the 1970s.5 They highlighted deep social problems in Hong Kong: poverty, inequality, a lack of labour rights and inadequate education and housing. Hong Kong at the time had no social security system, no unemployment insurance and no public pension or retirement scheme. The riots drew government attention to these issues and prompted a rapid, broad-ranging response.

Another case of protests bearing fruit occurred in the early 1970s, when a police corruption scandal led to a judicial inquiry and, in turn, to the establishment of Hong Kong’s Independent Commission Against Corruption.

China’s 1989 Tiananmen Protests saw millions in Hong Kong taking to the streets. Alongside expressing solidarity with the protesters in Beijing, Hong Kongers were voicing anger at their own leaders. The 1984 Joint Declaration between China and the United Kingdom, which set out the conditions of the “one country, two systems” for the fifty years after the 1997 handover, was considered a sellout.

The last governor of Hong Kong, Chris Patten, thought likewise, and sought to strengthen freedoms and democracy. After the handover, Beijing rolled back some of Patten’s initiatives and as the law stands today any protest of fifty people or more requires prior permission from the authorities.

Many Umbrella Movement protesters were arrested and charged under the Public Order Ordinance. It is remarkable that a piece of colonial-era legislation – criticised at the time of its introduction almost fifty years ago as excessive and unjustified – should still be used to police political expression in the twenty-first century.

City of Protest is not an anti-PRC polemic. Dapiran describes protests where the villains were local businessmen. He looks at the emergence of social movements focused on protecting the environment and cultural heritage of the city from these business interests. Examples covered include the mostly unsuccessful campaigns to save the historic Star Ferry and Queen’s Piers in Central, Hong Kong Island.

The longest chapter in the book is devoted to the Umbrella Movement of 2014. Although the protests sprung from anger at a lack of progress on expected electoral reforms, its roots are best traced back to the summer of 2012 with proposed curriculum changes.

Parents as well as teachers and students were outraged at what they saw as biased, inaccurate information about the Mainland and sycophantic praise of the central government, with no encouragement of independent or critical thinking. In response, a group of secondary school students led by fifteen-year-old Joshua Wong founded an activist group called Scholarism.

The government backed down but Scholarism would continue campaigning and become a key player in the Umbrella Movement. For details of those protests, you can read the book. You get a tremendous feel for what they meant emotionally to the participants and supporters. There’s humor, too, in the geeky Hong Kong youth flavor of the occupation of downtown streets.

There was also the ‘Homework Zone’, to the delight and fascination of many. The Homework Zone began when a volunteer carpenter hammered together some planks to make a few desks over a traffic barrier so that students would have a more comfortable place to study. From there it grew and grew, with more furniture being constructed every day. Marquees were pitched above the desks to protect students from the elements. Then carpet was laid down, and a diesel generator installed to light night-time study sessions and facilitate free Wi-Fi. Volunteers provided tutoring, with a sign posted advising which tutors were on duty.

Although the Umbrella Movement protesters did not succeed in having their demands met, the author doesn’t consider the movement a failure. Protest leaders have since gone on to form new political parties, and at a broader level, there has been an awakening: “…the Umbrella Movement served to politicise a generation of youth in Hong Kong and demolished the myth that Hong Kong people – in particular young people – do not care about politics.”

The last chapter looks towards the future. Dapiran has the good sense to avoid making any grand predictions. He points out the unique predicament Hong Kong is in, a situation former Governor Chris Patten described as “liberty without democracy,” citizens neither able to vote out their government, nor participate in policy-making in a meaningful way, yet still enjoying freedoms to express their dissatisfaction. We should expect more protests in the coming years.

City of Protest is one of a series of Penguin Specials on Hong Kong marking the twentieth anniversary of the handover. These are short books you can read in a few hours.

Daparin writes in a straightforward manner and with obvious affection for the city, which he has called home for fifteen years. His writing lacks perhaps the flourish of the professional writer. Yes, his byline says “lawyer and writer” and his articles have appeared in publications such as the New York Times, but who would bet their finest bottle that the writing is the occupation that puts food on the table? But I found the lack of writer artifice admirable; a more egotistical writer would have placed himself in the foreground and dropped names, would have been more partisan. Instead, the writing is even-handed, with the measured (though not dull) wording befitting a lawyer, and the broad perspective of someone who has spent years living in China and is fluent in Mandarin Chinese. Above all, City of Protest is effortlessly informative.

City of Protest: A Recent History of Dissent in Hong Kong is published by Penguin Australia, and is also available from Amazon.com and other retailers.