The striking originality of this novel starts with the sub-title. What to make of the declaration (warning?) that this is an “anti-travel novel”? The story takes us on a roll call of Asian travel destinations – Bangkok, Vientiane, Shanghai , Hanoi, Phnom Penh, Hong Kong, Manila, Jakarta, Bali, Seoul, Mumbai , Kolkata, Goa, and Varanasi – but don’t expect breath-taking vistas, enchanting local color, and inspiring adventures. You’ll likely turn the last page of the book without an increased desire to visit any of those places, or to hit the road at all. Neither do the people in the novel shine, whether the characters of the novel themselves, their fellow tourists, or many of the local people encountered. Anti-travel indeed. 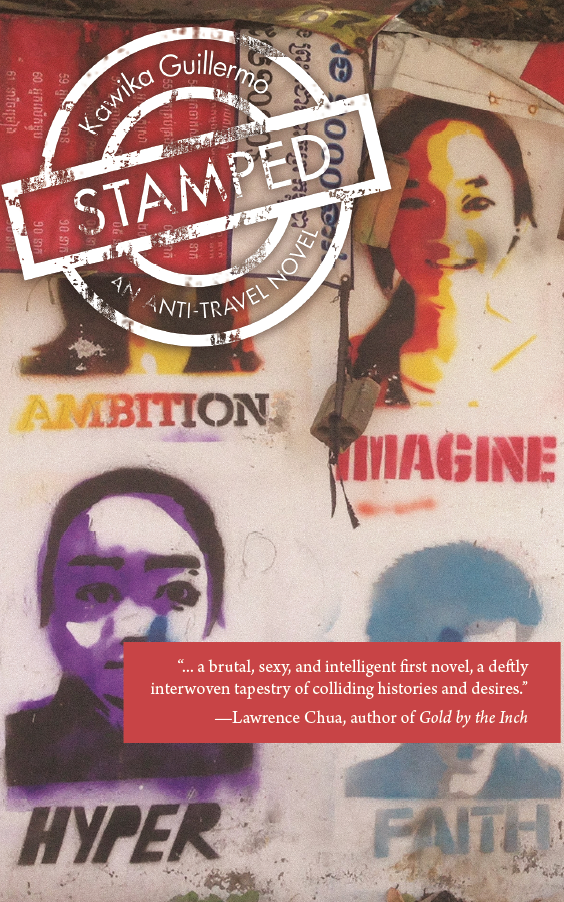 The plot revolves around young American Skyler Faralan, who seeks escape from his suffocating life back home by wandering around Asia. He eventually crosses paths with other achievement-free and personality-challenged travelers: there’s Sophea, a moody NGO volunteer, Arthur, recently abandoned by his Chinese wife, and Winston, something of an intellectual poser. They end up traveling together, united it seems in part by their shared feeling of having marginalised identities (or, in my opinion, carrying chips on their shoulders). According to Cambodian-American Sophea:

“Most travelers can be separated into three groups,” she tells you. “Sexpats, drugpats, and ecopats. Then there’s a fourth group. The people who were rejected from their country, and everywhere they go too. They can’t stop moving, rejecting every city before it can reject them. You and I, we know where we fall.”

The opening line of the novel sees Skyler in Bangkok with just five hundred dollars and an indifference to his life bordering on the suicidal. “The plan is to travel until the pain runs you over.” He has “hopes of perishing in a blaze of hardcore travel glory.” He’s broken with his country, religion, family, girlfriend, and along the way he’ll break with his gender identity and change his name to Kawika. If that name sounds familiar, yes, it’s the author’s (at least the penname he uses for his writing). Like the author, who is an Assistant Professor at Hong Kong Baptist University’s Department of Humanities and Creative Writing, the character has a part Filipino heritage and isn’t heterosexual.

Sexual, racial, and ethnic identity loom large in Stamped. The majority of the characters are non-white. Here’s Winston explaining his ancestral background:

“A quarter Ghanaian, West Coast Africa by way of slave ships and rape-happy slave masters, another quarter Brazilian black by way of Spanish colonial rapists, then a fourth Japanese by way of forced occupation and systematic rape of local women—that was my grandmother, a Filipina comfort woman.”

Some of the characters of the novel see tourism as a modern form of colonialism, and tourists (especially white tourists) are described in negative terms. Skyler asks: “Why is it wherever I go it’s always brown people serving white people and not the other way around?” I can relate to being embarrassed by the bad behaviour of fellow tourists letting the side down, but when reading these passages it raised a question: Why visit tourist traps like Kuta Beach in Bali and Bangkok’s Khao San Road if you dislike the tourist hordes, especially when you’re a hardened traveller who has been on the road for months?

Skyler’s shoestring travels take a physical toll on him. “After five months of traveling around Southeast Asia he felt like a skeleton.” With “muscle and tissue melted off” he has “nearly starved himself unrecognizable.” His family and ex-girlfriend are worried and raise money for him to fly home. He takes the money but spends it on further travels rather than a plane ticket back to the States. When his family ask about this, his texted response is: “To everyone:  Thanks for the cash, but I won’t forgive you that easily. Also fuck you all.  -Your punk”

This raises a general point about the main characters. Although they’re quirkily interesting and realistically drawn (I’ve met people like them) they’re not very likeable.  They are not so flawed that I was wishing them sudden deaths by lightning strikes or such, but I wouldn’t want to spend time with them. But then again, they’d not want to spend time with me. I’m an old-fashioned white guy with a weakness for colonial nostalgia, and one prone to daydreaming visions of colonial administration and maverick exploration. I still hold to my childhood conception that travel should involve an element of heroic quest – an expedition to find traces of an ancient city, fieldwork to help catalog and conserve rare wildlife – or at least be educational, whether learning something about the culture or just satisfying the desire to see what lies beyond the farthest hill.

Despite of all that, I’m glad I read Stamped. It’s an original, strikingly honest, and well-written story with a strong authorial voice. At times it feels, in a good way, like an immersive hallucinatory version of people-watching, the reader given a telepathic ability to eavesdrop on the conversations and deepest thoughts of those around us.

The writing is inventive and fun: an example of the latter being when Arthur, the only white male character in the novel, is taking a taxi in China:

The driver shouted on his cell phone in that impossible language. “Kidneys!” Arthur imagined the driver saying. “Fresh kidneys! I got a foreigner here with fresh kidneys, any takers? Or how about clean, pollution-free lungs?”

The novel is full of memorable phrasing such as in this passage when we first meet Winston:

He sat next to her and introduced himself as Winston. And Winston came complete with a triangle smile, a permanent five o’clock shadow, and peppery hair shaped like the pages of a tossed-open book. He spoke with a puzzling accent, sometimes British, sometimes American, sometimes Australian, as if he had been raised in an expat bar.

Nice writing and for me three notable phrases there that I’ve not come across before: “a triangle smile,” hair compared to “the pages of a tossed-open book,” “raised in an expat bar,” and all that in just a few lines.

Stamped will appeal to progressive-minded readers of literary fiction and travel writing, especially those with an interest in Asia or the Asian American experience. It’s published by Westphalia Press, which is an imprint of the Policy Studies Organization (PSO), an academic organization whose purpose is to disseminate scholarship and information. They back this goal up with an admirable (but all-too-rare) pricing policy. Both academic and general titles are priced for maximum readership, in the case of Stamped, $6.99 for the eBook and US$15.99 for the paperback.