“Why should I blame anyone but myself if I cannot understand what I know nothing about?”

We are all—even the best of us—quick to judge. The unfamiliar confuses, upsets, and undermines our conventions, forcing us to put aside what we’re accustomed to, including the distinct, learned ways in which we’ve come to think. This is uncomfortable for many, as it presupposes an inherent deficit, if not outright fault, on the part of the observer. Pablo Picasso penned the line above in a statement entitled “Picasso Speaks” to voice his frustrations at those who would so easily dismiss his art. “I do not read English,” he argued, but “this does not mean that the English language does not exist.” 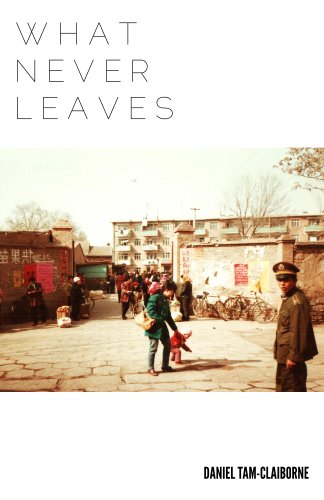 The impulse toward summary judgment is common among expats in Asia, and too many memoirs have been written in such a vein, stressing the kooky and the exotic, while complaining about the backwardness of the place. This isn’t to say that the perspective is baseless, but rather that it’s a boorish, too-obvious way of looking at the world. Oftentimes, what we dismiss as weird is actually surprisingly complex (think Cubism)—it just takes a willingness to engage with one’s environment empathetically (and long) enough to understand.

Daniel Tam-Claiborne’s debut work of fiction, What Never Leaves, a selection of twenty-two short stories (or, perhaps more accurately, vignettes) detailing the experiences of an English teacher in rural China, does just this; it is an earnest attempt to process two years lived abroad, written with an honesty and vulnerability that jumps off the page. Tam-Claiborne details episodes that will be familiar to anyone who has lived in-country (the initial disorientation of one’s arrival, the constant staring, the uneasy relationship with local “Western” food, being offered acting gigs solely on the basis of one’s nationality), and his ability to write about such everyday observations with sincerity and compassion lends a real credibility to the text. There is no posturing here, and although some readers may find the narrator, at times, bungling and naïve, he feels like an honest representation of the callow, well-intentioned, foreign teacher archetype.

Much of the book takes place in Taigu, a northern backwater “lying in the heart of Shanxi province, about an hour away from the capital city of Taiyuan and seven hours southwest of Beijing,” where the author himself lived for two years after graduating from college. Like the narrator (who’s also named Daniel), Tam-Claiborne was the recipient of a Shansi Fellowship, which provides graduates of Oberlin College with “opportunities for long-term, immersive, cross-cultural exchanges” in Asia. Not surprisingly, WNL reads less like a short story collection and more like a travelogue or memoir, although exactly to what extent scenes in the book mirror real life, only the author and his former colleagues will ever know.

The book will certainly be a challenge for those who have never lived abroad, particularly in China, since there’s nothing in the way of a traditional narrative arc holding the stories together. There’s a chronological progression to the vignettes, which are grouped according to the seven stages of culture shock (Arrival, Settling In, Rejection, Despair, Clarity, Acceptance, and lastly, Leaving), and though this does provide a measure of structure to the work, it’s probably not enough to maintain the interest of readers without any direct connection to teaching and/or China. WNL is a slice-of-life tale that’s best opened with the expectation of reading one man’s journal. But it is a beautiful, introspective, and truthful recounting, and that certainly has its worth.

Another issue the author wrestles with is his mixed-race heritage; as the son of a Chinese mother, he quickly comes to realize that “there was a whole other level to my experience living there that lay beneath the surface.” His students wonder at his black hair, he senses “an intrinsic connection to the place … borne of the spiritual more than anything else,” and he is denied an acting gig in a television drama when the director learns about his mother, asking, in utter bewilderment, “Then how can you say that you’re American?” Much of the book focuses on the narrator trying to make sense of his position: When is he a Chinese versus a foreigner? A teacher versus a friend? WNL is filled with such doubts, and this creates a psychological backdrop to the text which allows one to feel as if he/she were there. And now, knowing something about the experience, the reader—by way of the narrator—can start to understand.

What Never Leaves is published by WilderVoice Books and is available from Amazon.com and various other retailers.

About the Author: Quincy Carroll

Quincy Carroll is the author of Up to the Mountains and Down to the Countryside.