Home/Reviews/China’s Leaders: From Mao to Now • David Shambaugh
Previous Next

“Compared to…?” It’s a useful retort, a shorthand way of asking for context.

“The world today is so unstable!” “Compared to when?“

“Is your mother-in-law nice?” “Compared to what?”

And when it comes to an assessment of Chinese leader Xi Jinping and his era, a comparative approach is an efficient way forward: besides, it’s certainly more interesting to compare and contrast Xi with his predecessors than to sift contemporary media reports or, heaven forbid, wade through Xi’s own words, the likes of his 1,784-page three-volume masterpiece The Governance of China. 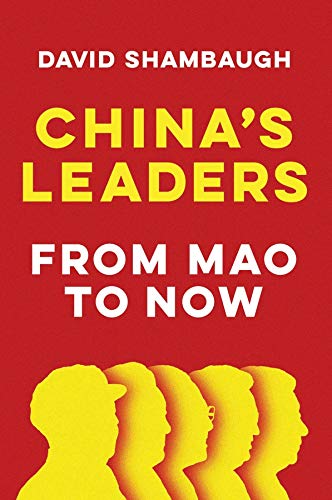 In China’s Leaders: From Mao to Now, political scientist and prolific author David Shambaugh gives a superb overview of the Chinese Communist Party’s seven-decade rule through profiles of five main leaders. First up is Mao Zedong, who bestrode the People’s Republic of China from its founding in 1949 until his death in 1976. Shambaugh characterizes him as “a populist tyrant.” Next is “pragmatic Leninist” Deng Xiaoping (1977–1989), whose achievements undoing the madness of the Mao years were stained by the Tiananmen massacre. After that we have “bureaucratic politician” Jiang Zemin (1989–2002) and “technocratic apparatchik” Hu Jintao (2002–2012). From 2012 until now (and perhaps until his death because he removed term limits in 2018) is “modern emperor” Xi Jinping.

The book covers a few other influential men (and it is all men), such as Hua Guofeng and Hu Yaobang, but sticks closely to covering and comparing the five main leaders. It’s a simple framework but it works brilliantly – five is a manageable number allowing for a perfect balance of detail and overview.

There are many reasons to read China’s Leaders: for a basic history of the PRC; for a look at Xi Jinping in context; to learn something about Jiang Zemin or Hu Jintao without reading a full-length biography; and to get a concise, balanced account of Mao Zedong. This last point is not a minor one. Choosing a book on Mao is problematic – most works struggle to avoid bias and overreach in describing his motives. Because any standalone Mao biography has to justify its existence in a crowded field, it typically promises some new information or at least a revisionist interpretation, and with this need there’s a tendency to overemphasise the new angles and findings when what the reader usually wants is the straightforward basics. There’s also the length issue: Philip Short’s Mao: The Man Who Made China runs to 846 pages. Even at half that length, Andrew Walder’s superb China Under Mao may intimidate many. Shambaugh’s treatment of Mao is measured though tough. As with the other sections of China’s Leaders, it’s reasonable and thorough – you can use his body counts and assessments of tragedies with confidence.

I read China’s Leaders from curiosity about Shambaugh’s take on Xi Jinping. Although sometimes described as the strongest leader since Mao, Shambaugh correctly writes that Xi has been less important: “the changes he has made to the system have been largely additive rather than fundamental and original.” He does get the crown of most repressive since Mao – Deng might have Tiananmen on his record, but the crackdown was relatively short-lived and mostly in Beijing. Compare that with Xi in Xinjiang, Tibet, Hong Kong, and in China itself.

Looking at various leadership skills, Shambaugh’s judgments include: Xi possesses vision, as did Mao and Deng. Another Xi virtue is organizational capacity, also exhibited by Deng and Jiang. As for the character trait of narcissism:

Mao had a severe case of narcissism, Xi Jinping has a very strong case, and Jiang Zemin had a mild case. Deng Xiaoping and Hu Jintao were self-effacing individuals who were not so inclined (although in Deng’s case the propaganda apparatus nonetheless still tried to create such a cult of personality).

The author says that of the five leaders, only Mao and Xi displayed “so-called emotional intelligence—the ability to read and channel others’ emotional needs … to inspire and incentivize followers.

The quality Xi possesses which is his alone is being a good public communicator. In the West this is typically an entry-level requirement for politics, but past and present this has not been the case in China. “Mao and Deng were poor public speakers, while both Jiang and Hu were rather robotic in their public presentations (Jiang was just the opposite in private).”

The book is illustrated with photographs. Graphs and tables make information more digestible, and sometimes bullet points are used for lists, such as when the author gives a series of assumptions (often subliminal) with which China’s leaders are inculcated with. A few examples:

A striking commonality Shambaugh reveals by examining the childhood and formative experiences of the five men is that: “only one of the five (Jiang Zemin) grew up in a close-knit and stable nuclear family environment. All the others had very disrupted youths with absent or deceased parents.”

Xi Jinping was born into CCP royalty in 1953 in Beijing. His father was a senior leader and a Long March veteran. As such, Xi enjoyed a pampered early life. It was soon upended, however, when his father was purged in 1962. Xi was nine at the time, and sent to a boarding school. His father was kept under house arrest, and then in 1965 sent away to do manual labor in a factory.

In 1967, when Xi was a mere 14 years old, and the Cultural Revolution was raging, his father was again denounced and dragged before hordes of raging Red Guards in the city of Xian (but apparently he was not beaten or tortured) and sent to a nearby labor camp. A year later, in 1968, he was returned to Beijing (perhaps at the behest of Zhou Enlai, who did his best to protect purged senior officials) and incarcerated. He was only released and rehabilitated following Mao’s death and Deng Xiaoping’s return to power in 1978.

In 1969 Xi, soon to turn 16, was dispatched along with five thousand other elite Beijing youth to labor in the bleak countryside in northern Shaanxi Province. Life was tough, but he gradually adapted and then prospered, gaining acceptance and climbing the ranks. “At the age of 22 Xi was selected as the only youth from the entire province to be admitted to prestigious Tsinghua University, ironically as a “worker-peasant-soldier” (工农兵) student, which was a new admittance program to send children from the countryside and proletarian class backgrounds.”

In total, Xi’s father spent sixteen years in detention for a non-existent crime. And yet Xi has fond memories of the Cultural Revolution and chooses to echo Mao. So much for that great Confucian virtue of filial piety!

In many policy spheres, but particularly with regard to the Party, Xi is retrogressive rather than progressive, repressive rather than empowering. His preferred leadership style and policy preferences are rooted in the Mao era and early years of the People’s Republic. Indeed, there is an apparent element of neo-Stalinist style in his rule.

In the words of Xi at the 19th Party Congress in 2017 Xi: “The Party exercises overall leadership over all areas of endeavor in every part of the country. . . . It doesn’t matter whether it is the government, the military, the people, or the schools; east, west, north, south, or the center—the Party rules everything.”

Shambaugh gives a telling example of what befalls those who fail to show the party sufficient respect: “Shandong citizen Wang Jianfeng was sentenced to 22 months in prison for calling Xi a baozi (dumpling) and “Maoist thug” on his WeChat account.”

I highly recommended China’s Leaders for the general reader and university students (and their teachers). It’s an intelligent yet accessible and readable overview of China since 1949 and a close-up look at the men who have shaped the country.

China’s Leaders: From Mao to Now is published by Polity Press.