China’s censors can be a sensitive bunch.

Once upon a time, I worked as an “Editorial Assistant” on a tier-2 city expat rag. Though little more than a glorified copy writer and far removed from the forefront of cutting journalism (my biggest scoop was tracking down the reservation number of a local teppanyaki joint), I still managed to have the occasional brush with China’s hard-working censors.

March 5th in China is Lei Feng Day – named after and celebrating a soldier who posthumously became a Communist role model – and as part of a March edition of the magazine we decided to include a puff piece on Lei Feng. For the cover we chose a glorious Cultural Revolution propaganda poster featuring a rosy-cheeked Lei Feng valiantly leading the masses of the world towards a bright future of volunteerism.

When our censor informed us that we couldn’t run the cover, we were confused. Was the Cultural Revolution era poster too politically sensitive? The rejection coincided with one of the censor’s ad-hoc visits to the office, so we had the rare opportunity to ask the censor (a middle-aged woman with a bureaucratic job in a local university) what the issue was.

The problem with the cover, she explained, was the inclusion of several black Africans amongst the volunteers in the crowd behind Lei Feng. She insisted that her objection didn’t stem from racism – she had no problem with black people. However, featuring black people as volunteers implied that they were more likely to volunteer and do good deeds than Chinese people were. To her, the fact that the revolutionary crowd included three fictional Africans was a damning indictment that three fictional Chinese had decided to stay at home that day. Her suggestion was to lighten the skin colour of the Africans so that that they appeared to be Chinese. With little time left before our monthly deadline, we had little choice but to swallow our distaste and put the Africans through the whitewash.

Such is the logic of China’s mysterious censors, something all too familiar to Australian JFK Miller, editor of the well-known expat magazine That’s Shanghai from 2005 to 2011. In his debut book Trickle-Down Censorship, Miller recounts the trials and tribulations of being an editor within one of the world’s most censorious regimes. 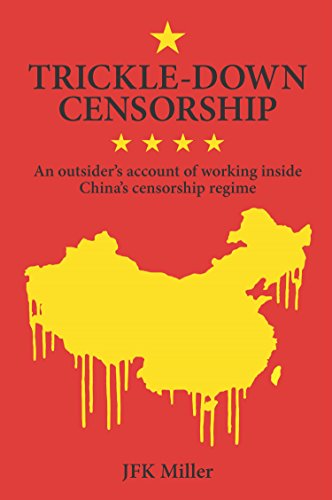 The story is a fascinating one. The saga of the That’s magazines will be familiar to most long-term expats in China due to the well-publicised story of how it was founded by Mark Kitto … and subsequently stolen from him. Kitto was a pioneer in the world of China expat magazines, and is well known for his own book China Cuckoo and an article on how laowai can never be Chinese. Kitto’s shadow looms large over the narrative in Trickle-Down Censorship. Though never referred to by name – he is always “The Briton” – Miller picks up the story from when he joined That’s Shanghai as editor in 2005 shortly after Kitto’s forced departure. We are immediately introduced to Miller’s opaque boss “Mr Li,” the person accountable for cutting Kitto out of the business and the main person responsible for ensuring the ever-watchful red pen is never far from Miller’s editorials.

And that’s where Trickle-Down Censorship becomes its own story. Rather than choosing to be a book about “What happened after Kitto,” instead we are treated to an insider’s perspective on the day-to-day dealings with the magazine’s censors. This is a wise move from the author. Instead of playing second-fiddle to another person’s story, Miller chooses to reveal what it is like to be a foreign journalist in a highly controlled communist country.

The author is humble about his limitations. He readily acknowledges that his main task was to provide fluffy city info to expats rather than being at the forefront of investigative journalism. This self-deprecation continues throughout the book. Though Miller bemoans the censorship and nonsense he had to combat daily, he is ever mindful that the magazine he steered was just a small, small ship within the ocean of Chinese authoritarianism.

Trickle-Down Censorship will provide few surprises to the Old China Hands out there. The insights on what is and what isn’t sensitive in the eyes of the CCP will not be revelatory to anybody who has lived in China for many years or worked within the journalism industry. However, what it does do is provide a fascinating, well-written and concise overview of Chinese censorship at both the micro and the macro level. Miller was new to China when he arrived in 2005, but he obviously invested his time well and is able to cite numerous anecdotes and stories about the smoke and mirrors of what China tries to present to the world; whether it be its obsession of deleting images of supposed poverty in China-based Hollywood movies (we’re looking at you, Mission: Impossible III), or hiding stories of the Shanghai stock market’s collapse.

Miller encounters several ludicrous situations similar to my Lei Feng cover. Early on during his tenure at That’s Shanghai he is almost forced to delete a map of China because it doesn’t feature the minuscule Spratly Islands, and is reprimanded by his censors to “not make fun of Chinese leaders” after using the phrase “Mao would turn in his grave.” However, the more insidious side of censorship soon begins to show its face. As any journalist operating in China will tell you, the biggest censor at That’s Shanghai was neither the official censors, nor “Mr Li”… it was none other than Miller himself. He quickly learnt to self-censor and edit out any potentially sensitive subjects before they ever even reached his censors. He writes:

Self-censorship is essentially self-preservation. The first law of nature is also the first law of self-censorship. Work goes into a story; work you’d rather not waste with a careless indiscretion that may fall foul of your censor. You often edit something questionable out of story in order to save the story; you sever a limb to preserve the body. You “murder your darlings”, not to rid the page of extraneous ornamentation, preserve a plot line or enhance pacing, but simply to maintain the life of a story. Plus you don’t want to waste other people’s time. You have freelance writers, photographers, designers, illustrators and editorial staff to consider. You don’t want to risk their hard work coming to not either.

Or, more succinctly: “Self-censorship is the true genius of the system.”

And there’s the rub. The truly Orwellian aspect of censorship is not only what is removed from the public’s sight, but the effect it has on writers themselves. If something potentially sensitive is never written, before it even gets to a censor, then the battle is already won. That’s the true power of censorship. I can totally understand the situation of people working in China like Miller who have no choice if they wish to continue earning a living. Sadly, more than one China-watcher has adopted this mentality even when not based in China and taken it upon themselves to be the country’s White Knight – “the Pollyannas who run the expat magazines assuming the burden of preventing China at all costs from losing face” as Isham Cook describes them. As an author who has had his own tell-all book on China rejected from review by both expat magazines and the Western mainstream media, I have more than a little understanding of the infection of self-censorship.

I recommend JFK Miller’s Trickle-Down Censorship for anybody looking for a glimpse within the machine that is the world of China’s censorious regime. It’s smoothly written with more than the occasional flourish of the absurd (an occupational hazard when dealing with CCP censors). It’s also a very timely book; the lessons of Trickle-Down Censorship are increasingly applicable to our own culture as well as China’s. Miller never won his battle against censorship in China – it was an impossible fight – but his description of the process and its effect on people has never been more needed.

Of course, the supreme irony is that there isn’t a chance in Hell that That’s Shanghai would ever review their former editor’s book on censorship.

Trickle-Down Censorship is published by Hybrid Publishers in Melbourne. You can buy the book from the publisher or from Amazon.

This is an abridged version of a review which originally ran on Arthur Meursault’s website.