There are good reasons why publishers’ submission guidelines often include a warning that short story collections are unwanted. The literary form is seldom bought, little read, and usually badly written. While I wouldn’t go as far to say that a writer’s preference for short stories is a sign of moral degeneracy, let’s face it – they’re a magnet for the lazy. I’ve never been a big fan; and, comfortable in my prejudice, I’ve never considered trying my hand at them. Until, that is, I read Simon Rowe’s delightful Pearl City: Stories from Japan and Elsewhere (2020). There are sixteen stories in total, six of them set in Japan, with others unfolding in Hong Kong, the Philippines, Cambodia, East Malaysia, Australia, and New Zealand. The stories have a variety of topics too, though most feature everyday folks striving for a slice of happiness. The characters are three-dimensional, the settings vivid, and the endings come with a fun twist.

The titular “Pearl City” is set in the Japanese city of Kobe. The boss of Tokai Pearls Limited, the biggest pearl dealer in Asia, calls in part-time private investigator Ms. Suzuki to look into a suspected case of pearl theft at his facility. Suzuki is a great character, the wrong side of forty but sassy. She’s a single mother, a hotel receptionist by day, glamorous but grounded.

To save the taxi fare she walked along Nankin-machi Street. The late-night ramen joints and the upstairs karaoke boxes resounded with drunken laughter, but the alleys that branched off it were sullen and cavernous with shadow.

She reached Sakaemachi Road, busy with westbound traffic, and feeling pensive, crossed over and continued south into the old financial precinct. Here the paving stones were wider, smoother, and the streets carried a whiff of the wealth and history they had accumulated from over a century of international trade. Sandstone and granite towered over her, corniced and classically hewn. Where no insurance company, bank or shipping office stood, an Armani, Porsche or Tiffany & Co. showroom glowed like a jewel in rock.

It’s a very satisfying story but one that leaves you wanting a full novel. We want to ride with Ms. Suzuki again. “Pearl City” is the subject of the gorgeous cover art by Jeremy Hannigan, a Canadian artist living in Japan. What a beautiful old pulp fiction noir image! The curvaceous beauty is Ms. Suzuki, and the silver fox with the sake is friend and intel source Teizo. 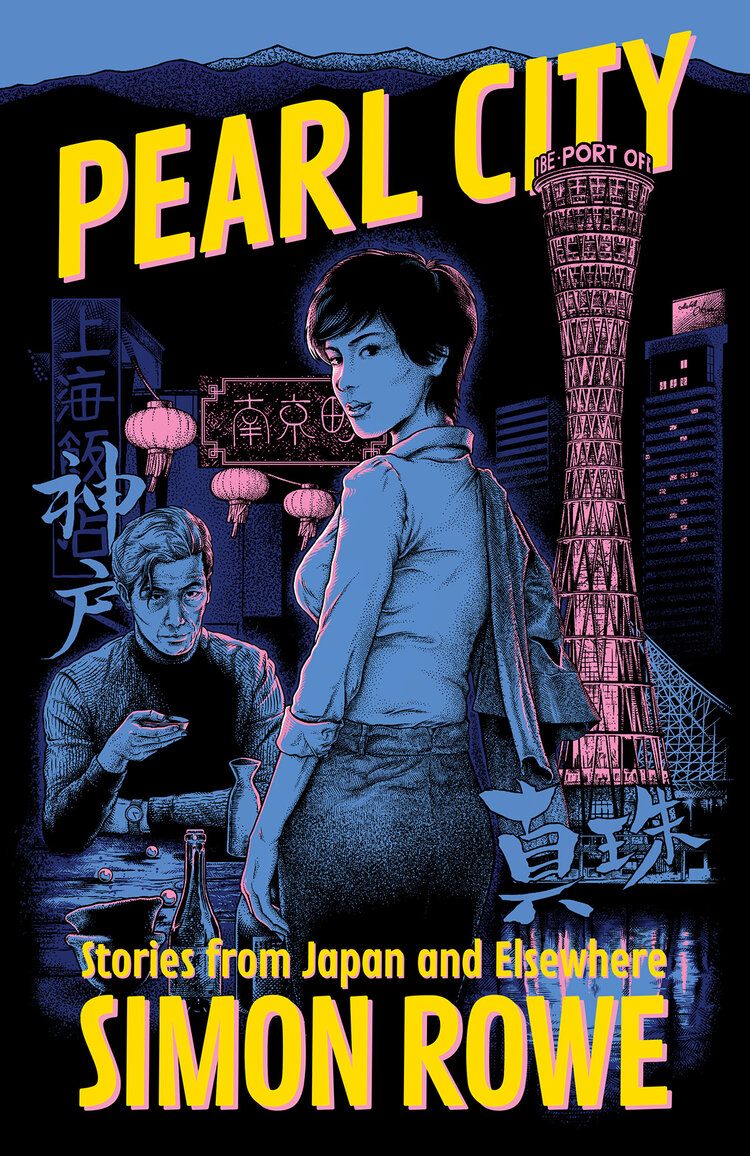 In “Oysters,” a 58-year-old Singaporean foodie “shipping agent” called Poh, who just so happens to be an assassin, flies into Hong Kong on his very last job before retirement.

A black Lexus sat idling at the end of the taxi rank, its exhaust steaming the night air. The driver was old-school: silver crew cut, permanent scowl, a real toothpick-chewer. His gaze met with Poh’s in the side-view mirror. He lowered his newspaper and the rear passenger door clicked. Poh pulled on the handle and climbed in. They exchanged single-syllable greetings and the car moved away from the curb to join the swirl of courtesy buses, catering trucks, rental cars and limousines leaving Chek Lap Kok island for Kowloon and the night beyond.

In Fictionland, last days on the job can go very wrong and this story is no exception.

“West Wind” is set in the mountains of Japan, and has a mysterious, incrementally spooky tone. We open with a slight sense of foreboding:

The October morning had dawned cool and still, and it gave him cause to wonder at the strangeness of the previous night’s weather. The wind had come from the west, suddenly and violently in the early hours, roaring like a freight train up the valley, felling old trees and fleecing young ones of their leaves. Then, as quickly as it had arrived, it had died.

In “Spirited Away” we meet middle-aged salesman after a night on the sauce: “rheumy eyes, uncombed hair, crumpled clothes and pall of death-by-shōchū hanging over him,” he stumbles to a public bathhouse. You’ll have to read the book to find out why he ends up running through the streets naked.

In “Holiday,” another Japan-based story, we’re with a newbie salaryman:

Ever since his induction into the Setouchi Shipping Company, Kugo had grimly accepted that his position in the corporate food chain amounted to something only slightly smaller than krill. His senior co-workers, the mullet heads, took advantage of this, heaping on the new recruits the most menial of tasks…

He takes a much needed holiday, on which two characters vie for interest: a mysterious stranger who seems to be following him (an industrial spy keen to get Kugo’s files for a new ship design?) and a hot middle-aged tour guide “in a 1960s-era powder blue air stewardess uniform, complete with a pillbox hat.”

Does the author have a fetish for air hostesses? In the last story of the collection, “Tenderloin,” which is set in an upmarket Australian club, we’re introduced to a somewhat downmarket staff member, a fifty-something Dot: “She wore her dyed blonde hair in a tight bun and her uniform a half-size too small, which helped her breasts defy gravity. She had a cabin attendant’s gait and a smile that turned off and on like a seatbelt sign.”

In “Across the Ditch,” (“the Ditch” is what we Antipodeans call the Tasman Strait, which separates Australia from New Zealand), we get what seems like the semi-autobiographical musings of a young teenaged Rowe as he heads to a new life in Australia.

Across the aisle, your mother checks your brother and sister’s seatbelt. She glances furtively at your father, who is beside you, then slumps back into her seat. Relief floods her face. You know what she’s thinking: Farewell to laundering sheep shit from rugby jerseys every weekend. Sayonara to butter-fried sheep’s brains. Adios to town hall dinner parties with all the intrigue of watching Dulux dry. Sixteen years of New Zealand rural life served—gone in a cloud of exhaust fumes, disappeared through the grimy rear window of a blue Toyota Corolla with three suitcases strapped to its roof. A teary-eyed goodbye to Grandpa, a road trip to Auckland, a last supper of pizza with relatives, then a few hours of sleep before the dawn taxi to the airport. She closes her eyes, exhausted.

The boy feels a mix of fear and excitement as he flies to Melbourne. In a cutting-to-the-bone slap of truth Rowe writes:

Yes, the boredom of small-town New Zealand, which Rowe left for big-town Australia (back “when orange Fanta came in glass bottles and AM radio was king”), was indeed, at least in pre-Internet days, a mental challenge. Now Rowe lives (and writes and teaches) in the samurai castle town of Himeji in western Honshu. I came across and was impressed by his writing when I was looking for contributors to Camphor Press’ Inaka: Portraits of Life in Rural Japan; unfortunately, mid-sized Himeji (home to half a million) didn’t qualify.

Pearl City: Stories from Japan and Elsewhere is an immensely enjoyable read. It’s a book with a lot of heart. Sitting atop his authorial Mount Olympus, or Japanese castle – ambrosia by his side I suspect from the many drink references in his stories – Rowe is not a capricious God toying with disposable mortals. He is kind to his characters (well, apart from a few he kills off), and fair with his readers too; there’s no unfair sleight of hand in the plot resolutions. The stories are satisfying yet leave you wanting to know more about the characters.

Although accessible, it’s also a writer’s book, with lots of craft to admire and phrasing aplenty worth stealing; it might even encourage you to try your hand at short story writing.

Pearl City: Stories from Japan and Elsewhere is published by Mighty Tales Publishing and is also  available from various retailers including Amazon.com.